Yesterday was my 25th birthday, and the hike Baron, Neal, Chase, and I did made it a birthday I will never forget. We headed to Schofield Barracks to climb to the 2,883 foot peak of Pu'u Hapapa, a hiking trail that is rarely used and unmaintained.

The morning started off gray and rainy, and it didn't seem like a good idea to do a ridge hike in the clouds, but we headed to Kolekole Pass anyway. While driving we could see that the whole mountain was covered in clouds. We parked, got our bags ready, and headed uphill. Miraculously, the clouds immediately began to thin, the mountain became visible, and blue skies began to show.

The first part of the trail contours right in front of the mountain on what is called the Honouliuli Contour Trail, and there are many ridges that can be climbed to gain the ridgeline. We headed up an extremely steep slope that had us huffing and puffing for a good ten minutes. From here the ridge route became obvious, and steep climbing resumed.

The first part of the ridge has little shade, and the second half is heavily vegetated. As the top neared we were greeted by a fence that the Nature Conservancy built to protect native animals and plants. The fence totally downgraded the hiking experience, and it also prevented us from advancing to Pu'u Kanehoa in the distance. If the fence was not there, the ridgeline past Pu'u Hapapa looked to be one of the nicest ridge walks I have ever seen; the whole mountain range could probably be hiked all the way to Pu'u Kaua and even to Makakilo, but that damn fence was built right on the narrow trail, making it dangerous to attempt. We sat at a flat clearing, ate our lunch, and headed back down.

I noticed a side ridge jutting out on the right on the way up, so we all decided to make that our return route. Little did we know that this return route was an extremely dangerous descent. The ridge became narrow at times, but the narrowness was the least of our worries. The ridge had two massive drops that we had to descend with no ropes, and it became obvious that this ridge trail was rarely used. The first drop was a hair-raiser, and foot placement on the near vertical rock face was doubly important. One slip would be fatal. The second drop was even bigger, but it didn't seem as dangerous as the first one. Fellow hikers actually watched us in anticipation of us falling. They snapped photos and were watching in horror and awe as we descended the second drop without any ropes. When we made it to the bottom of the second drop, we looked back, and it was only then that we saw the seriousness of the drop. We had not noticed that below the section we were descending there was a vertical drop 1,000 feet or so to the bottom of Lualualei Valley. Out of all the dangerous hikes I've done, this ridge was the most extreme. There are probably many crazy ridges somewhere else on the island, but the ridge route we chose is by far the most dangerous ridge on the island, in my opinion.

We exchanged high fives when we reached our car, happy be alive. Just outside Schofield was the local watering hole where we chatted about our brush with death over some beers, shots, and pupus. Buzzed and satisfied we headed back home. What a birthday. 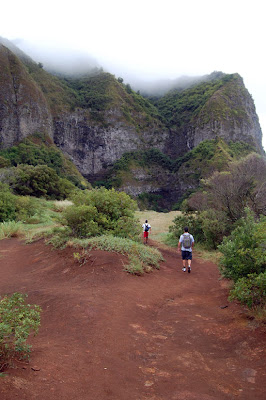 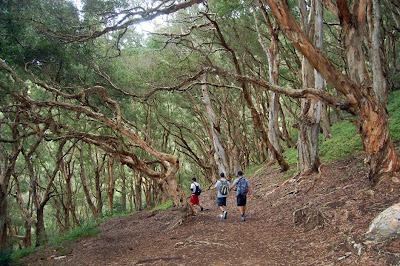 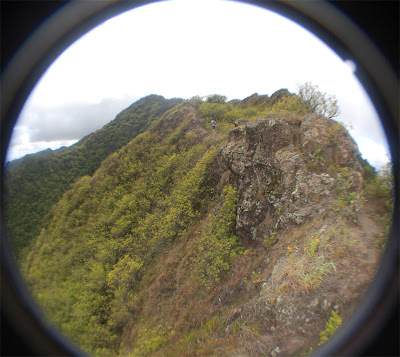 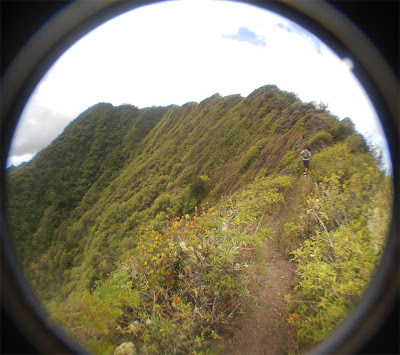 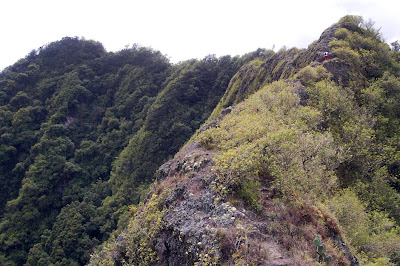 If you look closely, you can see Baron climbing on the ridge. 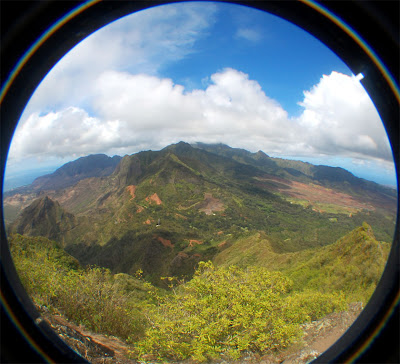 What a view. This is a shot looking toward Pu'u Kalena and Mount Ka'ala, with Waianae on the left and the North Shore on the right. 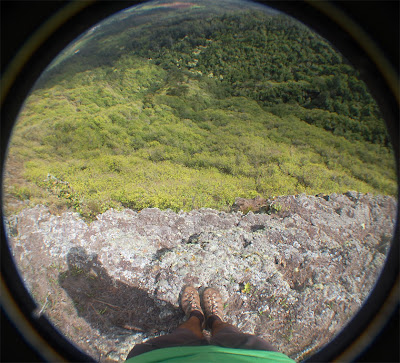 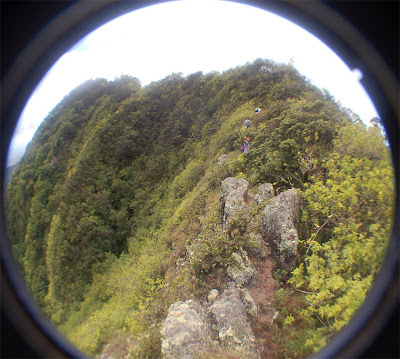 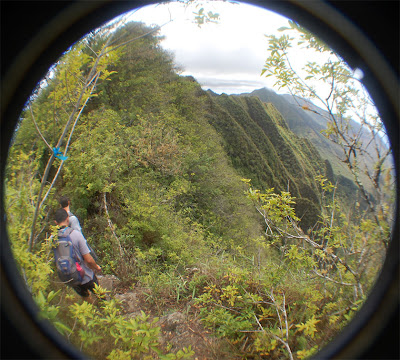 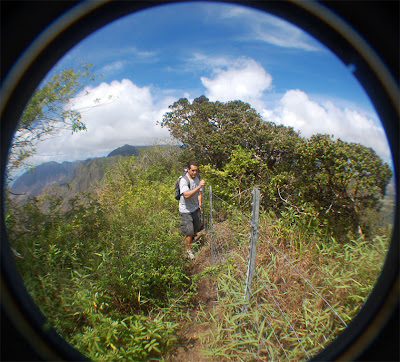 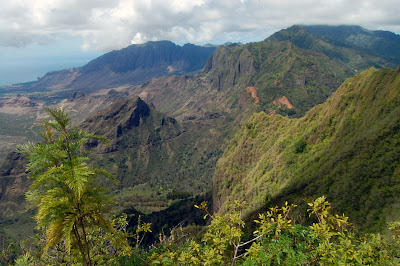 The view looking to the northwest atop Pu'u Hapapa. 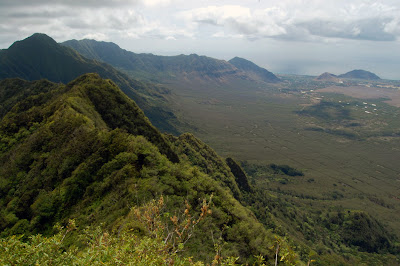 The view looking southwest. If you look closely, you can see the fence on the ridge. The Nature Conservancy means well, but they seriously ruined a great hike to Pu'u Kanehoa and Pu'u Kaua. 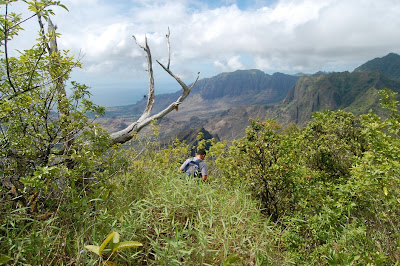 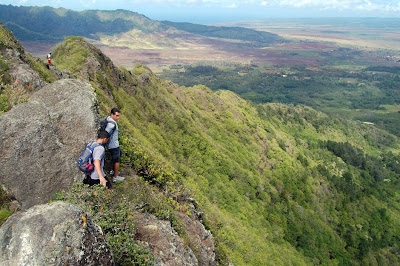 Neal and Chase edging around a rock face. 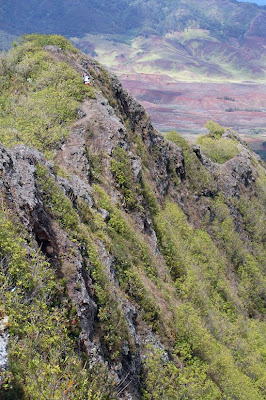 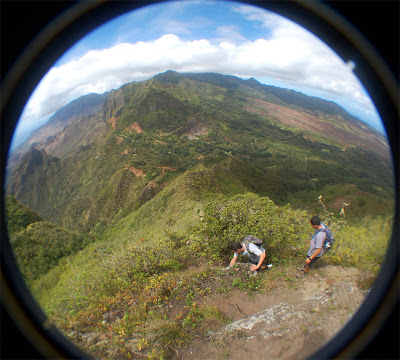 The junction of our return route. From this vantage point the ridge does not look dangerous at all; it just looks steep. 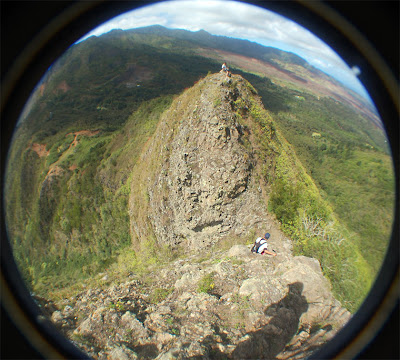 But the trail IS dangerous. Here's Baron negotiating his way down the first drop, with Neal watching from the other side. Notice the giant drop on both sides. 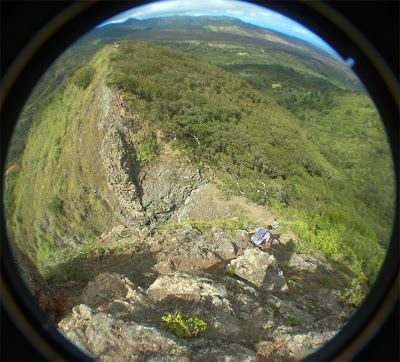 And here's the 2nd drop. You can't see it, and neither did we, but right below on the left is a vertical drop to the bottom of Lualualei Valley. 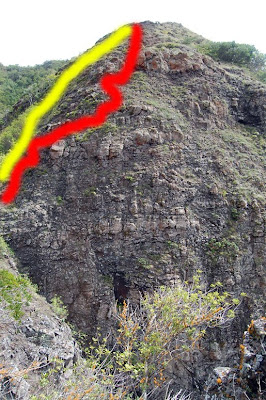 The yellow indicates the relatively safe route Baron took to negotiate the 2nd drop; the red indicates the route Neal, Chase, and I took. To the right is the vertical drop. As you can see, half way down the red route would be fatal if we slipped. 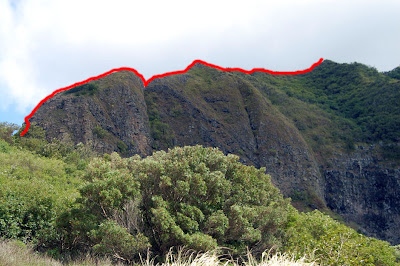 Here's our return route looking from the bottom. When we started the hike and looked up at this we thought it was impossible to hike on that ridge. Ironically, the ridge we chose to come back on was the one we joked about. The red indicates our route. I still can't believe we did it.
Posted by kaleo at 10/11/2008 12:28:00 PM

you guys are crazy!

Glad to see that you guys made it out alive from this one.