It was discouraging to drive to the Kahekili Ridge trailhead on Sunday. Heading down the H-3, we could see rain and clouds dumping on Kailua and Kaneohe. It was not a good sign being that we were about to hike one of the most dangerous trails on the island: Pu'u Manamana. But as we passed Temple Valley, the rain stopped, the clouds cleared, and conditions looked promising as we scoped out the horizon, for there were no clouds in sight. With the breezy tradewinds, the rain and clouds would be gone before the morning's end.

Six of us (Alison, Daniel, Marky, Matt, Justin, and I) embarked on a short but adventurous loop this past weekend. I had completed the loop with my friend Chase back in September of 2008. During that outing, I had a major hangover and not much sleep the night before. My recollection of the trail was that it was ridiculously taxing. The conditions that day were not so favorable for hiking: hazy, thick vog, light winds, and no clouds whatsoever. Sunday's outing was the complete opposite. Clouds sheltered us from the sun for the majority of the hike, the constant tradewind breezes served as natural air-conditioning, and the trail itself was dry and pleasant. What we once saw as a weather catastrophe along the road, transformed into perfect conditions for hiking.

The trailhead for Kahekili Ridge starts at the end of Huamalani Road in Ka'a'awa. A good place to park is at the Swanzy Beach Park parking lot directly across from 7-Eleven, which is only about 150 yards from Huamalani Road. A good landmark to spot is a tall satellite dish tower that stands next to Ka'a'awa Fire Station. Right next to these landmarks is Huamalani Road. Follow the road to its end and there is a trail in between two houses.

The trail juts into the valley for a short time until a marked junction appears on the left. The trail gets down to business right away with the aid of ropes to achieve the crest of Kahekili Ridge. Once on the crest of Kahekili there is an abandoned bunker. The trail from here gets exceptionally narrow. As the ascent heightens, there is a very narrow section just before some massive rock formations. The drop on the left is precipitous, as is the drop on the right, but the drop on the right masks the ever-present danger with vegetation.

After this narrow section is passed, the trail contours to the right of the massive rock formations. This is where the trail gets rough, slippery, and muddy, but at a slow pace, it can be trekked safely. Eventually, the trail hits Upper Makaua Valley (aka Hidden Valley) and its stream. There was a small, trickling waterfall, a sight I had not seen the last time I did the hike. Looking makai (seaward), we stood atop a larger waterfall which by my estimates couldn't be more than about fifty feet. From our vantage point, we could see that the waterfall was multi-tiered, and I wondered if there was a trail that could access the waterfalls from the bottom of the valley. I guarantee there is a trail there. I'll have to explore it some other time.

We sat and had a few snacks at the waterfall and then crossed the stream to an indistinct trail that would eventually hit the Pu'u Manamana trail. The trail was in pretty good shape; although, I could tell that the trail gets lesser hiker traffic than usual. Some sections along the trail were choked with head-high uluhe.

After about forty minutes of battling through thick uluhe on our uphill slog, we finally reach the junction with the Manamana trail. The option here is to turn left to either reach the "Turnover" or reach the junction that leads to the Kahana Valley graveyard, or turn right and head to the narrow sections of Pu'u O Mahie Ridge. We turned right.

And there I was once again, for the fourth time along Pu'u O Mahie Ridge. Every time I encounter the ridge it still is as exhilarating as it was the last time I trekked it. It's one of the few ridges on the island where the drops on both sides will kill a person if he or she slips. For those who have heard of the trail and have never done it, it's everything you can imagine and then some.

As we descended Pu'u O Mahie Ridge, we eventually reached the junction to Crouching Lion. This option came to mind as a faster route to get back to our cars because Alison had to be at work by 4pm. There is a steep trail that descends to Makaua Village just past the Crouching Lion. I did the steep trail descent with my friend Basil back in February of 2009 while trekking the short Crouching Lion Loop Trail.

The hike took around five-and-a-half hours to complete. Ideal weather conditions and good company made this trail outing one that will be hard to forget. Below are pictures from the hike and video footage I captured with my GoPro camera. I had video footage along Kahekili Ridge's narrow sections, but the housing was fogged at that time, and the footage came out pretty shitty, so I didn't use it in the video. The footage along Mahie Ridge came out awesome! Check it out. Rough outline of the route we took. 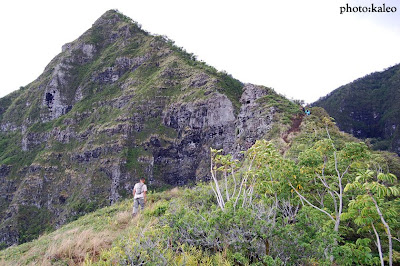 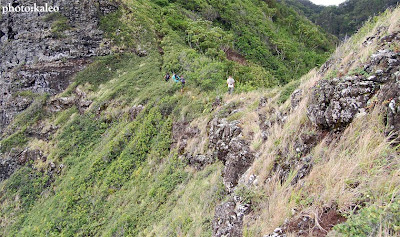 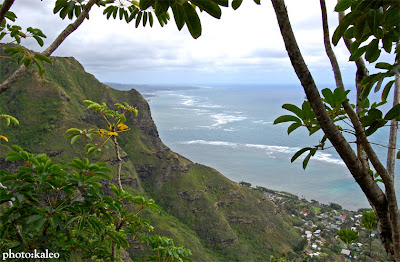 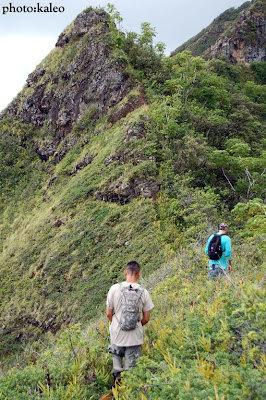 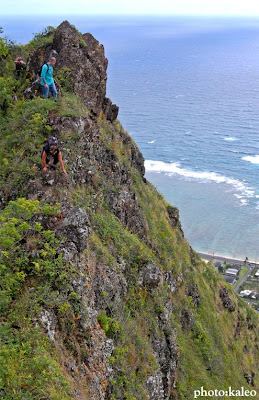 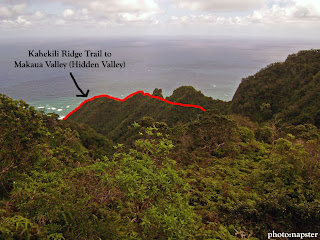 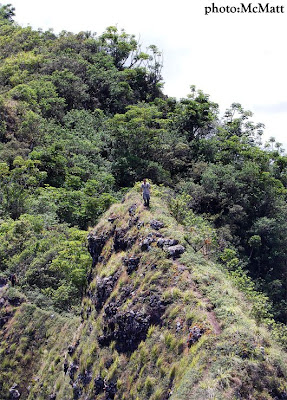 Marky on the ridge. 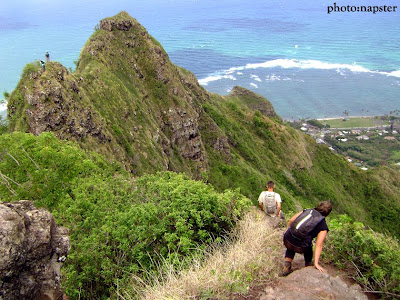 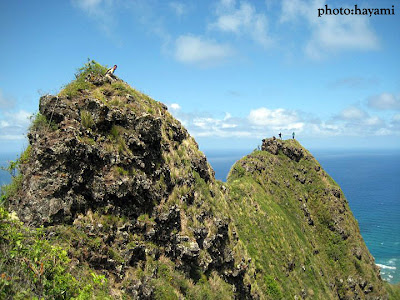 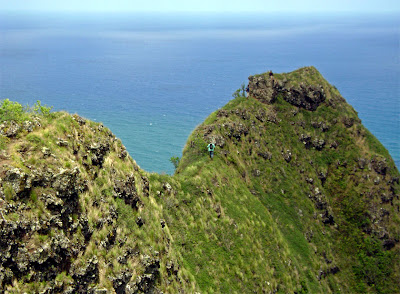 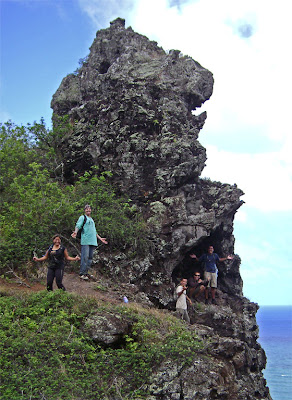 that was sick! do guys ever do the Manoa falls-aihuilama ridge trail?

never been to manoa falls or aihualama, but i have been around that area. i'll have to check it out one day...

We two finished this trail from Hamehameha HWY. It took four and a half hours car to car. Going down by Kahekili is better than "turnover" because the scene is visible all along the trail.

This was by far one of the nuttiest trails I've done. Super windy on the way up. Did you cross over at turnover and make the loop down cemetary ridge?

not on this particular hike, but i did do it last year in may...

nice hike. i wish i had more knowledge of that side of the island. aihualama isnt really a ridge hike its a trail that switchbacks up to paoua flats through dense jungle and takes about an hour or less for experienced hikers

awesome video clip of the hike! actually, it was insane! you guys are a big inspiration. keep it up!