Kahana Valley: home to some of the best hiking trails on the island. It's hard to believe that a valley so vast, on an island so populated, is virtually untouched by human development. Other valleys on the island are dwarfed in comparison to Kahana's profound and awe-inspiring beauty. And then there's Pu'u Ohulehule, the massive pyramidal peak at the back of the valley. Ohulehule's ominous and intriguing profile stands above its sister peaks: Manamana Turnover, Pu'u Manamana, Pu'u O Kila, and Pu'u Piei. As with all ridge-to-peak hikes in the valley, Ohulehule is the longest and toughest. At eight miles round trip, the trek to Ohulehule involves four stream crossings and a relentless uphill climb to the top. But the viewpoint at the top is well worth the pain and sweat, for it is one of the best views on the island.

Two people, Lei and Albert, joined me to tackle the brutal ascent to Ohulehule. The morning drive to Kahana Valley was a beautiful one, and the weather conditions were akin to the conditions when I hiked Koloa to Kaipapa'u a week prior. Only this time the wind was a bit calmer.

The drive to Kahana is long by Oahu standards when coming from the other side of the island like we did. Thus, our start time was a bit later than usual -- 9:30am or so -- and Albert had to be at work by 6pm. I was sure we were going to make it to our cars by then; I just wasn't sure if he would make it to work by then. So with a particular "hike curfew" set in place, completing the trail in due time would involve setting a faster than normal pace. Not a good idea for a hike that I heard takes about eight hours to finish given the steep nature of the ascent.

We reached the hunter check-in box and turned left, descending gradually down a dirt road. Soon after we encountered a small dam which we had to walk across to get to the other side of the stream. The water there was deep, and falling off the dam on either side would have soaked our camera equipment. With the water spilling over the dam, it was inevitable our shoes would get wet. We inch our way slowly across the dam, making sure to take caution along the slippery parts. After a successful crossing we advanced on what is known as the Nakoa Trail, the main valley trail in Kahana.

About sixty yards from the dam we encountered a junction where the Nakoa Trail goes straight and a trail comes in on the left. We turned left and followed the trail to another obvious stream crossing, this time without a dam. I was the first to attempt the ford, and the water level was a couple inches above my knees at its deepest. Lei and Albert followed suit.

The trail soon reached an exposed area. It was at this exposed area that we made a left turn and began a gradual descent along a luch, beautiful ridge to Kawa Stream. At Kawa Stream we would make our fourth crossing. The stream was narrower than previously, so crossing by hopping on rocks to our shoes dry was the call.

Immediately after crossing Kawa Stream the trail turned sharp right. From here the trail was all uphill with only several level sections to relax our lower limbs. Along the way we encountered many, many ropes. the last section to the top was no exception.

The thing about the Ohulehule trail is that once you reach a certain point along the trail -- in this case, the fourth stream crossing -- it gets steeper and more difficult until you reach the top. Some sections were just ridiculous, and without ropes there was no way to advance further going up or down. Luckily, there are ropes on every section along the steepest parts of the ridge, so it instills a sense of security and confidence during the taxing ascent.

We finally reached the top of Ohulehule a little after 1pm. The view was obscured by clouds at first, but in a couple of minutes the clouds cleared and we had an awesome view of Ka'a'awa Valley, Pu'u Kanehoalani, and Kualoa directly in front of us. It was such a grand view that it made us forget the trails we had to endure on the way up. The hike back down was a heck of a lot faster than the hike up. We made it back to our cars at 4:50pm, just enough time for Albert to make it to work.

There is another way to climb Ohulehule: it's from the infamous southeast ridge in which hiking guru Stuart Ball, author of "The Hiker's Guide to Oahu," claims it to be "the most dangerous hike on the island." The route we took ascend the peak from the northwest ridge. Another route that looks doable but really steep is the ridge that connects Kanehoalani to Ohulehule. It looks very doable from the saddle, except for extremely steep sections when nearing Ohulehule's apex. I'm not sure if anyone has gone up from that route, but if anyone does know if it's been done, please let me know. Also, the section between Pu'u O Kila and Ohulehule loks doable as well, except for a steep climb to eventually gain te crest of the northwest ridge about one-third of a mile below Ohulehule's summit. Again, if anyone has info on anyone that has hike Ohulehule from Pu'u O Kila, leave a comment or drop me an email. 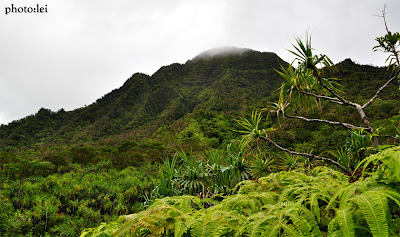 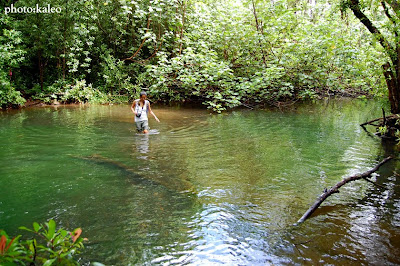 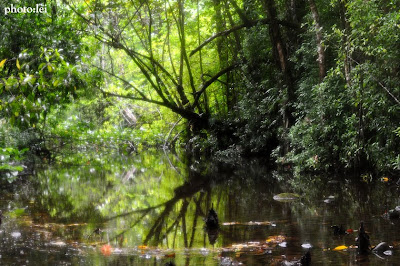 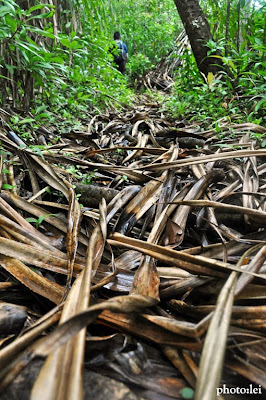 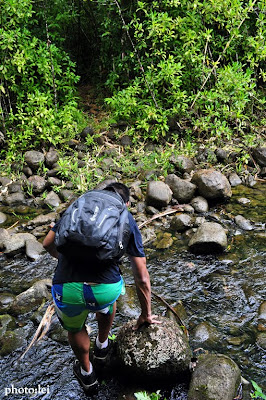 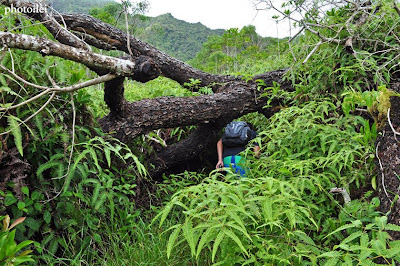 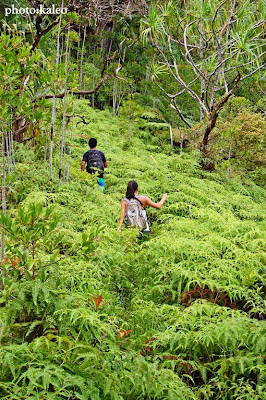 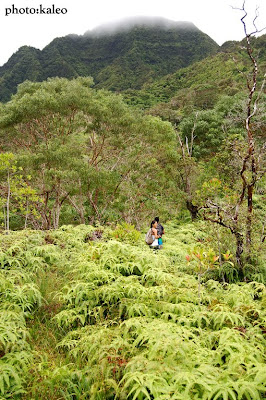 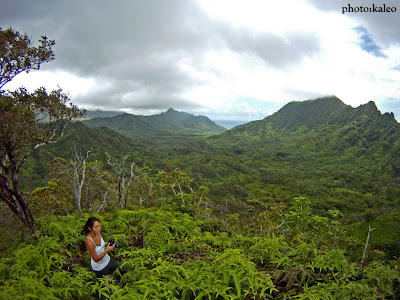 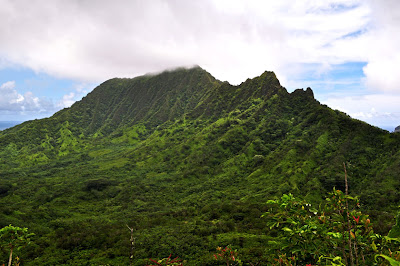 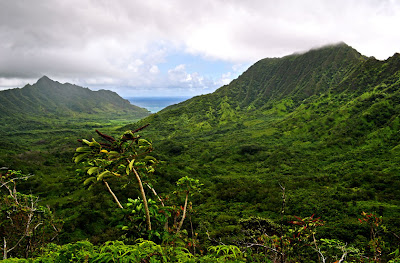 Pu'u Piei on the left.  Manamana Turnover on the right. 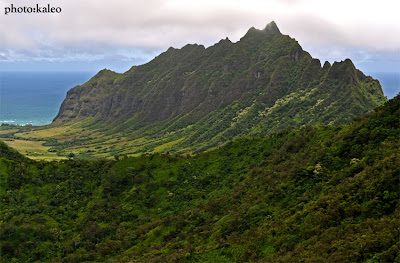 Looking over the Kahana/Ka'a'awa Valley saddle to Pu'u Kanehoalani. 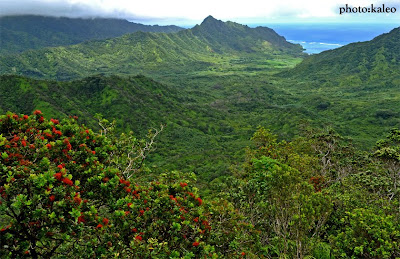 An lush ohia tree with a view looking toward the entrance of Kahana Valley. 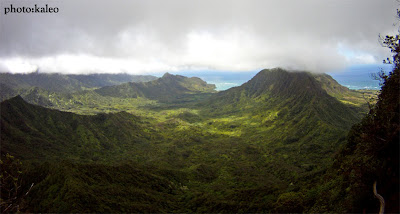 View along the summit ridge. 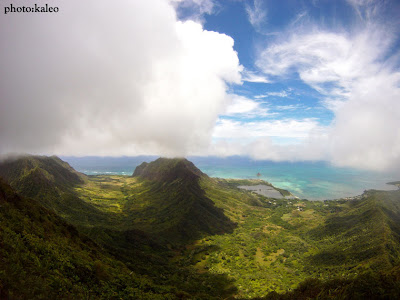 View from the top of Ohulehule, shot with my GoPro camera. 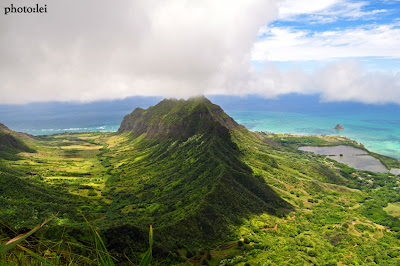 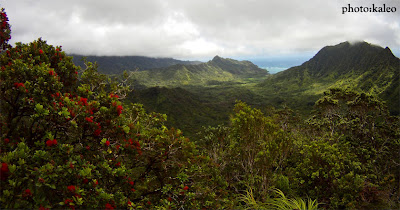 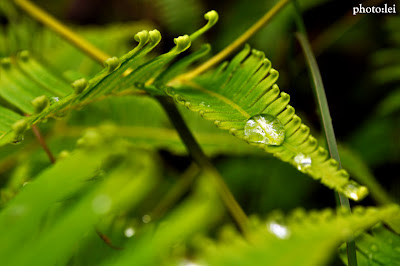 Click on this picture to see a larger version of a panorama Albert shot from the top of Ohulehule.

Sorry, can't get that damned email link to work. We're planning on doing Piliwale next weekend. I know you had an accident last time, so I figured you'd like to try again. Two tried last week. One made it. 173hiking@gmail.com