Hamama Falls has been on my to-do-list for quite some time. I've heard a lot of good things about it, and by some, it's even considered a "secret" waterfall hike. Truth is: Hamama Falls is far from secret. For the sensitive folk, I'll be nice and keep the location hush-hush. However, with a little internet research, those of you who want to know where it is can find it easily.

The trail to Hamama Falls follows a dirt road the entire time. I loathe dirt roads, but this road is not that bad. Although much of the views along the road are obscured by tall vegetation, the sound of the stream is always audible. At some points along the road, it's possible to visit the stream when you wish. There is even a crystal clear swimming hole on the left about ten minutes from the start of the road.

The trail is not at all strenuous, and it is a perfect family hike. There are a few hills along the road that gain elevation gradually, offering a bit of a workout until you reach the destination. About half-an-hour from the start of the trail and you'll find yourself at Hamama Falls, a 40-foot cascade spilling from the Ko'olau's in the back of Waihe'e Valley. The swimming hole at the bottom of the waterfall is shallow but swim-worthy.

As a bonus, my hiking partner, Keith, and I set out to find a second waterfall: Waihe'e Falls. The trail to Waihe'e Falls starts at a huge banyan tree. From Hamama Falls, retrace your steps back on the road and keep an eye out for a large banyan tree on the left. Cross the stream, then follow the stream makai (seaward), hugging a low ridge to the left. As the ridge tapers off, veer left away from the stream and look for a faint trail heading mauka (mountainward). Follow a grove of lauhala with the stream audible on the right. Climb gradually until the sound of rushing water becomes louder. Push through some vegetation and you'll see a 10-foot waterfall cascading from above. A trail along the right side of the waterfall climbs to the top of the waterfall, with a shallow swimming hole and a view of a higher falls. These falls are not as magnificent as Hamama, but Waihe'e Falls is a waterfall that very little people know about. Give it a try. Keith and I marked the route with orange ribbons. 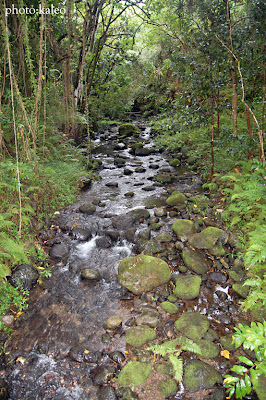 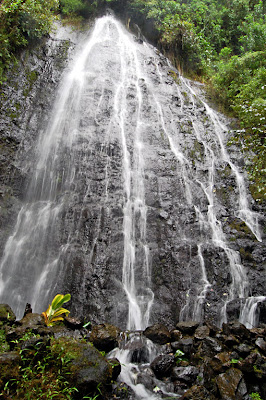 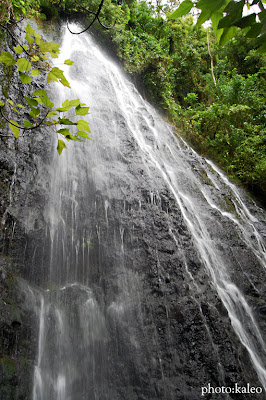 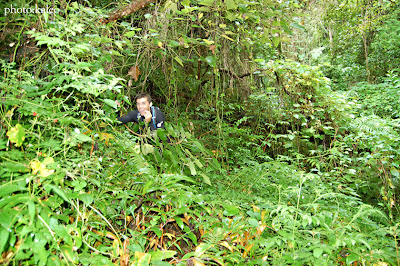 Keith, the only person I know that hikes in a rashguard. 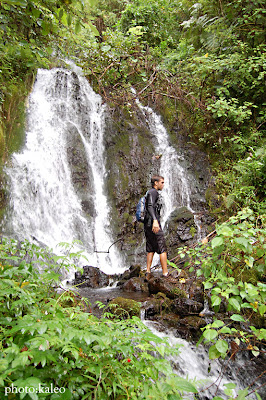 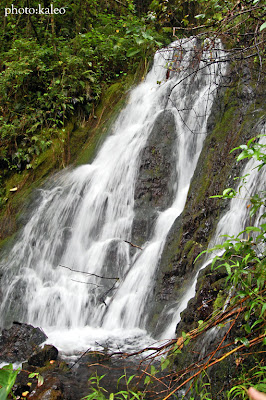 great blog, is there anyway you can tell me where this place is at, i've been looking for the last 3hrs and there's nothing on where it is? if you an help me out with this send an email to rluis99@hotmail.com

Nice overview of hike, which our group plans to do this weekend. Mahalo for the great pics, too!

Hamama falls were pretty impressive. Found most of your orange ribbons trying to find Waiahe'e falls, but gave up in the thick vegetation. It was hard to figure out exactly where to cut in to see the falls. We could hear the water rushing on the right and normally would have kept looking, but the rain and mud-sliding forced us to turn back today. It was an adventure though. Thanks for sharing!

Honolulu Board of Water Supply said...

As a reminder to the public, the Hamama Falls trail (Oahu, HI) is closed. This trail and the water fall are located in a watershed area managed by the Honolulu Board of Water Supply (BWS). The location is on government land, with no trespassing signs and cameras positioned along the trail. Please obey all posted signs.

Anyone attempting to reach Hamama Falls would be trespassing and subject to citation by the Honolulu Police Department. The land surrounding the falls support Oahu’s fresh water system, which supplies the drinking water resources for more than 1 million people on island. As such, BWS does not permit access of any kind so that the watershed stays pristine. Those cited are required to make a court appearance and may face fines up to $2,000, community service, and/or up to six months in prison.

As you plan your outdoor activities on Oahu, please respect the island’s fresh water resources by not intruding onto protected watershed land. Announcements regarding closures of or conditions on public trails managed by the State of Hawaii may be found online at hawaiitrails.hawaii.gov.