Happy new everyone. This is the first posting since November 2010. My short break off of the trails was a needed one. The surf was good, and it still is, but sooner or later I had to get back in the mountains. And I did just that this past weekend.

I finally completed the summit connector between Kawiwi and No Name peak this past Sunday with some of the best company that anyone could ask for. The roster is long, so bear with me: Nate Rubio, Ryan Chang, August Smith (the only person who knew the route), Lei Yamasaki, Mark Seto, Kale Tulang, Nate Yuen, Duc Ong, Brian Bautista, and Albert Carcueva. It was a perfect day to ring in the new year. It was also Albert's 32nd birthday. The weather was heaven-sent in the morning with overcast skies, then turning to clear skies and cool breezes in the afternoon. Definitely one of the more memorable hikes I've done. It also reigns as one of the best loop hikes I've done on the island so far.

Kawiwi (elev. 2,975 ft.) is the not so high peak beyond the top out point of the Kamaileunu trail. There are three routes to climb it, two of which are relatively saner than the third. The first route is done by either ascending the Waianae Kai trail, Kumaipo trail, Tiki Ridge, or Ironwood Ridge. The more direct route is Ironwood Ridge, which tops out along the narrow summit ridge between Kawiwi and No Name. Waianae Kai, Tiki, and Kumaipo top out at different points along the summit trail to the east of No Name. The second route veers left at an inconspicuous spot at a certain utility pole along the road. After crossing the stream, the broad, grassy base of the ridge is reached, and steep climbing begins. The third and most dangerous route is done by dropping down past the terminus of the Kamaileunu trail.

The route we took on this day was the route that turns left off of the road. It is definitely the best route out of the ones I just mentioned. It offers up a bit of a challenge as the trail gains elevation, involving plenty of scrambling, route finding, and bushwhacking. There is a swath, however, and old ribbons can be spotted occasionally. Much of the vertical rock faces are bypassed with obvious contour trails to the left or right; of course, it is possible to climb the rock faces instead of contouring.

After about two-and-a-half hours, we finally reached the top of Kawiwi. It is a great place to have lunch and enjoy the views of Makaha Valley, Waianae Valley, and the neighboring ridges and peaks in the distance. The area is broad and grassy, and it can easily accommodate a group of twenty people.

From Kawiwi we made our way east along the summit connector toward No Name. The summit connector is narrow, with massive drops on both sides. At the most dangerous spots, there are anchored straps for added security. Further down, the ridge drops very steeply with a fence sitting directly atop the crest. The fence, installed by the military, prevents goats and pigs from destroying native plants in the area. Although fences are usually a nuisance and eyesore to hikers, it was especially helpful when descending the steep drop.

With the fence section finally behind us, we reached a large boulder section. The boulders were surprisingly smooth even when dry, making it a bit tricky to navigate through. August had thought about installing a rope at a certain steep part at the very end of the boulder section, but it wasn't needed, and every one made it through without incident.

We then reached a breezy ironwood grove along the ridge. To the right we could see ribbons marking the route down Ironwood Ridge, which would be an apt bailout option for those not wanting to push on further to No Name.

It is relatively safer past the ironwoods than what we encountered throughout our jaunt along the summit ridge. The ridge broadens, and the vegetation begins to thicken. The climb to No Name is semi-steep, and it was apparent that this particular section gets its fair share of hiker traffic, for I noticed an obvious trail and ample spots to place our feet. At around 2pm, we finally topped out at No Name. Our way back would take us down Tiki Ridge, which would eventually lead us back to the road and to our cars.

At 4pm we made it back to the parking lot. Some food and drinks were waiting in a cooler in the back of Albert's car. Lei made some awesome salmon musubi's, and Albert brought some killer spinach dip with crackers. We tipped a few Four Loko's as well, chatting about the hike, past hikes, and future hikes, all while listening to some Hawaiian music over Brian's radio until the sun went down. It was a perfect cap off to an epic first hike for 2011. I'm looking forward to what else this year has in store. 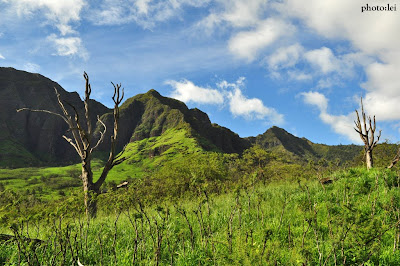 As green as it gets in Waianae Valley.  Peaks from left to right: Kamaileunu, Kawiwi, and No Name.  (photo: L. Yamasaki) 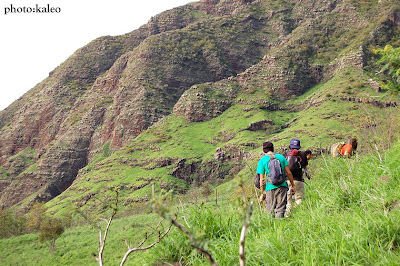 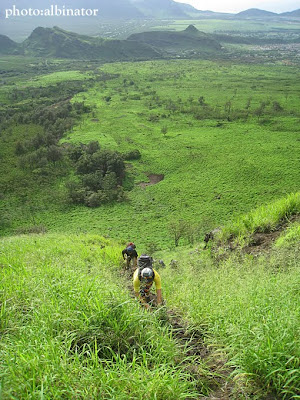 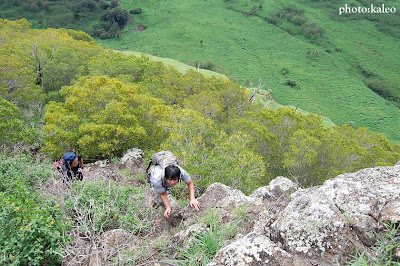 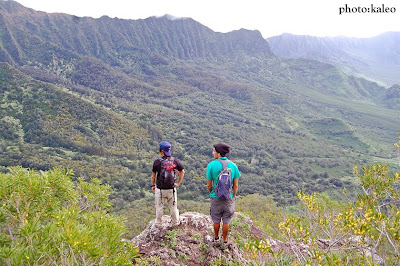 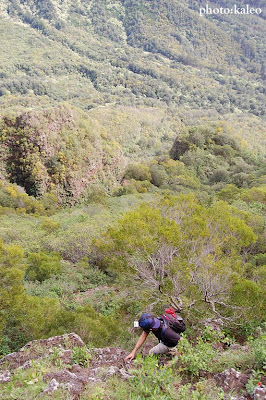 Inherent danger still existed even when contouring around rock faces. 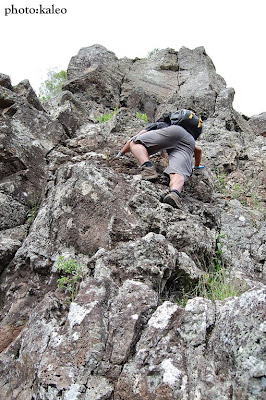 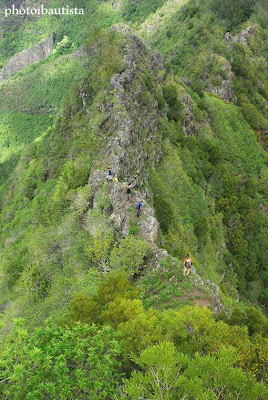 Looking down at the summit ridge from the top of Kawiwi.  (photo: B. Bautista) 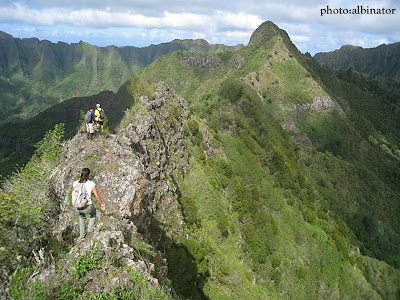 Making our way toward No Name peak along the narrow summit ridge.  (photo: A. Carcueva) 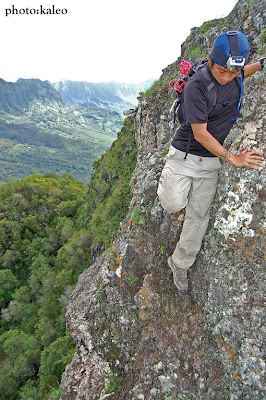 Nate Rubio, contouring around a rock face with a huge drop to his right into Waianae Valley. 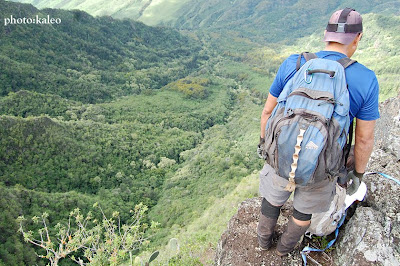 Nate Yuen, standing in line, waiting for Lei to ease her way past a roped section with Makaha Valley in the background. 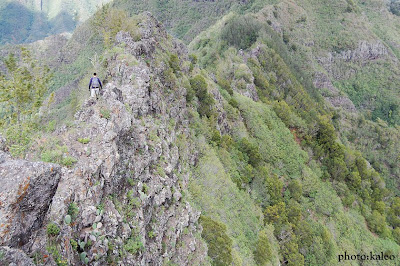 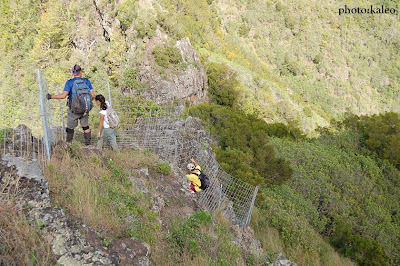 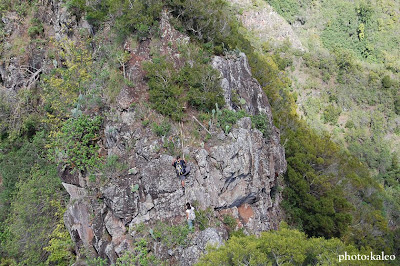 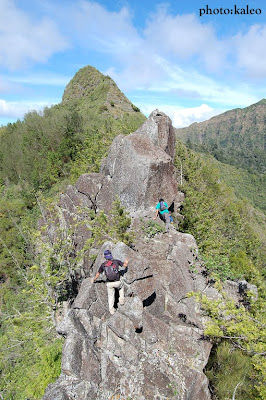 The large boulder section just before the ironwood grove. 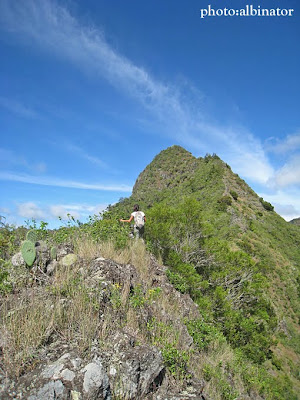 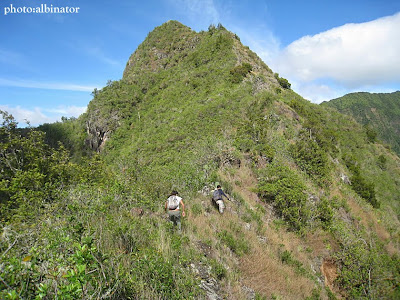 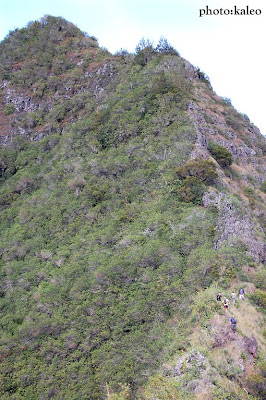 Final climb to No Name. 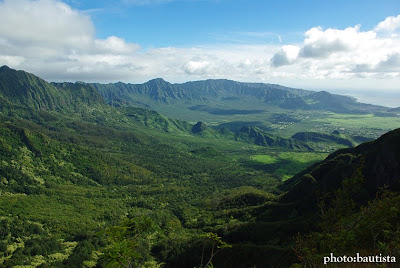 The recent occurrence of heavy rains prompted a more than normal green landscape in both Waianae Valley and Lualualei Valley.  (photo: B. Bautista) 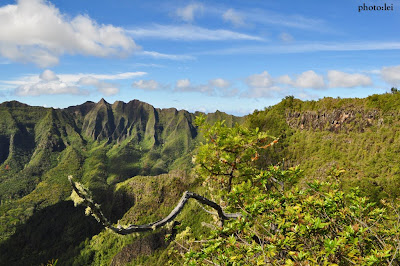 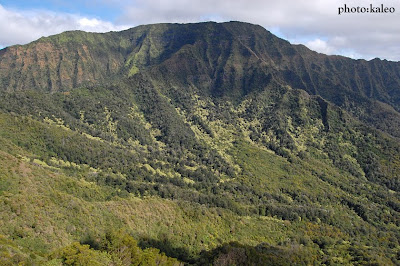 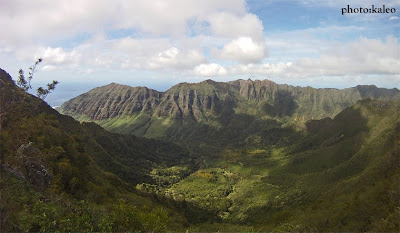 You guys do some crazy stuff, are any of the participants of this hike in the HTMC?

ack, four loko's make me totally sick, they make them in wisconsin a town near where i grew up, i thought they were banned here?? anyway glad to see you are back to hiking, gives me something to read again :) stupid work has kept me from getting out much, and i love how it seems to rain on my days off :-/

Duc, August, Lei, and Nate Yuen are in HTMC