Standing tall at the back of Kahana Valley is the pyramidal peak known as Pu'u Ohulehule (elev. 2,260 ft.). Although it's not as tall as other peaks on the island of Oahu, it still takes a lot of strength, cardio, and a big chunk of the day to hike. There are four routes to climb Ohulehule, the northwest ridge being the most popular. The other climbable routes are from the southwest ridge, the northeast ridge, and the southeast ridge. Stuart Ball, author of the highly successful "Hiker's Guide to Oahu," claims the route to the top of Ohulehule along the southeast ridge as "the most dangerous hike on the island." Our planned route would take us up the southeast ridge and down the northwest ridge. It was the toughest hike we ever did.

The southeast ridge of Ohulehule gets little to no hiker traffic at all. It is narrow, very steep, and extremely overgrown with vegetation. The route was used by the Hawaiian Trail and Mountain Club until an outing along the ridge caused a hiker to fall off. After the incident, the HTMC vowed to never hike the southeast ridge again, and the trail went into disuse.

Despite the foreboding incidents, Nate Rubio -- gung-ho as always -- asked if I was down to ascend the southeast ridge and descend the northwest ridge. I jumped on the opportunity and invited two other people to join us: Kelven Del Rosario and Kale Tulang.

Kelven picked me up in Wahiawa at 5am. We headed to Kahana Valley to meet Nate and Kale. Nate parked his car just outside the Kahana Valley housing community and hopped in Kelven's car with Kale. We then drove to an unnamed road at the very bottom of the southeast ridge leading to Ohulehule that separates Waikane and Hakipu'u Valley. We parked on the unnamed road, and at 7am, walked to the road's end where a concrete barricade blocks further progress for vehicles. Not going beyond the concrete barricade, we took a right and headed uphill into the forest, eventually intersecting a well-defined trail coming in on the left. We broke out of the forest and caught our first glimpse of the awesome views from above of the surrounding area. The day's weather was hot, cloud-free, and lacking any form of breeze: good for views, but the major cause of our heavy and persistent perspiration. Further along the ridge, we spotted an ironwood grove, our first out of many rest stops. Ohulehule in the distance, was a far, far way, and free of clouds at its summit.

The trail then began to undulate, becoming more vegetated but still with a discernible path to follow. The ridge itself began to narrow as well with sizable drops into Hakipu'u Valley. An hour-an-a-half had lapsed, and we reached our second rest stop at yet another ironwood grove. Beyond the second ironwood grove, the trail seemed to disappear altogether and we found ourselves contouring while following pig trails. The contour trails were especially necessary at large dike formations. From afar, the imposing dikes looked intimidating to climb; however, upon closer inspection, pig trails contoured to either the left or right sides.

We eventually reached an old white rope leading off the southeast ridge to a spur ridge coming in from Hakipu'u Valley. There wasn't much of a trail near where it intersected the southeast ridge, but well below was nice open ridge that I'm sure was or can be used as a shortcut to gain the southeast ridge. Beyond this junction we spotted a very faded pink ribbon covered in moss. More ribbons were spotted along the way, also faded and weathered. The trail now was gone.

A huge dike section, a hundred feet or so, stood before us. It was definitely climbable, but we all opted to contour to the right. Shortly after the contour we were finally at the base of the steep and final climbs to the summit of Ohulehule.

The first several climbs were very steep over a very narrow ridge. At one point the ridge narrowed to two shoe widths! Also, there were very old ropes and cables installed where it was needed, and some were so old that it frayed with the slightest tug. A spectacular and unstable boulder section made up a portion of the ridge. We installed a rope at the first boulder; it wasn't necessary, but Kelven had a hard time climbing it so we installed one for him anyway. The rest of the way up the boulder section is roped as well. What makes the boulder section so frightening is the drop into Hakipu'u Valley on the right and the hidden drop into Waikane Valley on the left. The exposure at the boulder section is the "real deal." One mistake, and it's over. Kelven never experienced anything so mentally taxing in his entire life, so Nate and I had to coach him, step-by-step, handhold-by-handhold. Nearing the top of the boulder section the grade of the climb got even steeper. Coupled with vegetation directly in the path of the ropes, it was difficult maneuvering our bodies to progress further upward. It was at the top of the boulder section where I pulled on a yellow rope and it snapped. Luckily, I was near the top where the yellow rope was anchored, so I was fortunate to make the split second decision to fling my arms up to the tree the rope was attached to. If I had been further down, I would've slid down slope quite a ways, or maybe even off the Waikane side of the ridge. The cables were the most trustworthy during the ridge climbs. And the most trustworthy cable was installed at one of the toughest climbs I've ever encountered.

After the boulder section is the last climb to a false peak. The climb is over the softest, most unstable terrain I've ever hiked on. The rock, too, is mind-boggling brittle. The slightest touch or step and the ground crumbled below our feet. I was last in line to tackle the steep section, which I estimate to be about 130 feet or so of unnerved climbing. Kale and Nate made it up without a problem. Kelven on the other hand had major trouble nearing the top of the climb. Dirt and rocks fell from under his feet all the way to where I was. He let out a cry for help.

His upper body strength could no longer support his weight along the rope. Nate and I told him to rest and to regain his confidence. Surprisingly, after a quick rest, Kelven pulled through and made it to the top of the cable. I was next. As I was going up I was shocked at how physically taxing it was. My arms and upper body was burning, and I had a long way left to the top of the cable. I situated myself on an unstable dirt ledge to the right for a quick break before the ground below me all of sudden gave way. At one point I was just dangling, dirt and dust flying in my eyes, sweat dripping off my chin. With every last bit of energy I had left in me, I pulled myself up with only my arms, relying on the cable to hold all my weight while the ground disintegrated below me. I made it to the top. I screamed out a "fuck you" and plopped myself down on the nearest flat spot above the cable.

Just after the false peak the ridge leveled out. The vegetation was still thick, and the hardest part was now behind us. The last section to the top was a minor scramble over grass, and before we knew it, we reached the peak of Pu'u Ohulehule at 2:30pm, seven-and-a-half hours from our starting point. Descending the northwest ridge felt amazing, primarily because there was an actual trail, and the ropes for the descent were in awesome shape. When asked how the northwest ridge felt compared to the southeast ridge, Kelven replied, "This shit's a playground!" When we reached the first stream crossing at the bottom of Kahana Valley, we lowered our body temperatures by drenching our skin in the cool, clear stream water. Nate even jumped in with all his clothes on. It was revitalizing and refreshing. From the stream we made our way to the Nakoa Trail, crossed a dam, and made it back to Nate's car at 5:30pm. 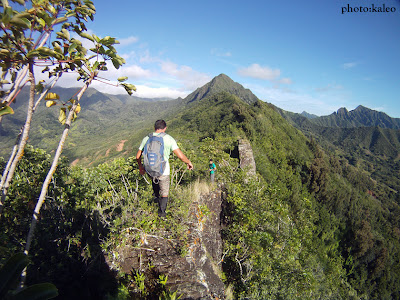 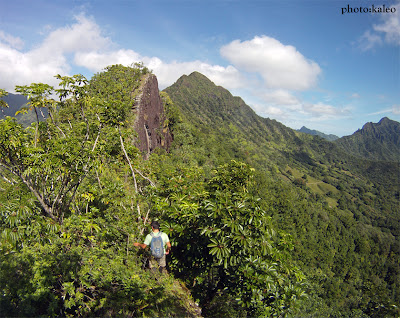 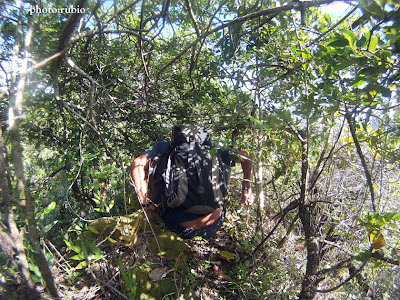 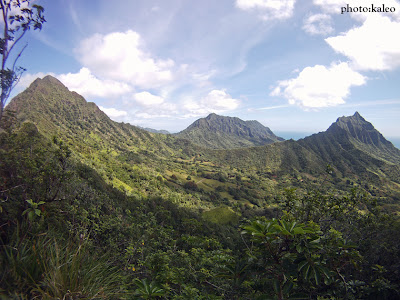 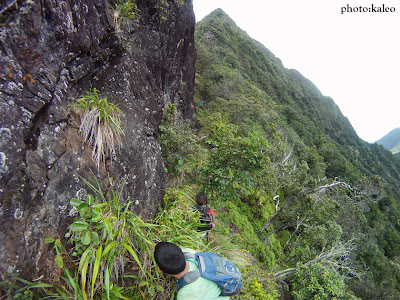 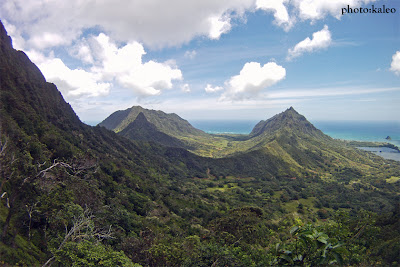 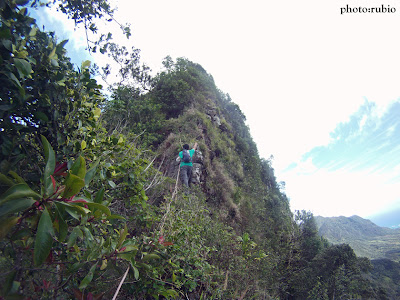 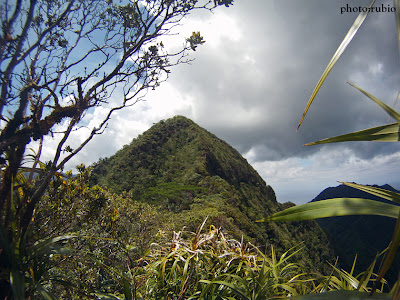 The view of Ohulehule from the false peak.  (photo: N. Rubio) 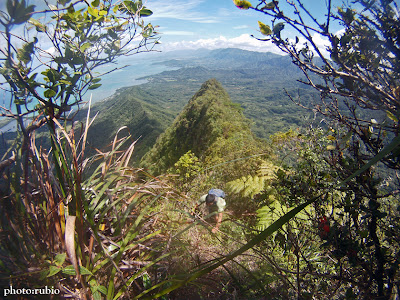 Amazing hike! Looks mental going up. I'm thinking about hiking Ohulehule on Friday, but not from the south like you mountain monkeys. :D

Growing up on the windward side, I've always looked at Pu'u Ohulehule and wanted to climb it, specifically from the southeast ridge. About two years ago, I scouted the trail to the ridge and attempted the hike by myself. I made it all the way to the point where things get vertical, at which point common sense kicked in. That drop to the left into Waikane almost got me. Probably the most scared I've ever been. If I had someone else with me, I probably would have pushed on, but I don't regret turning around. Hats off to you for nailing this!

Kaleo -- looking back now, how bad was that climb to the false peak? Can you just grind up in one shot? Is it comparable to the final section going up Bear Claw? Would it be pretty doable with spikes? Thanks.