A couple weeks ago I was fortunate to have completed a portion of ridge that I thought was un-hikeable.  Thanks to an invitation by Pete Clines, who actually did it about ten years prior, my preconceptions were shot down, and what I thought was un-doable, turned out to be doable.  In fact, it was more enjoyable than I had expected.  Coupled with an awesome crew and great weather, it is now one of my favorite loop hikes.

Pu'u Piei is a peak situated on the northwestern wall of Kahana Valley located on the northeastern side of Oahu.  The main trail to Pu'u Piei climbs a steep spur ridge then takes a left to the actual summit of Piei.  Few, if any, turn right and take the little-used route heading makai (towards the ocean) along a craggy, tooth-like ridge.  From the bottom of Kahana Valley, looking up at the "teeth," the makai portion heading away from Pu'u Piei looks a bit menacing, and a tad crazy.  But with a little rope and meticulous hand and foot placement, the ridge offers up a good upper body workout, with insane views of Punalu'u Valley, Kahana Valley, Kahana Bay, and the coastline leading from Punalu'u to Kahuku.

On hand was a crew of seven, including myself: Pete Clines, Chenay Borja, Duc Ong, Rosie Ho, Dave Webb, Laredo Muredo, Chase Norton, and Ryan Chang.  We met at the Kahana Valley parking lot nearest to Kamehameha Highway around 8:30am, headed on foot a short ways into Kahana Valley, and took a right on the road that lead us to toward the Pu'u Piei trail.  The last time I did Pu'u Piei I miraculously found the main trail leading to the top.  I say "miraculous" because for those who have tried to find the main trail to Piei for the first time would definitely agree that it is difficult to locate.

The same thing happened to us this time around.  Following an obvious trail below the spur ridges, we sparked the notion that we were headed the wrong way toward the fishing lookout known as Kapa'ele'ele Ko'a.  Little did we know that if we hit the lookout, we would've hit the main Pu'u Piei trail.  Instead, we backtracked and crossed a dry stream, then resorted to following the stream uphill.  Once out in the open we could tell that we were on the left side of a broad ridge clad with uluhe.  Our errant decision didn't threaten our forward progress, for we knew that if we pushed uphill through the uluhe, we would eventually link up with the main trail leading up to Piei.  After a tiring ten minute bushwhack uphill, we finally hit the main trail.

Relieved, we sped our way up the spur ridge and topped out a little past 11am.  Duc and Chase decided to tag the peak of Piei, while the rest of us took a rest and waited for their return.  A quarter before noon we headed makai towards the teeth.  Dave decided to call it a day and turned around.

A small rock face with an old cable had to be negotiated, and past that the "trail" was pretty straightforward.  A small amount of hacking here and there was needed to create a swath but nothing was entirely overgrown.  We encountered a cool looking rock feature that resembled a ten-foot high tombstone.  From there some minor climbing was involved, but nothing overly strenuous.  Downclimbing was the norm, and the rocks were brittle in spots, but keeping a low center of gravity on the downclimbs and constantly determining our next step was key.

Along the way were a few old black cables that were either broken or just too old to rely on.  A couple of those black cables were also anchored and hanging off of ridiculous looking portions of the ridge that really had no merit.  So we pretty much made forward progress by ignoring the cables, keeping our pace slow.

The ridge narrowed considerably in spots.  Comparable to other dangerous ridge trails, the drops were modest but still had us on alert.  One wrong move and we would have got stabbed by the surrounding vegetation, cracked our heads open, broke our bones, or all of the above.

Our first major obstacle was a large notch in the ridge.  Debating on a contour, we decided that dropping to the left side of the ridge with the aid of Chase's rope was the best way to go.  Perfectly situated directly above what we intended to drop down from was a small hole in the ridge.  From there it was roughly a twenty-foot drop to a narrow strip of solid ground surrounded by vegetation.  The hole was our anchor point. We would loop the rope around the hole and make our way down slowly with whatever foot holds we could find.  Pete, of course, elected to go first.  Second was Chase, third Chenay, then Duc, then Rosie, then Laredo and Ryan.  When it was my turn I realized that getting down would require putting all faith into the rope.  Foot placement was tricky, but the rock was surprisingly sturdy.  About 3/4 of the way down, my arms began to cease, and I found myself struggling to get down the last eight feet or so to solid ground.  I took a quick rest to regain my strength, and finally made it down to where Ryan was.

With the first large notch behind us, we moved on.  I spotted another one of those old black cables, this time hanging off the right side of the ridge.  It looked as though it lead to a contour trail that would bypass what we would encounter next.

A bit of uphill climbing led us to the top of another large notch.  This time, the drop wasn't so forgiving.  One slip to the left and you'd get some airtime before hitting something.  At the top of the notch was an old white rope and a very useful O-ring.  However, the rope and O-ring were attached to a weak shrub that would definitely not bear the full brunt of someone's weight.  Using rope on the downclimb would require gentle pulling and extreme caution to not rip out the shrub from its roots.  Pete took out some webbing and looped it around the O-ring.  Again, in the same order, we descended one by one.  The downclimb we had to negotiate was similar in size to the previous notch we successfully passed, but there were more footholds and ledges to boost our confidence on the way down.  But like the last notch, the remaining eight feet or so was devoid of footholds.  Pete helped us down the last several feet, his hands acting as ledges.  He put both hands on the rock face, had us step on his hands, and he'd instruct us to slowly move downward all while cradling our feet in his hands.  That's one technique I've never used while downclimbing, and it was a useful one at that.

With the second notch behind us, we headed further.  A smaller notch in the ridge had to be negotiated, but no rope was needed.  A short uphill climb led to the top of broad crag with a view to die for.  We rested a bit and ate lunch, then headed steeply downhill to the remainder of what we could see was the saner portion of the ridge.  We followed an obvious swath to the last spur ridge that would make its steep descent to Kamehameha Highway.  We were back at our cars at 3:30pm.

My friend Scott Fisher successfully completed the same route solo one week after we did it.  He confirmed that the old black cable that was dangling off the right side of the ridge after the first notch did actually lead to a contour trail, avoiding the second notch altogether.  That's good to know.  I'll be sure to use that contour the next time I do the hike.  Piei Makai is definitely worthy of a rehike. 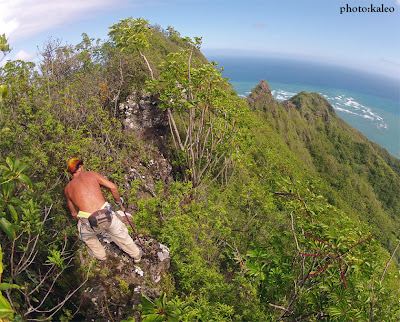 Laredo on the ridge. 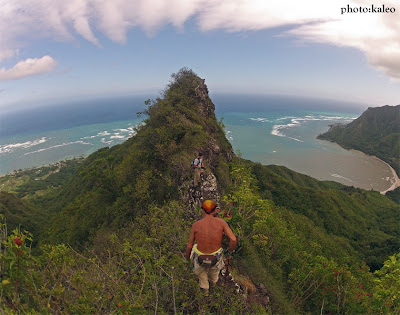 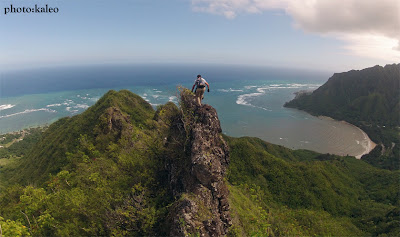 Pete on one of the narrow sections along the ridge. 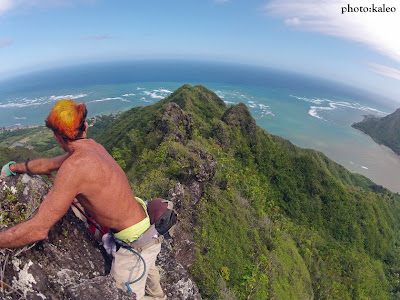 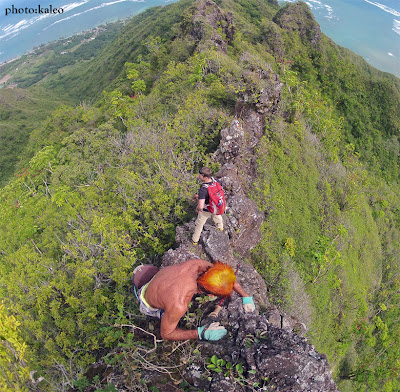 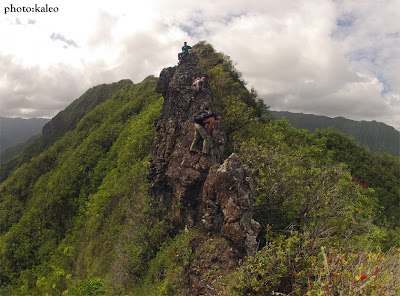 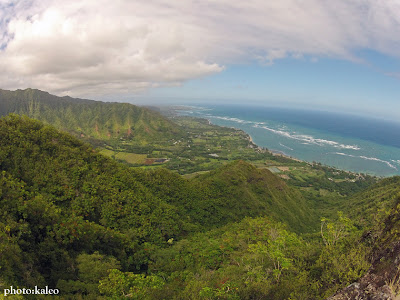 Looking down the coast from Punalu'u to Kahuku. 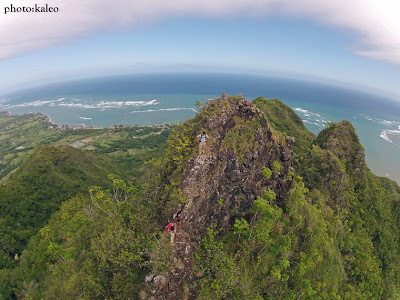 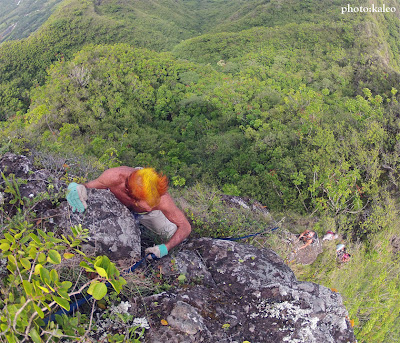 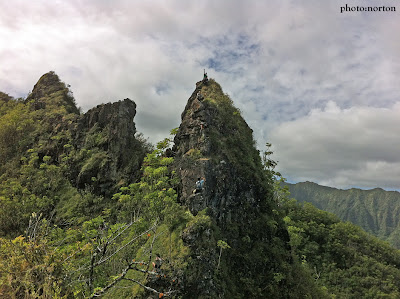 Looking back at the 2nd notch.  (photo: C. Norton) 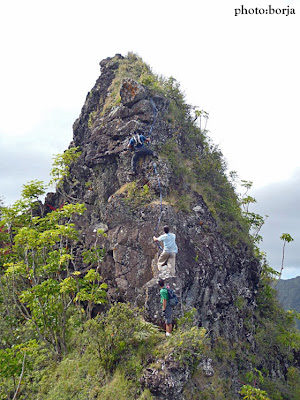 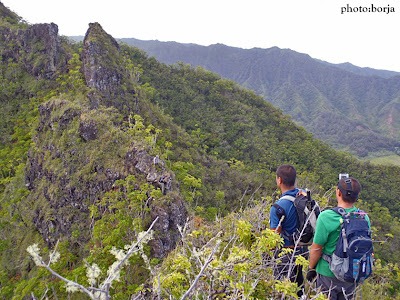 The hardest part behind us.  (photo: C. Borja) 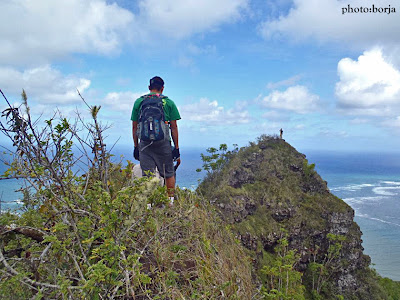 Ryan on the ridge.  Chase in the distance on the broad crag.  (photo: C. Borja) 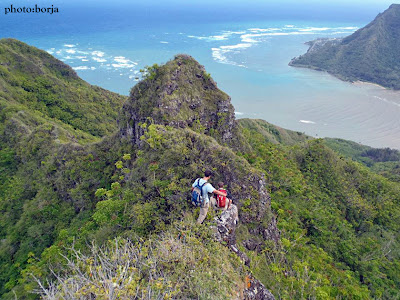 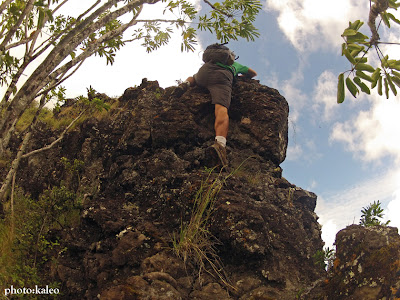 Ryan, downclimbing one of the smaller notches. 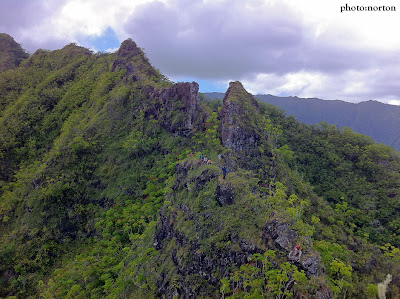 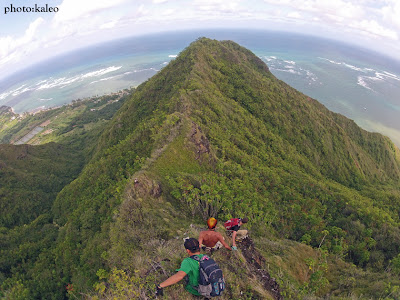 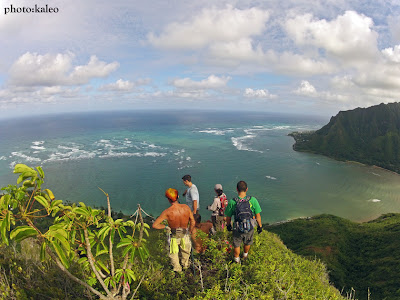 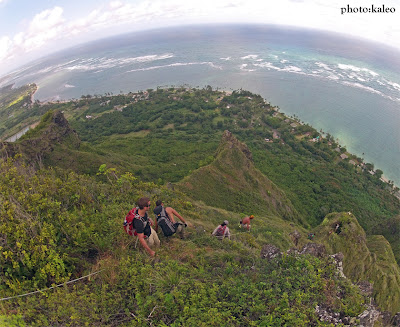 Heading down the makai-most spur ridge to Kamehameha Highway. 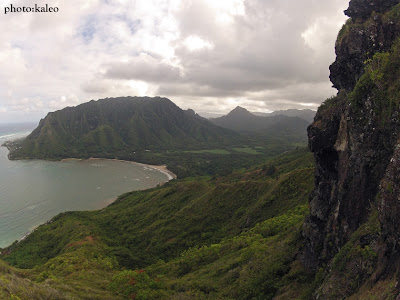