Daniel said it best before the hike we did on Friday: “The name of that trail sounds shitty.” Kevin and I thought about the name, too, but if the trail is listed on the Hawaiian Trail and Mountain Club’s website, there must be something cool about it.

The trail in question was the Waimalu Ditch Trail. When I thought of the word “ditch,” I imagined a concrete canal nestled in some valley filled with starving mosquitoes and the foul stench of stagnant water. But I always envision a trail to be the way I think it turns out, and I’m always way off. The Waimalu Ditch Trail actually turned out to be a fun little loop hike; it was so fun, in fact, that I want to go back and explore the valley a little more.

The Waimalu Ditch trailhead is easy to find. From Moanalua Road (the same road that heads to Pearlridge Shopping Center), turn mauka (mountain) on Kaonohi Street, and follow the street all the way to the top until you reach Onikiniki Place. Just before the gated community, park somewhere along Onikiniki. The trail begins on the left side of the gate.

At the very start of the trail, a small plaque can be seen fixated on a tree. The plaque is posted for lost Australian hiker named John Parsons; he was lost on the trail in September 2008. His body/remains have yet to found.

Past the plaque is a very well-defined trail. The trail immediately splits. Stay to the left. A descent will resume on what veteran HTMC hikers call The Dogshit Trail. What a brilliant name! There was dogshit everywhere! Our eyes were keen to hop and skip where ever it was needed.

The trail contours comfortably for almost an hour. It even heads makai (seaward) for a few minutes to edge around Waimalu Middle Ridge. (*A critical junction to remember is where the first sight of uluhe ferns starts. Walk a ways, passing a wall of uluhe on your right, until it tapers to a grassy area. Up ahead the trail makes an obvious and gradual descent. While looking toward the Ko’olau summit, turn in the direction of four-o’clock. A faint, grassy trail will manifest itself, and ribbons will soon come into view. Remember this junction to make the hike a loop; the aforementioned trail climbs steeply to Waimalu Middle Ridge and heads back to the start of the hike.)

We proceeded straight to our first sight of the stream. It was flowing quite nicely, and the water was extremely clear. We crossed the stream a number of times, passing some nice swimming holes along the way. We also encountered a group of hunters that caught a nice size boar.

At a certain point we reached a tree marked with three ribbons indicating the end of the trail. Further progress was possible, but after asking the hunters how far the trail went on, they told us that it goes on for another ten minutes and just closes up. So we turned around and headed back toward the junction that heads up to Waimalu Middle Ridge.

The climb up to gain the crest of the middle ridge reminded me of the hike up to “Three Poles” in Waianae Valley: steep, tiring, and not suited for a novice hiker. After twenty minutes of ascending, we finally reached the crest of Waimalu Middle Ridge. Turning left can bring one all the way to the Ko’olau summit; turning right, which is what we did, brings one back to the trailhead.

The trail along the ridge was choked with uluhe. Scraping and bleeding on our legs followed suit, and we soon reached a junction that took us extremely steep down the left side of the ridge. As far as I’m concerned, there was virtually no trail. All we could follow were ribbons. After falling and getting dirty, we finally reach the bottom and followed an obvious path back to The Dogshit Trail.

The populous area of Waimalu, Pearl City, and Aiea is a little discouraging. I never thought that above these cities was a lush area full of valleys and streams. From the trail looking toward the Ko’olau summit, there are three ridges: one to the left, one in the middle, and one to the right; all of which I’m pretty sure can be hiked all the way to the summit. I’ll have to check out these ridge options sometime in the future. The trail took me, Kevin, and Daniel a little over five hours to complete, and it was a hell of a workout. We descended a ridge, contoured a ridge, climbed over it, and then climbed back up a ridge. Nonetheless, it is a beautiful trail, and it is definitely one I wouldn’t mind doing again. 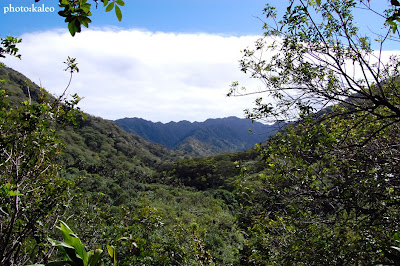 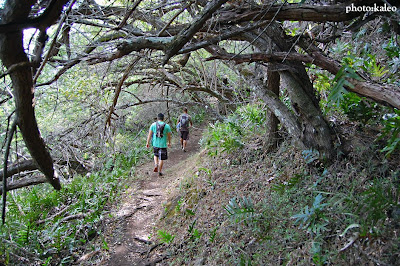 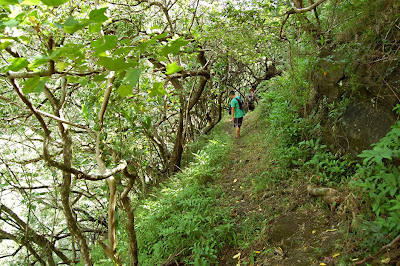 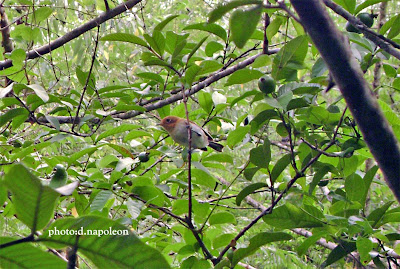 Anyone know what kind of bird this is? (photo: D. Napoleon) 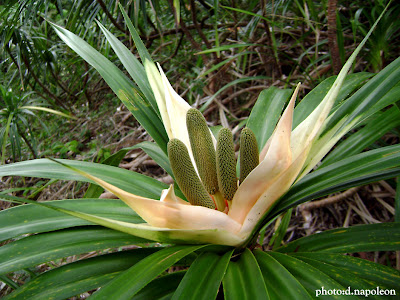 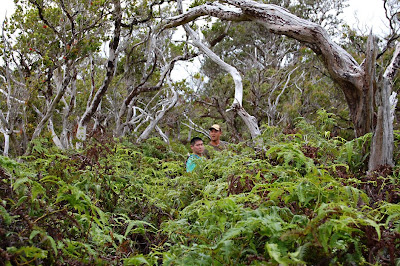 Peaking through the uluhe on Waimalu Middle Ridge. 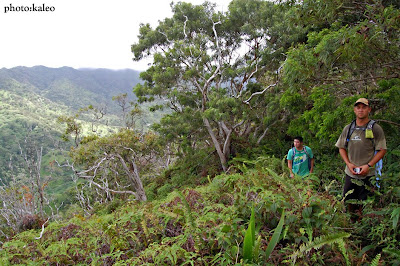 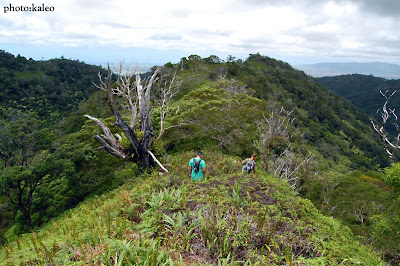 Lots of uluhe to push through on top of the ridge. 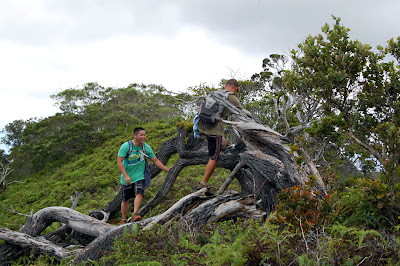 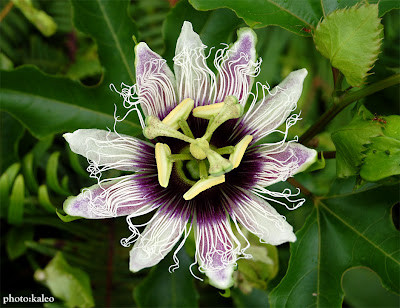 Anyone know what kind of flower this is?


Pools along the stream: 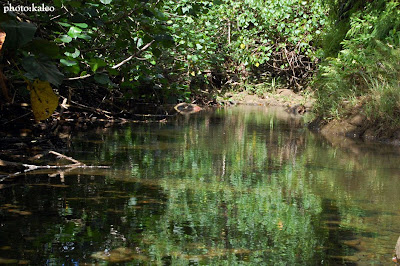 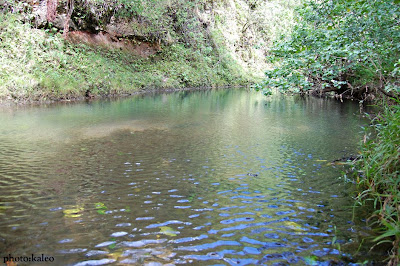 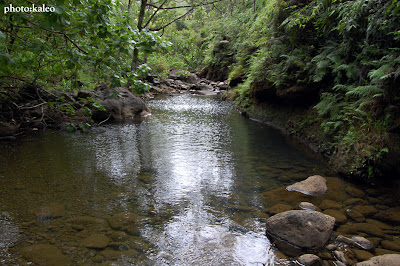 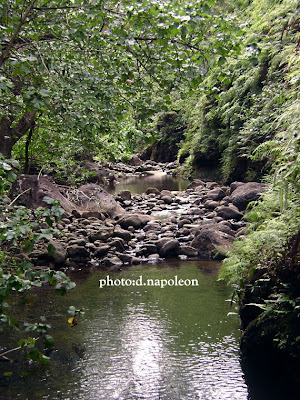 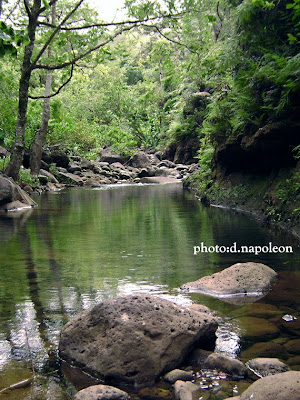 your blog makes me homesick. i'm not going to look at it anymore. hehe...jk. the bird's an 'elepaio (endemic species) and the flower's a liliko'i blossom (invasive → step on it). wish i coulda been there! k-bye captain!

The flower is Lilikoi, passion fruit.

Aloha,Love the information that you post on your site. Have been researching, locating and trying to link trails listed in the OAHU TRAIL INDEX site using Stuart Ball's book for a basic guide using his 50 "open" hikes and 37 closed hikes to get a head start on the list and a google search to help fill in the gaps. In reading your post on the Waimalu Ditch Trail I believe that it is following the old McCandless ditch for some of the trail. My topo maps don't show the trail going all the way up to the KST but I am sure that the ridge will get you there. The other trails/ridges that you mentioned looked like they could go to the KST would be the Aiea Loop/Ridge trail to the E/SE and the Waimano Ridge Trail to the N/NW. Keep up the good work! Mike

Another great write up, would love your review of the trail (and photos): https://lookintohawaii.com/hawaii/44748/waimalu-ditch-trail-hike-mccandless-activities-oahu-aiea-hi