Writing a long, drawn out description of the hike I did on Sunday will do no justice; you have to do the hike yourself to appreciate the lofty views and treacherous sections that is the Haiku Stairs -- or most commonly known as "The Stairway to Heaven." Think of it as a massive roller coaster track: the only thing is that the track is lain out on a narrow and extremely steep ridge that you're walking on. The Haiku Stairs has a lot of history surrounding it's 66 years of existence. Check out the following link for an in depth look at the stairs: http://davewjessup.smugmug.com/.

Seven of us accomplished the hike on Sunday: Daniel Napoleon, Anthony Czumalowski, Allan Soliven, Chris Prado, Ian Diaz, Shadow-Kamaka'u'ole Koko, and myself. Ian and Chris had done the stairs before, but I had proposed a variation of the hike. I had never done the stairs before, so I was very excited to say the least. My plan was to hike up the stairs and descend into Moanalua Valley via Moanalua's Middle Ridge. The middle ridge is famous for its narrow sections and towering views overlooking the ridges to the north; the ridge is also one of the routes for the Pu'u Keahi a Kahoe loop, a loop that I completed in June 2008.

Because there are guards that patrol the Haiku Stairs trailhead from 6am to the afternoon, we got off to a 5am start. It was so early in fact that we hiked in the dark with flashlights. There are multiple ways to get to the stairs, and the one Chris showed us seemed to be the safest way without getting caught. The street that we parked on was Kuneki Place. There is a concrete canal that we had to follow in order to get to a discernible trail. Google directions to Kuneki Place. It's easy to find.

It took us about an hour-and-a-half to reach the top of the stairs. From there, we pushed off in misty clouds and shin deep mud along the narrow Ko'olau summit toward Pu'u Keahi a Kahoe (elev. ~2,800 ft.). The view going down the middle ridge was spectacular. It is definitely one of the most beautiful southern Ko'olau ridges. The initial part of the ridge is so high that it dwarfs all the ridges to the north.

We completed the hike in exactly five-and-a-half hours. Daniel had the idea of doing the trail again with a different route: we would climb down (turn right at the stairs top out) to Kulana'ahane and head out on that route. I've acutally done research of that route, and from what I've found, no one has any evidence of doing it. Probably because the ridge looks mental, and Daniel is...well...mental. With that said, though, I'd definitely do this hike again. The views are one of the best in the island. I'm not posting much pictures, but there is video of the hike that should suffice. 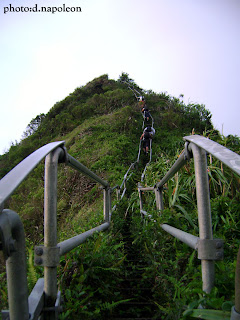 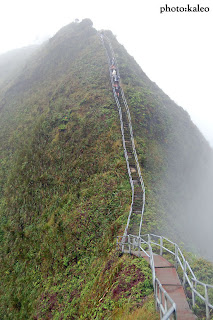 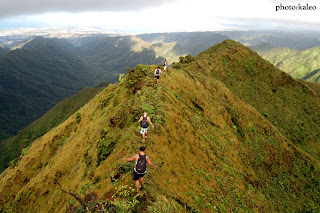 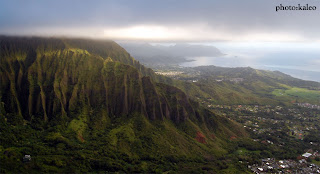 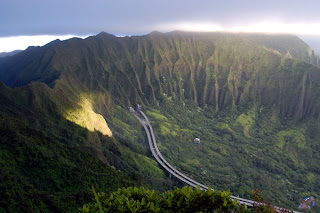 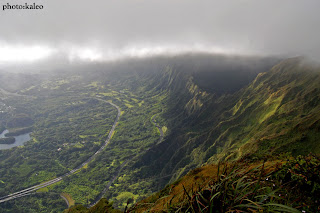 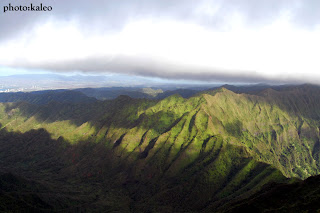 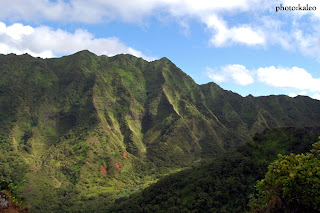 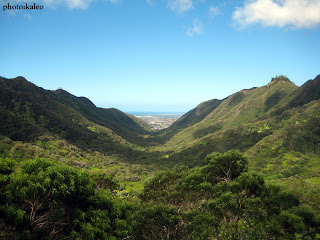 Why do guards patrol the stairs? Is it on private land?

The trail isn't really maintained so it isn't very safe. There is a guard at the main gate to stop people from going up.

The guards are there to stop people because the access route to the trail is on bishop estates property. I don't think it has anything to do with safety.

Hey, lemme know when you plan on doing the other route. I'd love to do that hike again.

Kaleo,
Thanks for the bit on Kuneki Place. I tried this route last weekend and I definitely think it is the best entrance. This hike is incredible, and I was so stoked to have finally made it to the top on my third attempt.
Mahalo,
Leslie

Thanks for posting this. I went with the Leslie above. It was amazing.

I attempted the moanalua saddle from Haiku stairs. It's only been done twice in the last 40 years. didn't know that. The ridges into the saddle was nothing but loose soil and nothing to hold on to. Ended up climbing down to the top of moanalua falls and then down into the valley. That itself was trecherous. Do not attempt either the ridge or the descent into the falls without climbing gear.

i've heard a lot and i've been really itching to do this hike..if you can provide us the detail direction of getting to the residential place. I've Google it but it just didn't click on me..please...Thank you..

Does the Pu'u Keahi a Kahoe loop end up in the same area as you started for Haiku Stairs?

yes. at the top of the stairs, if you bear left along the ko'olau summit trail, you'll eventually reach pu'u keahi a kahoe...

I always thought that Pu'u Keahi a Kahoe was the top of Haiku stairs. The name of the middle ridge summit is Maunakapu, and I don't remember any other prominent peaks between there and stairway. I've traversed this four times.

oops. my bad. you're right. maunakapu is the peak of moanalua middle ridge...

I LOVE your site!!!!! I'm not going to lie when I say some of these pictures look scary as hell!!! Like my stomach drops looking at them :) I am excited to try some of the non stomach dropping trails though!!! We just got to the island in may of this year, so I'm still on the look out for trails. We've done diamond head, koko head, and sacred falls so far, and sacred falls was by far my favorite! I love that area of the island! Definitely looking forward to trying the stairs at some point! Again, I love this site! I think I'll make an account :)

I'm going to oahu in August and I am very interested in climbing haiku stairs or the sacred falls trail. So are they both illegal to climb? I have been reading up on them and they seem very intriguing. Do you simply turn around once u get to the top of the stairs or is there a staircase leading down as well? I would like to do one of these hikes but would prefer avoiding the authorities at all costs. Please whoever reads this, leave me a comment with some helpful information. It will be much appreciated.

the stairs and sacred falls are both closed to the public. my advice is to start early for both. the guards at the stairs get there by 6am or sometimes earlier. so you'll have to start in the dark. as for sacred falls, i've never done it, but i know for a fact that a security guard roams the area to keep people out.

the route up haiku stairs is usually done to the top and back done the same way you came up. you can of course do what we did: go beyond the top of point of the stairs along the ko'olau summit and reach a junction that goes down moanalua middle ridge. leave a car at the start and end point. hope that helps...

This hike looks great! Once you get to the top of Stair Way to Heaven do you vear left or right? Also where did you park your car at the end of middle ridge? Thank you!

turn left at the top of the stairs. i parked a car at the entrance of moanalua valley park...

kaleo, thank you for responding. i was the anonymous above. So me and my buddies are planning to climb the stairs when we come out this summer. So once we reach the top of the stairs you said veer left to go down the middle ridge? Is it easily discernable? Also what would u rate the difficulty of this hike? We are not professionals by any means but have done lots of hiking and climbing. You say to park a car @ moanalua valley park? Also once we get to the top of stairs and on middle ridge is their only one way down? Do you need to get on any other trails or anything or will the ridge that you get at the top of stairs take you all the way down to the valley park. Thank you so much for taking the time to help me out. You seem very well informed and we also share a love for the outdoors. Oahu is the most bost beautiful place i have ever seen. I think we got it mostly figured out...jus have the questions about the climb down once we reach the top. Thanks again. Hope to hear from you.

is the middle ridge the first ridge you come upon after reaching the top of the stairs?

once at the top of the stairs, hop fence and follow the summit trail to the left until you reach the first ribboned junction and a trail leading off the summit ridge to the right (townbound). heading down that junction is moanalua middle ridge...

Hey man, I'm leaving the Island here very shortly and i wanna take this girl up this because she wants to do it. I was curious, can you please email me at Loganhill3@gmail.com and help me find the good spots and where to park and such. You would be doing me the biggest favor man.

If anyone is planning to do the moanalua middle ridge to haiku stairs please let me know on here..I would love to try it out with you folks..thanks.

doing it today. starting in moanalua then down the stairs. love the video. Not sure what i would do without this site and unrealhawaii.com Thank you.

Every musician wants to do something which will hold up for a long time, and I guess we did it with stairway to heaven. See the link below for more info.