A little over a month ago, Dave Chatsuthiphan, Lei Yamasaki, Keoni Napoleon, Laredo Muredo, Patrick Rorie, and I took advantage of the recent trail clearing of Waiau Ridge.  Not wanting to do it as an "up-and-down" excursion, I frothed at the idea of going up Waiau, turning southeast along the Ko'olau summit ridge, and coming down Waimalu Middle Ridge.  The idea was an ambitious one, and intimidating, to say the least.  To put it into perspective the route would require two vehicles at two separate trailheads and an able crew to cover about fourteen miles in twelve hours, with the main attraction being the large, infamous, grassy meadow and summit of Waimalu Middle.

The plan to do Waiau to Waimalu started several weeks prior to actually completing the route.  I never like to "go blind" when attempting long, arduous day hikes, so I tend to always do my homework beforehand.  Part of that homework was to find the base of Waimalu Middle Ridge in Waimalu Valley, which Ryan Chang and I successfully did a couple weeks prior.  Finding the base of the ridge would give us a good idea of our exit route, which would be the our last leg on the Waiau to Waimalu adventure.

From the Waimalu Ditch trailhead on Onikiniki Place, the approach to the base of Waimalu Middle is long, taking around two hours, crossing a stream ten times along the way.  From reports I had read in the late 90's and early turn of the century, Waimalu Middle did get its fair share of traffic, though it went into disuse for many years thereafter and is now just another overgrown ridge route to the Ko'olau summit.  That recently changed when August Smith and Pete Clines successfully bushwhacked their way up the ridge on May 13th, 2012, leaving behind a greatly appreciated swath that would be helpful for our planned descent down the ridge.  Their report explained of a jaw-dropping area at the summit, which coincides with previous reports of the summit being "outer worldly" and "mythical."  My mouth was watering.

Neighboring Waimalu Middle to the northwest is Waiau Ridge, a six-mile ungraded ridge to the Ko'olau summit that is known for its heavy overgrowth.  The upper portion of Waiau Ridge is notorious for being so overgrown that not many people used to reach the top from the bottom.  However, the reliable and dedicated trail clearing crew of the Hawaiian Trail and Mountain Club recently made the entire ridge passable to the summit.

With the long summer days upon us, Waiau cleared to the summit, and a relatively noticeable swath on Waimalu Middle, it was time to give Waiau to Waimalu a go.  Having exchanged emails with Pete Clines, I was excited to hear that he, August Smith, and Chase Norton were planning to hike on the same day we were doing Waiau to Waimalu.  Their plan, though, was to go up Aiea Ridge -- another ridge further southeast of Waimalu Middle -- to the Ko'olau summit, turn northwest and then come down Waimalu Middle.  Our plan was for our two groups to rendezvous at the summit of Waimalu Middle and descend it into Waimalu Valley.

Our group arrived at the Ka'ahumanu Street trailhead for Waiau Ridge at around 6am; Pete's group started at the Aiea Ridge trailhead around 7am.  We pushed off at 6:30am, the weather a bit discouraging initially, with dark, heavy clouds sitting atop the Ko'olau summit and a bit of rain falling while making our way along the dirt road to the actual start of trail.  I had phoned Laredo to see if he and Patrick were on their way.  They would start later and catch up with us.

About an hour in, the clouds cleared from the summit, the sun shone, and the winds blew constant and cool.  The weather conditions turned out to be perfect.  We reached an obvious junction to the Halapepe Nui trail coming in on the right leading to the top of Hapaki Street.  Our misjudgment led us a little ways down the trail junction, and we later retraced our steps back to the take the correct trail that stayed on Waiau Ridge.

About two hours lapsed and we were at the "Big Dip."  The Big Dip is a large saddle in the ridge that descends about 200 feet and regains the same elevation that is lost.  From this prominent landmark, the summit was a little under two hours away.

Past the Big Dip, the trail offered awesome views of the surrounding ridges and the Waianae Mountain Range.  At a certain point, Patrick and Laredo caught up with us and passed us, eventually reaching the summit first!  They had started at 7:50am, and reached the summit at 11:15am.  How those two hike that fast is beyond me.

At 11:30am, Daniel, Lei, David, and I reached the summit as well, snapping photos of the breathtaking view of Waihe'e Valley and the windward coastline.  After a quick snack break, we headed southeast along the summit ridge at 11:45am toward the summit of Waimalu Middle.

Around 12:20pm we finally reached the summit of Waimalu meadow.  I've seen it in pictures, and I've heard stories, but when you see it and experience it in person, nothing else compares.  The meadow is large, grassy, and ridiculously beautiful, the wind howling and the clouds soaring at high speed over the summit ridge.  A short, steep climb out of the meadow to the actual summit of Waimalu Middle is where we met Pete, August, and Chase for lunch.  The top is flat, gusty, and the views are breathtaking.

After about an hour at the summit, August led the way down Waimalu Middle.  The now socked in conditions made it a tad difficult to find the actual ridge to descend.  Even with the white out conditions, the experience was out of this world!  The beginning of the Waimalu Middle descent is on a ridge devoid of vegetation over shin high, making for a memorable walk on a grassy, exposed ridge.  Further down the ridge we were out of the clouds and could see our long route down into Waimalu Valley.  Again, the views were priceless.  About half way down the ridge is where we hit some overgrowth.  Some sections would open up, others would close in, but it was very passable, and the route very obvious.  Although, I kept thinking about how August and Pete must've felt ascending the ridge a month prior.  A definite "hell no" in my book.

We reached the bottom of Waimalu Valley in good time, about four hours from the Ko'olau summit.  All that had to be completed was the ten stream crossings, and the climb out of the valley to Onikiniki Place.  Easier said than done: another two hours of hiking.  After the stream crossings, the trail turns into a long contour all the way to the Onikiniki Place subdivision.  I led the way, keeping a fast pace, not saying one word, delirious from staring at ever step I took, feeling like a robot, my stride just naturally paced by remembering the sound of ever step hitting the trail below me.  We had been hiking for over ten hours, and I was ready to get the hell out.  To sum up the last leg of the hike: boring and monotonous.

At 6:30pm, we finally made it out into civilation.  We shook hands with Pete, August, and Chase, parted ways, then jumped in my car, and headed back to the Waiau trailhead that we started at twelve hours earlier.  The hike was officially a success.  The weather couldn't have been better, and as for the company, it made it that much more memorable.  The highlight and main destination, of course, was the meadow atop Waimalu.  It is definitely a spot that is "out of the way" to get to.  It takes a lot of effort as well, no matter where you plan to start your hike to get to it.  And that's what makes it that much more amazing: the remoteness, the seclusion, and the motivation to get you there.  That is what makes it so special.  From the hustle and bustle of Pearl Ridge Shopping Center, to the traffic on Moanalua Freeway, few know that miles above all that chaos, lies a surreal, quiet place in the mountains that is lonely and untouched, that few have ever been to or seen first-hand.  It's just nature in its purest form.  Oahu in its true Hawaiian-ness.  Without a doubt, the Waimalu meadow is up there as one of the must-see hiking destinations in Hawaii. 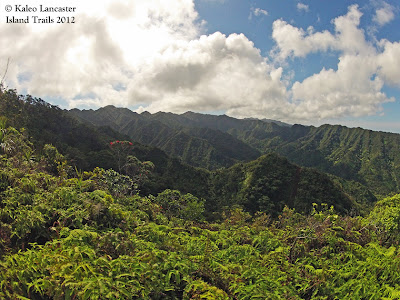 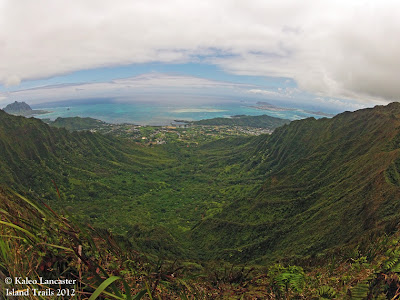 Summit view at the top of Waiau Ridge overlooking Waihe'e Valley and the windward coastline. 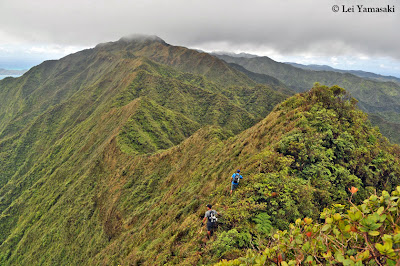 Heading to the Waimalu Middle meadow and summit along the Ko'olau summit ridge.  (photo: L. Yamasaki) 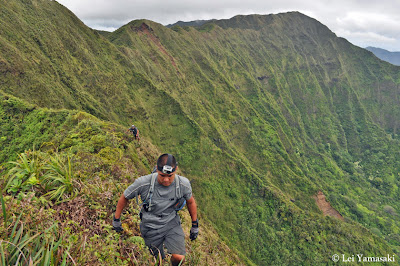 Pu'u Eleao in the top right corner of the photo.  (photo: L. Yamasaki) 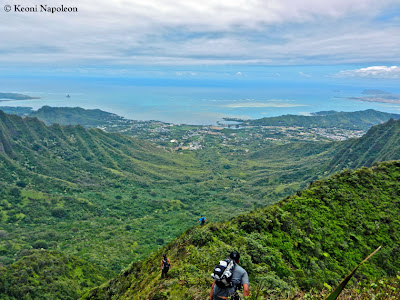 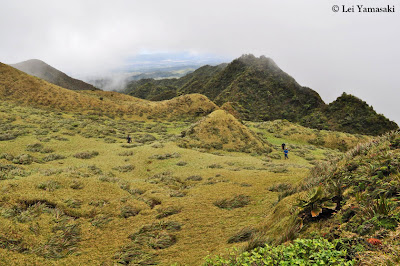 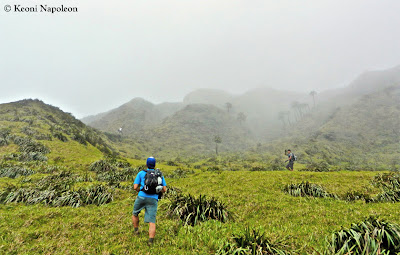 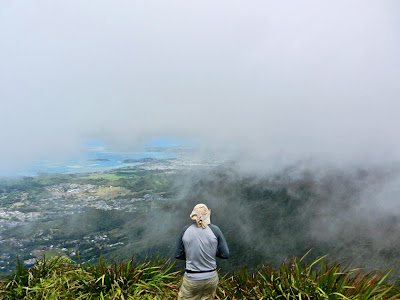 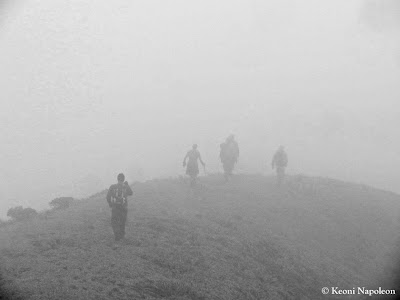 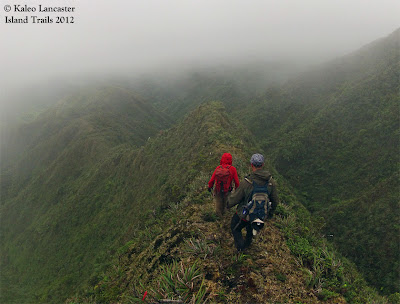 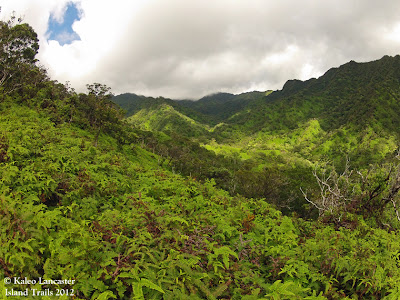 Looking back at Waimalu Valley along the lower portion of Waimalu Middle Ridge.

Is that Laredo without his shirt on?

Hey Kaleo is it possible to go straight up the waimalu middle ridge trail to get to the meadow? I live right on that street and was thinking of trying to reach the meadow. Your post is very inspirational. Thanks for any info.