The Hawaiian Trail Mountain Club website is very helpful. The club's website has a list of scheduled trail clearings at various trails around the island that are in need of maintenance. Around the middle of October 2008, the club scheduled a trail clearing on Kulepeamoa Ridge in Niu Valley. From what I've read on the internet, Kulepeamoa is a difficult and dangerous trail that consists of steep climbs, narrow sections, and vertical drop-offs: my kind of hike.

The coincidence of Halloween landing on a Friday weeded out the people who hike with me regularly. I, too, had my fair share of drinks the night before, and I woke up with a slight hangover in the morning, but after a few cups of water, I felt better and picked up my friend John to accompany me on what the Hawaiian Trail Mountain Club calls a "lung-busting" hike.

The trail begins with a an easy walk through Niu Valley, paralleling a dry stream bed. After about a half-mile, the trail turns right and uphill until the Kulepeamoa ridgeline is gained. The rocky climb uphill was brutal. John and I topped out in a shady and breezy ironwood grove. We rested a bit and pushed on.

The ungraded trail was really nice. We passed groves of Sydney Blue Gum trees and ferns of all types. The uluhe fern sections were cleared out extremely well, too. A few hours into the hike we reached some dangerous spots. The ridge narrowed and became rocky. There was also a massive, vertical rope section with a huge drop on the right side of the ridge. Without the rope, the vertical section would have been a bitch to climb.

A couple more climbs and we finally reached the Ko'olau Summit. To the left we could see other hikers resting at the top of the Hawaii Loa Ridge trail. To the right was Pu'u O Kona. In front was Mount Olomana and the towns of Kailua, Lanikai, Waimanalo, and Kaneohe. After eating lunch, we headed back down. The trail took us a little over six hours, but it could be done faster; we took a lot of breaks along the way. 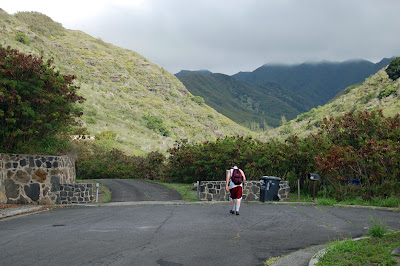 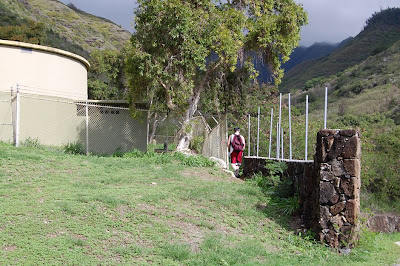 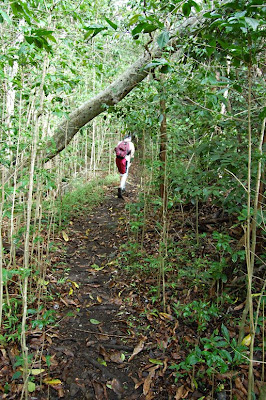 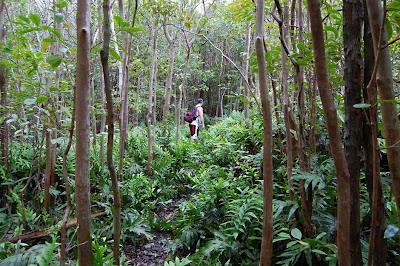 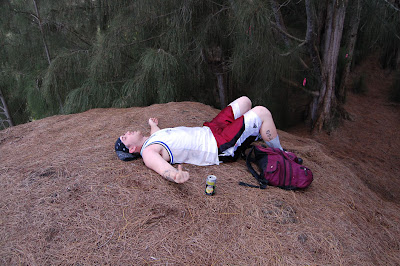 Here's how John felt after the first steep climb to gain the ridgeline. 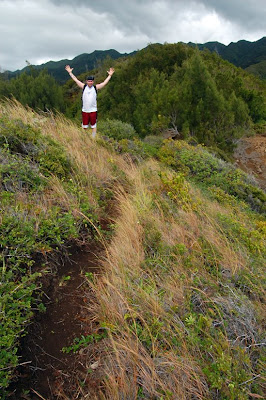 The ridge had a lot of nice, level sections after the first steep climb. 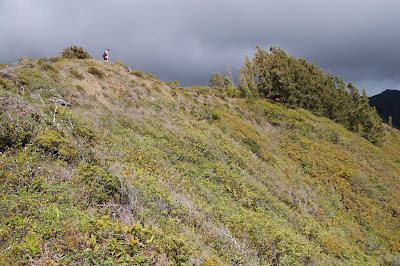 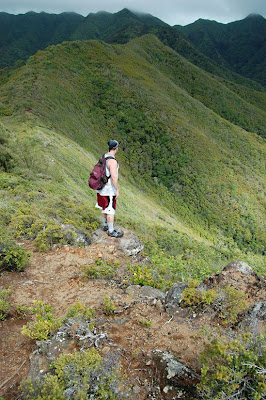 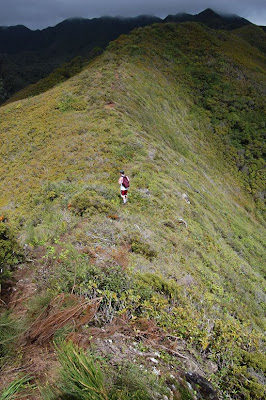 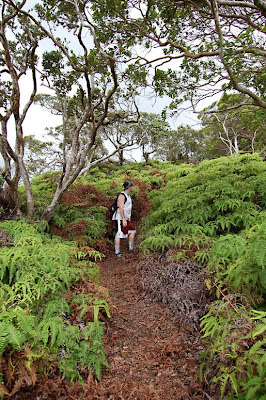 The scheduled trail clearing by the HTMC was a successful one.  Here the trail is wide and well-groomed.  Uluhe fern sections like this one usually choke the trail and make the ridge difficult to hike. 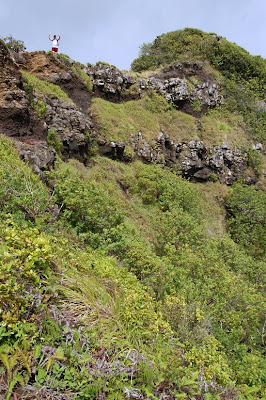 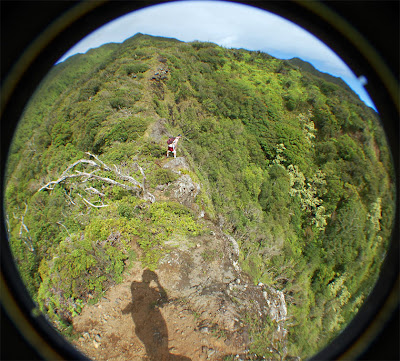 Here's a picture of John peeking over the edge of a huge drop on the right side of the ridge. 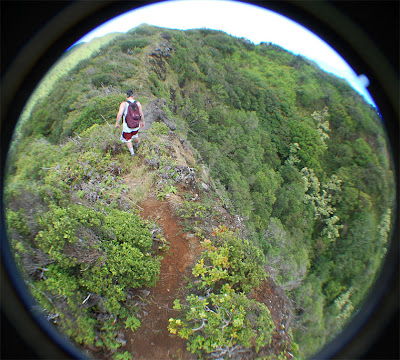 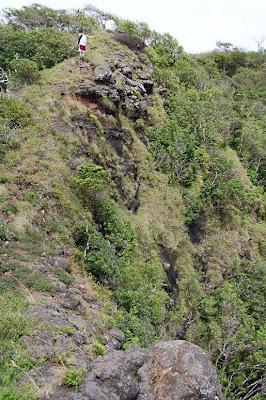 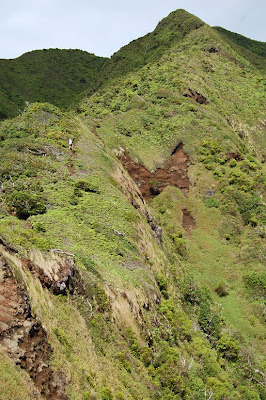 Steep climbing resumed as we neared the Ko'olau Summit. 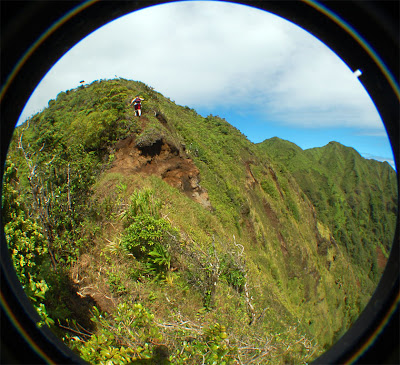 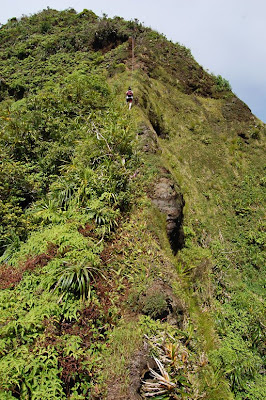 Massive rope section.  Notice the drop on the right side. 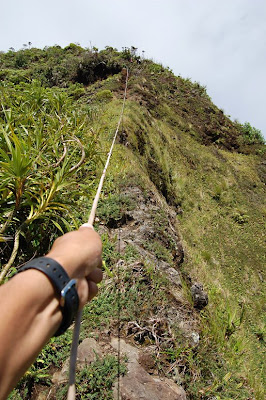 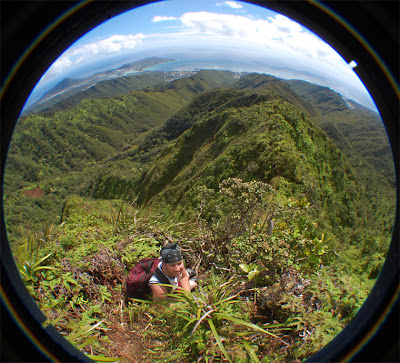 Looking back at the length of ridge we just hiked. 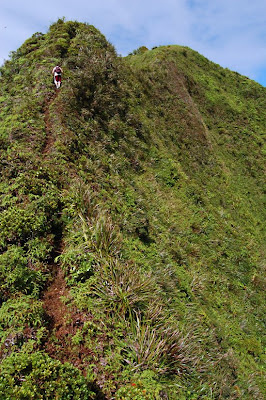 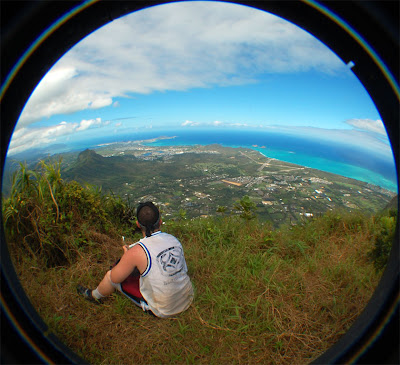 Grassy lookout at the summit. 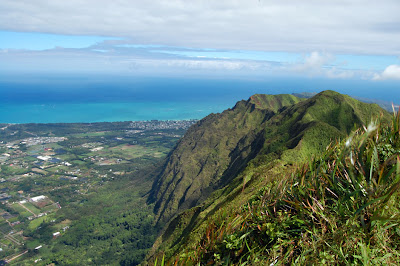 Here's the view to the right.  The peak in middle-right portion of the picture is Pu'u O Kona: a fun, yet dangerous loop hike that I did in June of 2008. 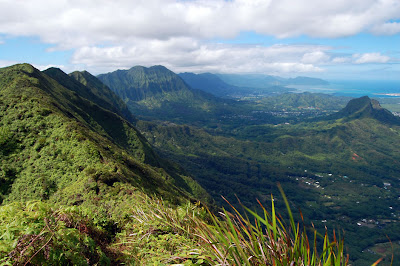 And here's an awesome view to the left.  I had originally planned to hike up Kulepeamoa and turn left to climb down Hawaii Loa Ridge, but we didn't have another car. 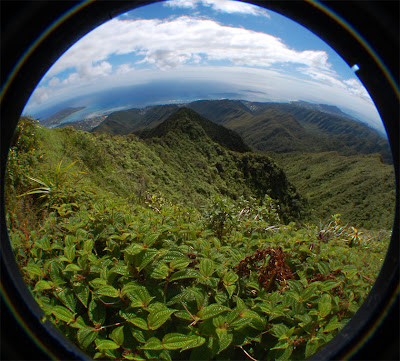