If you've hiked enough, you tend to examine mountain ridges from a distance and wonder if it's climbable or not. I usually do it behind the wheel, a bad habit I can't seem to shake. But the bad habit can sometimes be a ridge adventure in disguise. For quite some time now, one particular ridge has had me swerving and riding braille every time I've been on Kunia Road. It's a ridge that shoots straight to the top of Pu'u Hapapa, a 2,883 foot peak in the Waianae Mountain Range. Eyeballing the ridge from afar, straight on from the east, is a bit intimidating, but upon inspecting it from the north or south side, the ridge is definitely hikeable.

First off, access. The Pu'u Hapapa trailhead is on Schofield Barracks, an army base in Central Oahu. Come with up-to-date paperwork for your vehicle and some identification cards (license, passport, etc.) for everyone that is with you. You can, of course, get on base with no hassle if you know someone that is in the military. Once on base, follow the road mountainward to Kolekole Pass. You'll see another guard station. Just before the guard station is a dirt parking lot on the left. Park there. Straight ahead is the start of the trail to Hapapa. You'll know you're on the right path when you start ascending on wooden stairs. Pass a large boulder known as the "Sacrificial Rock." Then follow a dirt road all the way to a grassy meadow with an awesome over look of sheer cliffs and Lualualei Valley.

*Side note: I highly recommend getting on base during the weekend. Past experiences have proved that access to the trailhead on the weekdays are hampered by the military performing live fire exercises. WHEN THE LIVE FIRE EXERCISES ARE GOING ON, YOU CANNOT HIKE THE TRAILS NEAR KOLEKOLE PASS.

From the meadow, we moved away from Lualualei Valley, and beared left on a trail jutting into the forest. This is the beginning of the Honouliuli Contour Trail. It contours in and out of small gulches between the base and the summit of the mountain range.

There are two popular ascending routes to the top of Hapapa. I've done both. You can check those out here: 1st time to Hapapa and 2nd time to Hapapa. En route to Hapapa Direct, we passed the turnoffs to those ridges after about 15-20 minutes along the contour trail. After passing the second turnoff, we walked another 15 (+/-) minutes to get to a very inconspicuous turnoff on the right leading up the broad initial portion of Hapapa Direct. I marked the turnoff with one orange ribbon. Near the area of my orange ribbon there are a bunch of scattered white, shin high poles erected in the ground with pink ribbons tied to it. Don't know what those poles are for, but it serves as a good indicator for the start of the ridge.

Following the ridge up is where the "fun" began. We followed pig trails, lost pig trails, got tangled in vines, got pierced by trees with painful hooks, and got bit by mosquitoes. I marked our route up along several trees with my orange ribbon but ran out at a certain point. I also did some swooping with my machete but it didn't help much, so we just tolerated the onslaught for a good 10-15 minutes until the vegetation cleared and the ridge narrowed.

What surprised me once the vegetation cleared was an orange ribbon overhead affixed to a tree and a swath leading up the ridge. The ribbon seemed relatively new: no color fade, no dirt. More ribbons existed upridge, so we followed the ribbons until we hit a fifteen foot rock face. No rope, but the rock was climbable: tricky near the top because of the moss growth and slipperiness on top of the rock, but the rock was surprisingly firm and didn't break loose under our weight. Beyond this rock face the orange ribbons were no more, and the climbing started to get steeper. We also encountered more ribbons, only this time the ribbons were very old blue and white ones which were few and far between. Also, the swath became barely discernible.

We soon found ourselves contorting our bodies to get under vegetation, swinging on trees to progress further, and scrambling endlessly over grass and loose dirt as the ridge got even steeper. Several other rock faces had to be negotiated as well. A few sections even had webbing anchored securely to strong trees above us. The webbing was very weathered, but it held our weight perfectly on the worst spots.

As we neared the top, an obvious trail opened up thru the vegetation. I assume people who spot the Hapapa Direct junction at the summit take a top-down approach and turn around at a certain point when they don't like what they see. We topped out a couple minutes north of the Hapapa lunch spot, an exposed 10ft x 10ft dirt clearing with a wooden perimeter and an awesome view overlooking the the western, southern, central, and northern sides of Oahu. And the Ko'olau Mountain Range? Yeah, we could see that, too.

After a quick lunch we headed back down a steep spur ridge that eventually met up near the beginning of the Honouliuli Coutour Trail. Back in 2008 I had thought that this spur ridge was THE craziest ridge I've ever hiked. Three years and 82 hikes later, this trail really isn't that bad. There are two very large notches that look insane from the meadow, but it is very doable. Plus, in my opinion, the route down the spur ridge is one of the most beautiful descents on the island. The sheer cliffs along the backside of Hapapa leading vertically to Lualualei Valley are unlike anything I've seen on Oahu. It is a must-do ridge if you ever hike Hapapa.

Back at the meadow, we admired the views once more, took some photos, some video, and then headed back to our cars. Hiked about a total of four-and-half-hours (I think -- I can't remember the mileage either). We passed a lot of people along the way back to our car as well, even about a dozen children. I wonder if they did Hapapa Direct that day as well? :) 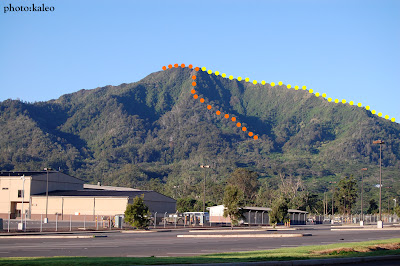 Orange route up.  Yellow route down.  The Honouliuli Trail is somewhere in there near the bottom of the first orange dot and leading off to the right. 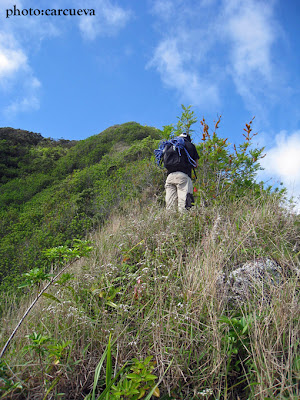 Nate taking a breather on Hapapa Direct.  (photo: A. Carcueva) 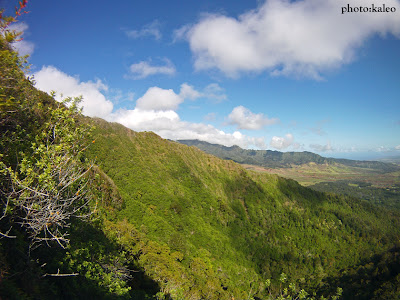 Nate figured out how to use the panorama app on his phone.  Here's the view looking northwest at the lunch spot atop Hapapa.  (photo: N. Rubio) 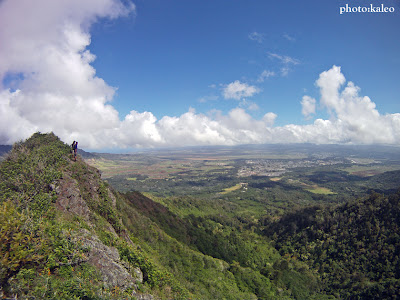 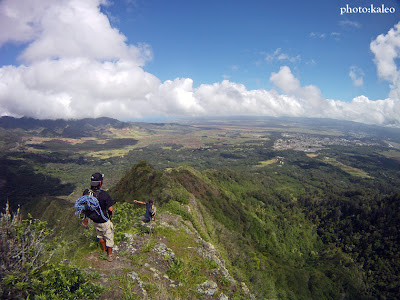 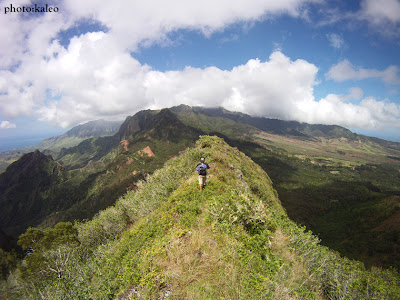 Nate on the spur ridge. 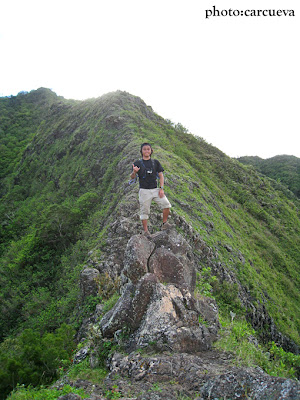 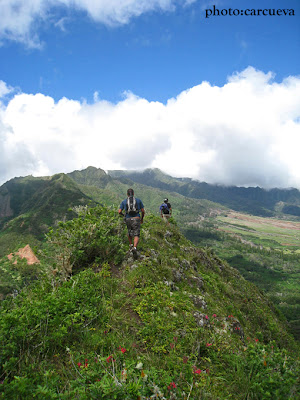 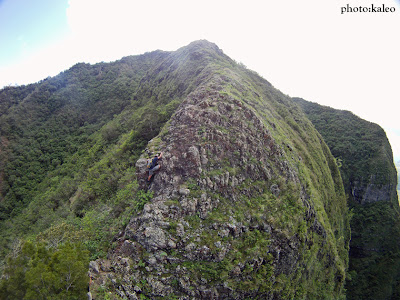 Albert, negotiating the first notch, the smallest of the two notches.

If you look closely you can see Nate and Albert on the left side of the panorama.  They are at the bottom of the 2nd notch.  Click on the picture for a larger view. 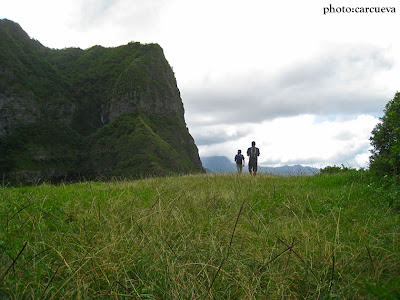 Back at the meadow.  (photo: A. Carcueva)

Kalo Falls. There's not much information about this waterfall on the net, so I decided to go out on a limb and see it for myself. What Lei, Ryan, Kelven, and I found, after hiking four-and-a-half-miles in a gulch stream, was a lonely 80-foot waterfall with a nice little pool at its base. The name Kalo Falls is derived from a small taro patch that grows on an embankment near the waterfall. Total hike time: six-and-a-half hours. Total mileage: a little under nine miles. Check out the pictures and video below. 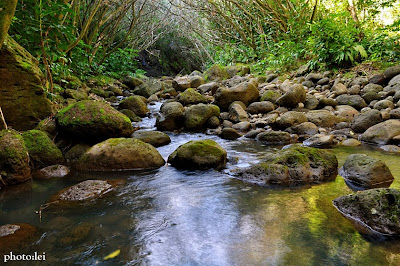 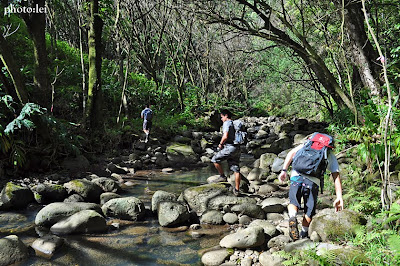 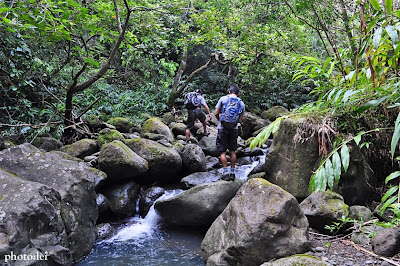 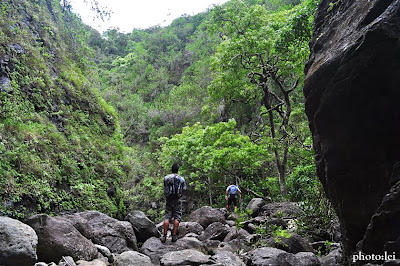 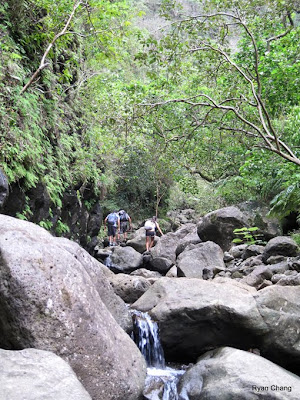 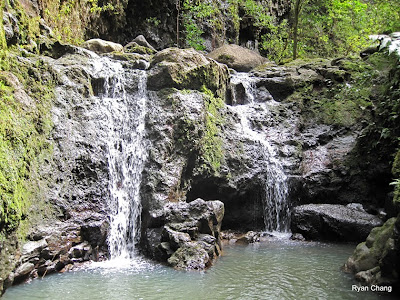 When we reached this waterfall, we took off our bags and had to swim in the pool and climb the waterfall to advance further.  From this point the taller waterfall is about 15 minutes away.  (photo: R. Chang) 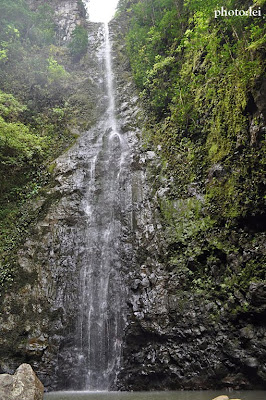 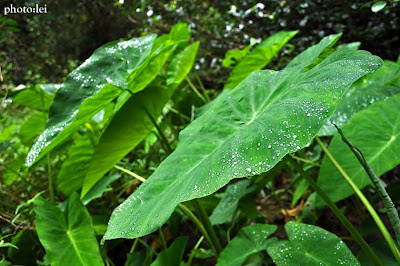 The taro patch growing near the waterfall.  (photo: L. Yamasaki) 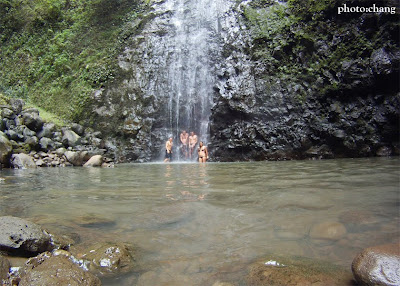 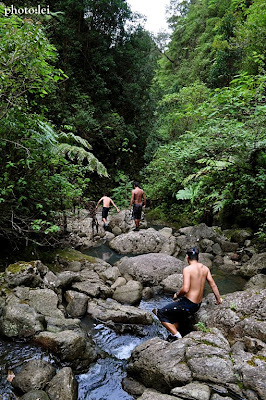 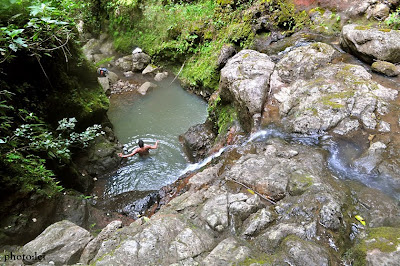 Did a short hike this past Thursday. I haven't done a weekday hike in...um...forever. My cousin was visiting from the mainland, so I decided to take her on a trail that's somewhat challenging for a first timer but very rewarding at the top. Plus, I had to work in the afternoon, so the first peak ascent of Olomana seemed to be a perfect choice. Good workout. Perfect views. All under three hours.

Check out the links below for my past hikes along the Olomana trail, complete with detailed write-ups, pictures, videos, and directions to the trailhead: 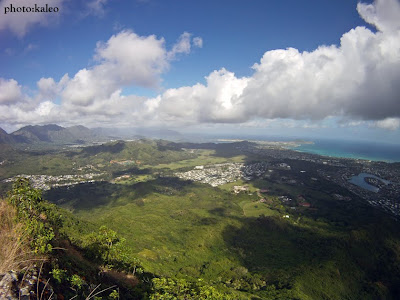