I had my sights set on connecting Malaekahana Ridge and Laie Ridge for well over a year. I don't know why it took me so long to do it, but I finally completed it recently. It's a beautiful twelve mile loop that reaches far into the remote and undeveloped section behind Laie Town. This particular loop hike was awesome because it included a short section along the Ko'olau Summit Trail (KST). It was a first for me, for I had never topped out along the Ko'olau summit in the Ko'olauloa district. The summit trail section was in good shape and well marked thanks to a crew of four that did some minor clearing on a backpack trek from Pupukea Heights to Waikane a few weeks prior. Although it was a bit overgrown at times and extremely muddy, the swath was very obvious as it contoured leisurely around the numerous hills of the Ko'olau summit ridge. An hour-and-a-half jaunt along the summit trail and we were at the Laie Ridge junction. The hike down Laie Ridge was a breeze compared to the hike up Malaekahana. Malaekahana is an ungraded ridge hike, where the trail follows the crest of the ridge, undulating all the way to the KST; Laie is graded, its trail contoured below the crest of the ridge, making for easy going on the hike up or down. The hike took us a total of nine hours to complete. 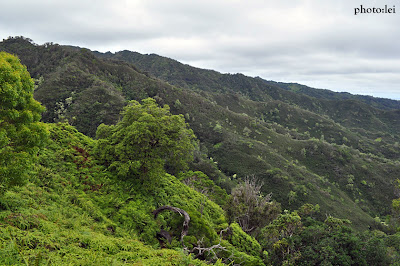 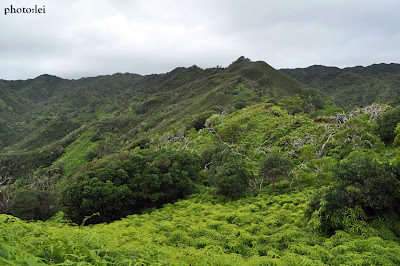 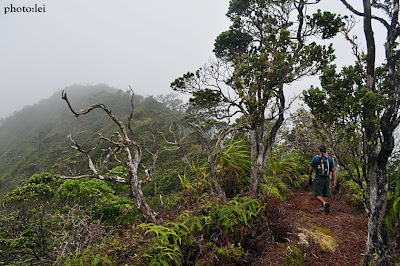 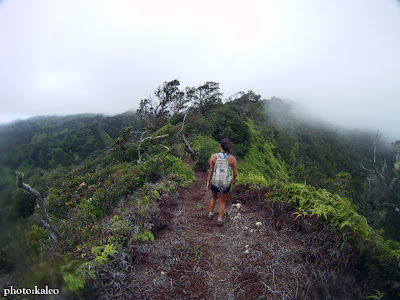 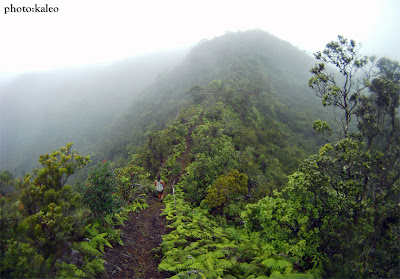 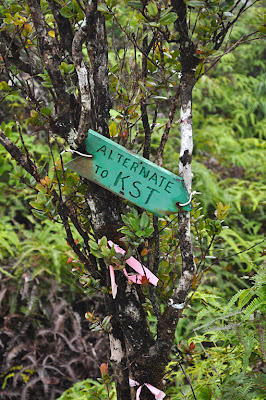 About 20 minutes before the summit, an alternate route to the KST heading toward Pupukea comes into view. 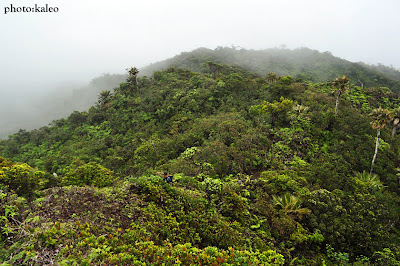 Walking on the ridge.  (photo: L. Yamasaki)  [Photo credit is wrong indicated in the picture.] 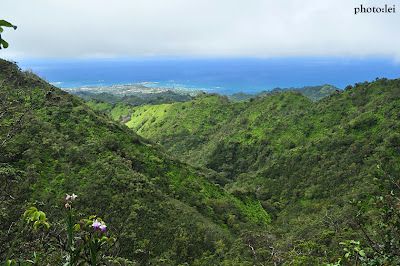 The view along the upper section of the Laie Ridge trail looking toward Hau'ula.  (photo: L. Yamasaki) 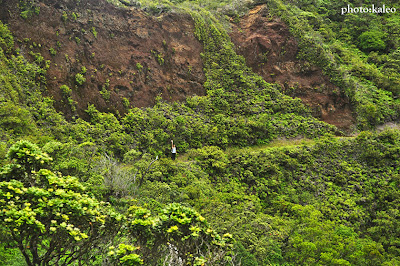 Lei calls this section of the Laie Ridge trail "The Green Waterfall." 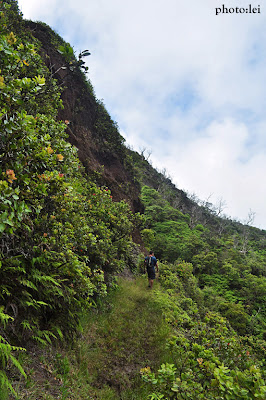 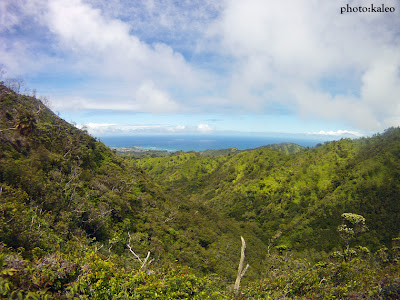 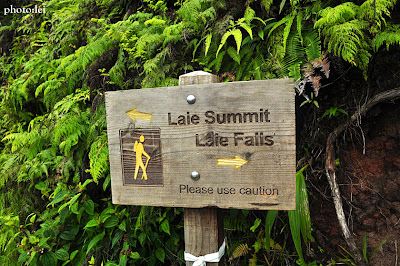 The signed junction to the waterfall.  From here it is an hour-and-a-half to the starting point.  (photo: L. Yamasaki)

Ulupaina is four mile loop hike in the foothills that edge the Valley of the Temples Cemetery in Kaneohe. Although short, Ulupaina offers up a great workout and can be done in less than three hours. The hiking route is a loop and can be done either way, with the counterclockwise direction being the most strenuous.

Hiking the loop clockwise, the trail coutours through small ravines along the left side of a ridge. At a certain point, about half an hour from the start, the trail takes a right and ascends gradually until it levels out near the junction for the route back out. Past the junction further upridge, the hike tops out at 960 feet elevation at a power line tower at the very base of the Ko'olau mountain range. Taking the junction for the route back out is mostly downhill on a broad ridge laden with ironwoods. The route is obscure at times, and the trail can be overgrown in some sections, but the trail always stays on top of the ridge crest and leads directly back to the start of the hike.

The trailhead is located on the far left corner of the Valley of the Temples Cemetery nearest to Kahekili Highway. A good landmark is the Ko'olau Center on Hui Iwa Street. Park on Hui Iwa Street. Walk across Kahekili Highway at the traffic light toward the cemetery. To the left is a pet cemetery with a low wall uphill. Walk parallel to the wall to the far end corner of the cemetery. The trail starts in the forest and is marked with pink ribbons.

To view more pictures and another write-up of my last outing along the Ulupaina loop trail, click on the folowing link. 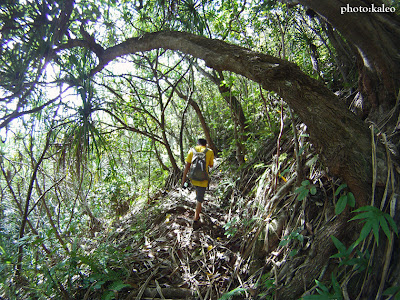 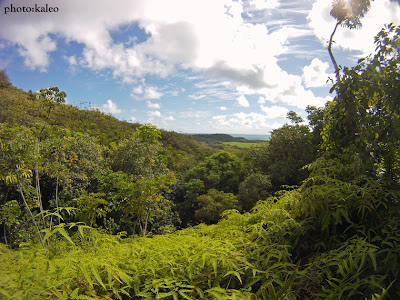 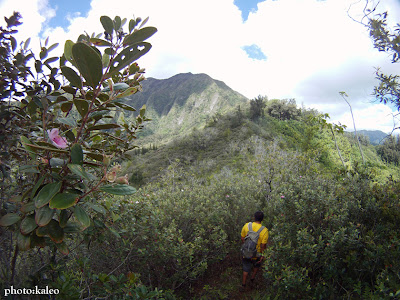 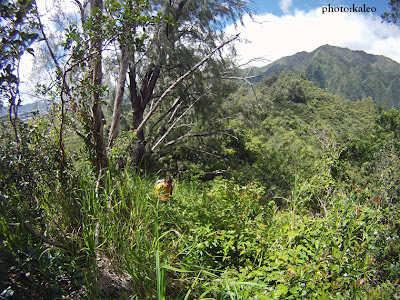 The Wiliwilinui Ridge trail is one of the most popular and easiest ridge routes to the Ko'olau summit. It starts at the top of the Waialae Iki subdivision and follows a dirt road that eventually turns into a hiking trail all the way to the Ko'olau summit. On a clear day, views of the windward side of Oahu can be seen from the top. At around five miles round trip, the trail caters to hikers of all levels.

For directions, click the following link:
Na Ala Hele directions the the Wiliwilinui Ridge trailhead

For more pictures and write-ups, check out my past blog posts about the Wiliwilinui Ridge trail by clicking the following links:
Wiliwilinui - June 14th, 2008
Wailupe Loop - January 24th, 2009 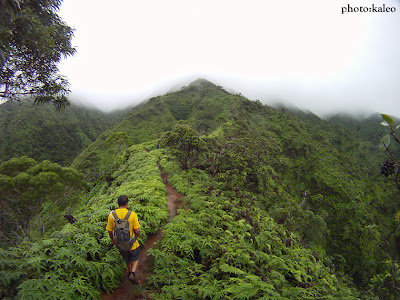 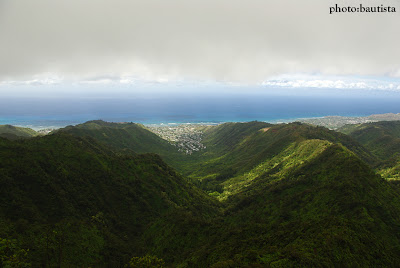 Looking back at Wailupe Valley.  (photo: B. Bautista) 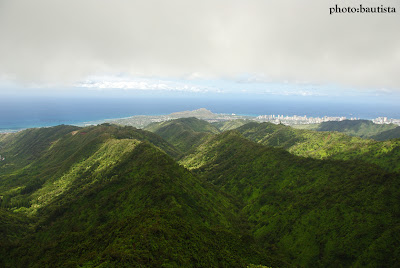 Looking towards Diamond Head and Waikiki.  (photo: B. Bautista) 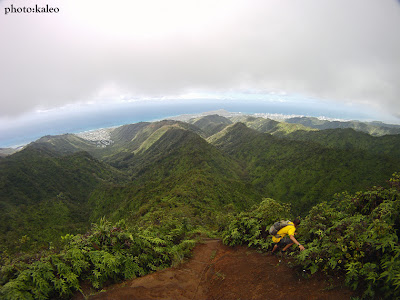 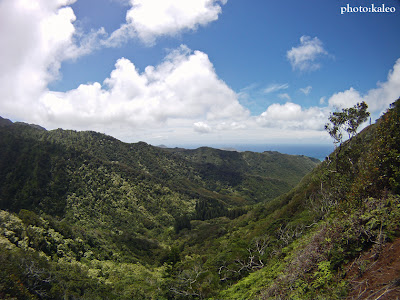 View of Wailupe Valley from the road.

Found this one by accident. We were looking to top out at Pu'u Kahuauli along the Bowman maintenance trail but found this trail instead. The weather was cold, windy, and rainy, making for a slippery and muddy trail. Plus, hiking in the clouds made us lose our sense of direction, and when we topped out on the summit, we found ourselves on the treacherous Kalihi Saddle near a prominent feature Pete Clines dubbed "Witch's Hat." A scout of the saddle ridge would have happened had the weather been good, but it was far too windy and wet to explore. The hike was short -- an hour tops -- but access to this trail is a problem. There is no where to park at the beginning, so someone had to drop us off in the morning and pick us up when we were done. Half fail, half success: at least we know where the saddle trail is now, but where the hell is the Bowman maintenance trail? 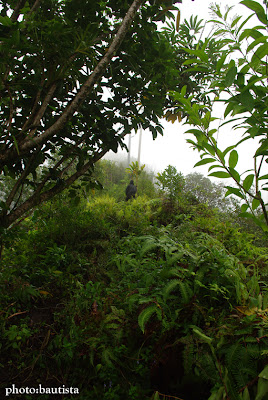 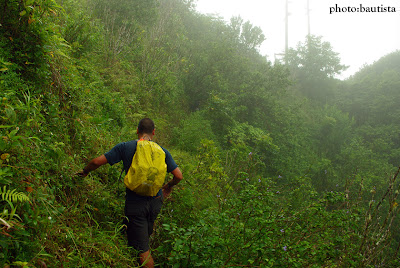 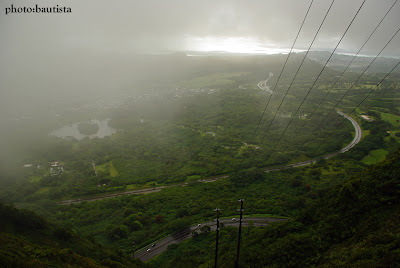 View from our top out point along the Kalihi Saddle.  (photo: B. Bautista) 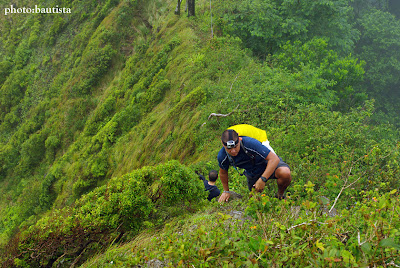 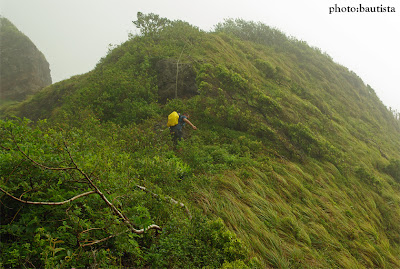