It's been three weeks since I fell fifty feet, head first off of Piliwale Ridge, and the healing process has been hell. My staples were removed a week after the incident, and my stitches are the kind that dissolve when the wound heals. So far it's been decent, but I had excruciating pain sensations shooting from the left side of my torso to my back after I got out of the emergency room, as well as a badly bruised tailbone. My doctor told me the left side of my torso experienced major internal bruising; the fall folded my body when I hit. He put me on some great pain medications (I've never heard of 650mg Ibuprofens, but whatever), he told me to stay off of work for two weeks (two weeks of doing nothing is depressing), and he told me to get some rest. Rest I did, but with all the medications I was taking for the pain, I started to develop onset insomnia. I couldn't sleep off the bat. I would have my eyes closed for four to five hours, but I wouldn't fall asleep, and this was all due to the medications I was taking. It was so frustrating, so I had to stop taking my medications and deal with the pain naturally. This went on for about a week until I got a full night's rest about several days ago. Bathing has been a bitch, too: I always forget that I can't put my wound directly under a running shower head, but sometimes I do, and it ends up bleeding when I'm done showering, and it just really fucking sucks. Plus, I always have to clean it with hydrogen peroxide after I bathe, wait for it to dry, and then plaster a layer of Neosporin. Then when I sleep, I have to remember not to sleep on the side that harbors my wound; I did that last weekend, and there was so much blood on my pillow that I thought I had opened it up all over again. But some stitches have healed, and aside from the wound being soft on some areas, the part that was stapled has been looking pretty good this week, so I told myself, "I'm gonna do a short hike," and I did. I did a REALLY short hike.

I just found out about a trail that starts right off of the Pali Lookout in Nu'uanu. It's called Pali Puka, and it's actually a really popular trail. If you look it up on the internet, there are loads of pictures, videos, and write-ups about the hike. With that said, it's an easy trail to find, and one I'm not going to bother giving directions for. Just remember that the trail starts at the left side of the Pali Lookout parking lot near where the buses park.

Daniel decided to hike with me today, and he, too, was on pain medications and muscle relaxers for the past two weeks for a pinched nerve from falling off Piliwale Ridge as well. I'm glad he's feels a little better. After Piliwale, I don't think I'm ever going to hike a non-state trail by myself again.

Walking across the Pali Lookout parking lot, we could see the trail start behind some bushes. It initially climbs steeply through a bamboo grove and eventually meets up with a utility pole. Past the utility pole, the trail hugs the edge of the ridge. The drop to the Kaneohe side of the ridge is vertical, and falling here would definitely be fatal. We took our time, and made it to a point where it looked like it was the last section to the "puka." (*Note: There is a hole in the ridge that was used by the Hawaiian warriors to spot incoming enemies. Pretty cool.)

Daniel led the way, and all of a sudden he was startled by a bunch of bees buzzing around a section on the ridge. "Not again," I thought. There was no way Daniel and I were going to get attacked by bees again with Piliwale fresh in our memory. And guess what we did? We turned around. Yep, I swear to god, Piliwale Ridge traumatized us, and I don't think we'll look at bees the same way we did before. And I know people do this trail all time, but there were a lot of bees around a certain section along the ridge. They weren't being aggressive, but we didn't want to risk triggering an attack. I mean, there wasn't as many bees on Piliwale, but there's gotta be a hive somewhere along the Pali Puka trail, and that made us turn around. I can't believe it. Just twenty minutes into the hike and we turned around. What a disappointing failure.

The Pali Puka trail is extremely short (not even half of a mile), and it is a bit dangerous. We didn't reach the super narrow section that I seen in the videos and pictures on the internet, but I will reach it once I gather up the balls to get over my fear of bees. I'M APIPHOBIC (for now)! WHAT THE HELL! It's okay, though. Next week is Kuolani-Waianu in Waiahole with the Hawaiian Trail and Mountain Club. Hopefully there's no bees on that trail. 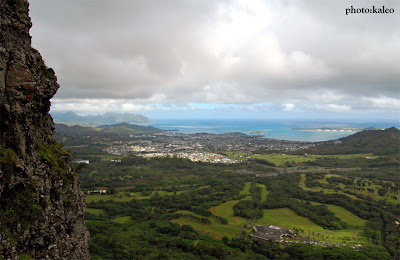 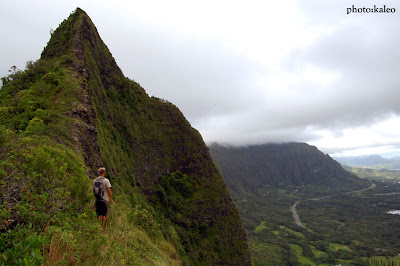