Comparable to previous years, 2012 was a slow year for myself out on the trails.  We did do some pretty awesome trails, nonetheless; however, after almost five years of blogging, this will probably be the last video summary put together by Island Trails.

Life has gotten busy, to say the least, and keeping up with the passion I've been doing constantly since I started has slowly dwindled into nothing more than a "leisurely thing."  Blogging, photographing, and videographing the outdoors became a major obsession that totally took control of my life for the good, the better, the bad, and the worst.  I had been waiting long for the moment where the obsession would let loose and keep me off the computer seat and out of the mountains -- and lo and behold! -- it finally has.

Don't get me wrong, though.  Hiking is still something I love and will continue to do, but I feel that the constant compulsion to gather pictures, video, and the words to describe the trails I've done has taken away precious time from certain things that really matter most to me.

Family and career choices have finally taken center stage, straying my focus away from the blog.  I will always be drawn back to the mountains, and in no way is this a farewell.  I'm just taking a break from blogging, plain and simple.  If I have the time or ever feel like blogging, I'll throw in a write-up here and there with some pictures, and maybe even a video.  But for now, I'm pau.  It's been a true learning experience and I don't regret one bit of it.

The Island Trails blog started off as a joke.  I thought to myself, "Let's see how long I can keep a journal of this." But after time passed, I noticed people taking interest and visitor traffic increasing, which in turn fueled myself to deliver more and more info to the people who wanted it the most.  And to be quite honest, if it wasn't for the hiking community's interest in my blog, I wouldn't have done all the hikes I set out to do.  And with that said, I thank all of you, old and new, from the bottom of my heart for all the inspiration throughout these past several years.  I was able to explore the island I was born and raised on and had one hell of an experience doing it.  Without all of you, Island Trails would be nothing, and for that I thank you so very much.  It really means a lot to me.

Much of my childhood summers were spent on the west side of Oahu.  School was out and my parents needed someone to watch me on the weekdays while they were at work, so every weekday morning they'd drive my sister and I all the way from Wahiawa to my grandma's house in Maili.  Because the ocean was right across the street, I'd take advantage of every opportunity I had to swim and surf -- with grandma and grandpa's approval, of course.  After countless summers, my relationship and knowledge of the ocean grew stronger.  I'd surf the reefs up and down the coast from Maili to Keawaula, with Makaha Beach being one spot I'd surf a lot.  While sitting on my board in the water waiting for the waves, I'd always look up at the towering mountain ridge right across the street from the beach.  I always wondered what it would be like to be on top of that ridge -- but how?  Well, in recent years I've noticed an obvious switchback trail starting from the the Makaha Beach parking lot and leading up the makai crest of Kea'au Ridge.  I found out last month that that's how you get to the top of the ridge, and it was awesome!

I was invited by Pete Clines and Dave Webb to hike up the Makaha Beach Switchbacks in November, but a conflicting schedule prevented me from joining them.  Luckily, Pete's invitation inspired me to try out the hike I had been wanting to do for so long but had somehow forgotten about.  I set a date in December and invited Jason Nakasato, Lei Yamasaki, and Kelven Del Rosario to join me.

We arrived at Makaha Beach around 7:15am.  We pushed off about fifteen minutes later following a faint trail abutting a paved road.  Leaving the paved road behind we soon hit a wide and obvious path with an occasional ribbon leading the way.  The rocky switchback trail gained elevation slowly, eventually hitting the crest of Kea'au Ridge after about an hour of ascending.  From the ridge crest of Kea'au we followed it mauka along a craggy and exposed ridge to Pu'u Kea'au (elev. 2,650).  Along the way were incredible views of the ocean, Makaha Valley, Ohikilolo Valley, the coastline view from Lahilahi Point to Kaena Point.

From the top of Pu'u Kea'au we immediately headed makai down an obvious side ridge.  Although not extremely dangerous, the ridge did have tricky sections -- loose rock, narrow sections -- that required caution along the way.  An interesting rock outcrop provided a memorable photo opportunity.  Jason and I made our way to the top of highest rock outcrop as Lei hiked a little ways back up the ridge to snap the dramatic photos of Jason and I standing on top of the pointy crag with the Pacific blue serving as a spectacular backdrop.

Further we descended as the midday heat set over us making for an uncomfortable hike along the lower portion of the ridge.  Hiking at a very fast pace, we headed off the right side of the ridge onto cattle trails littered with large piles of cow shit.  Unknowingly, we were in a cattle corral where we encountered bulls taking solace under inverted cliff faces, shading themselves from the midday heat.  We noticed the bulls; the bulls noticed us.  We hiked at an even faster pace at this point and finally reached the fence bordering the corral and jumped over.  We reached a paved road, followed it out to Farrington Highway, and walked back to our cars at Makaha Beach.  It was 2:30.

The hike was finally done.  Hot and sweaty, we jumped in the cool waters of Makaha Beach watching kids catch the waves of the wrapping north swell.  It had been years since I had taken a dip there, and it was a needed visit that was long overdue.  From the mountain to the ocean, I experienced both all in one day.  The ridge I stared up at as a kid from the ocean at Makaha, I finally set foot on.  It truly was a memorable day. 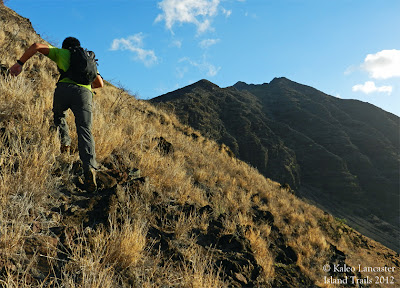 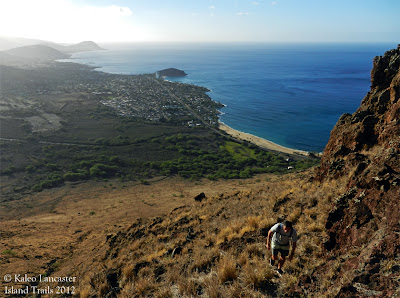 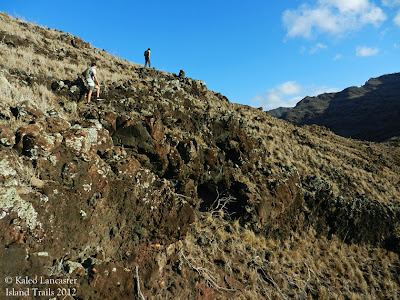 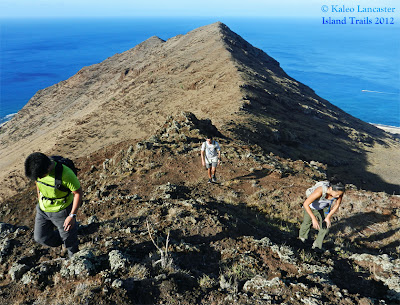 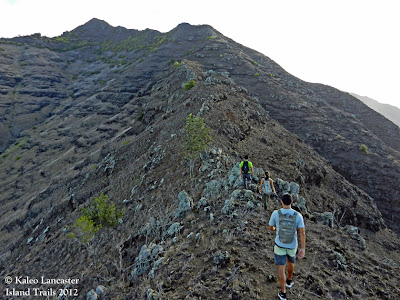 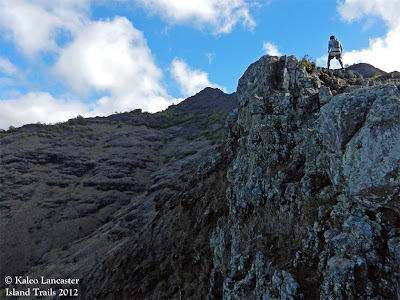 Click on image to view a larger version of the panorama. 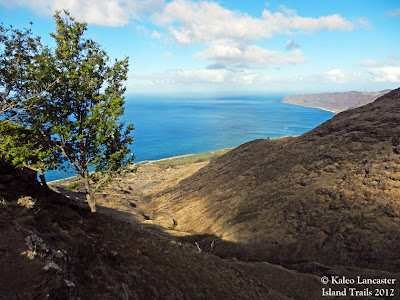 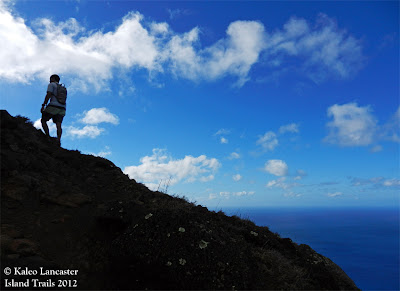 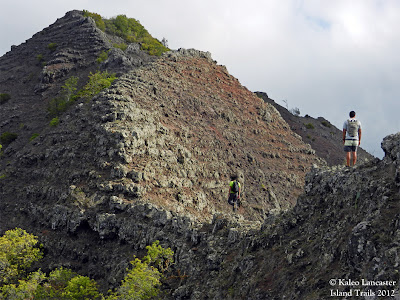 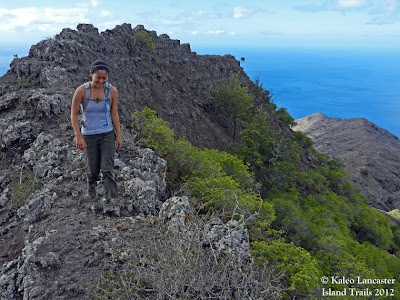 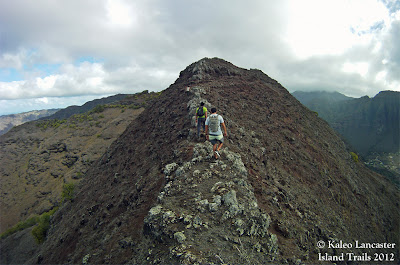 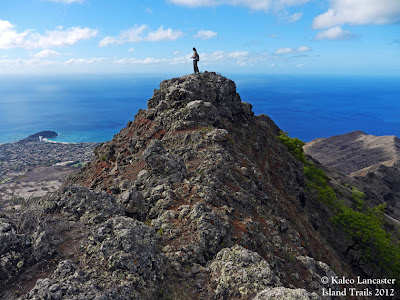 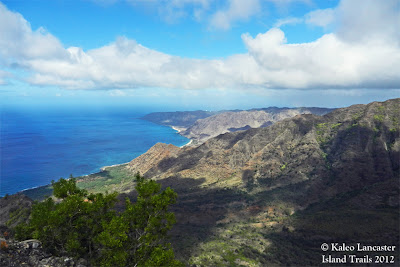 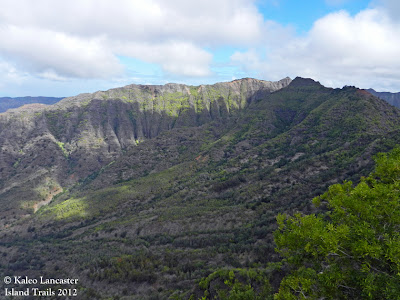 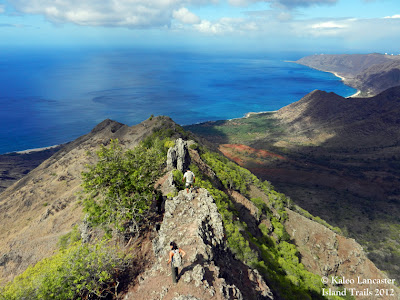 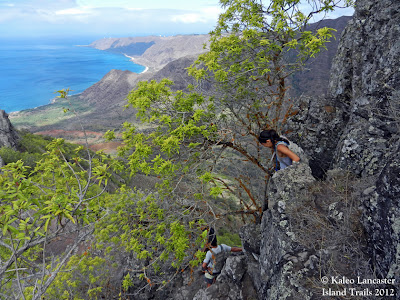 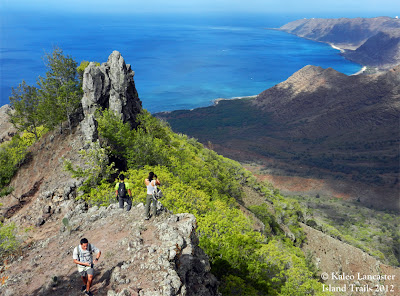 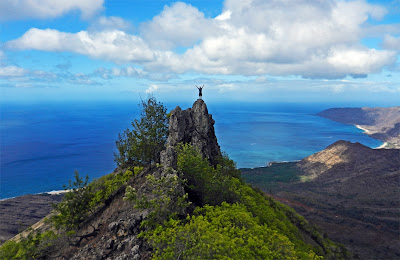 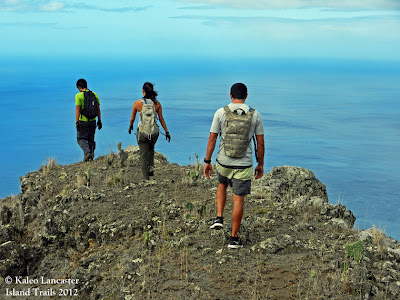 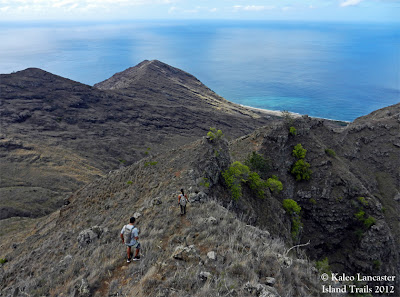 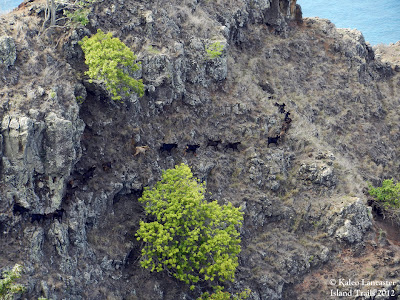 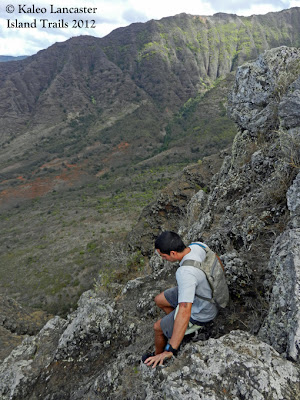