Ryan Chang, Keoni Napoleon, Kelven Del Rosario, Mark Balasbas, and I finally got to complete the section from Pupukea to Malaekahana Ridge.  Surprisingly, this section was easier than I expected, partly because we took advantage of fellow hiker Chase Norton's trail clearings.  Without his work, it probably would've took us a lot longer to complete.  It also was the first leg of Chase's incredible 8-day trek from Pupukea to Makapu'u that he completed in April 2012.  The route is mostly contour, making for relatively easy walking through lots of mud and lots of strawberry guava trees.

We started around 7:30am at the Pupukea Boy Scout Camp at the top of Pupukea Road.  Initially, the weather was insanely horrible and discouraging, but as we headed up the paved road and along the trail, by around 9am, the inclement weather changed for the better.  And when I mean better, it actually was perfect, with high overcast clouds and strong, gusty tradewinds to cool us off throughout the day.

At just about 9:30am, we hit the terminus of the Pupukea trail known as the Hina Benchmark.  About an hour beyond, past the Hina Benchmark is where it starts to feel like you're in the middle of nowhere.  The only exit route is either the Kahuku Ridge trail or turning around, and both options are very far apart.  Sprawling views of the landscape can be seen in every direction, most notably the awesome views looking west towards the Waianae Mountains.

A few times we lost the trail and had to do some route finding, especially near what we thought to be was the terminus of the Kahuku trail.  I think we actually went down it for a little while until deciding on turning around to get back to the KST.  Another time we got lost was at a signed junction that indicated Laie was in one direction and Kahuku was in the other direction.  Perpendicular to the sign was a very obvious trail junction that headed makai, so we followed it a ways until the trail just disappeared into a thick sea of uluhe.  I did see old faded ribbons on trees, though, so it must've been an old trail.  Shortcut to Malaekahana?  I don't know, but we called it quits after about twenty minutes of bushwhacking, turning around back into the direction of the KST.

Once back on the KST, the trail began its weaving through now lower vegetation.  Because of the exposure, the views here were awesome.  It was about 1:30pm, and we decided on bushwhacking up a little pu'u to an incredible lookout point facing west towards the Waianae Mountain Range.  After snapping photos, we headed down the pu'u back onto the KST, and headed to the junction with the Malaekahana Ridge trail.

After fifteen minutes past the overlook, we hit the Malakahana junction.  It would now take us about 2.5 hours to get Po'ohaili Street in Laie.  The way down Malaekahana was wide open due to a clearing that day by the Hawaiian Trail and Mountain Club.  The sun shone through the clouds, making for a hot and sweaty descent down the ridge, but it also made for some dramatic landscape shots with the sun behind our backs.

At 4:50pm, we reached Ryan's car which we had staged earlier in the morning.  We plopped down on the grass, took off our muddy shoes, packed up our gear into the car, and headed back to Pupukea Heights.  A long 9.5 hours of hiking.  Well worth it. 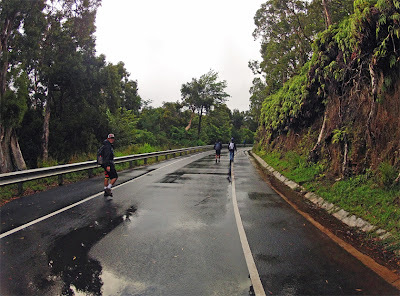 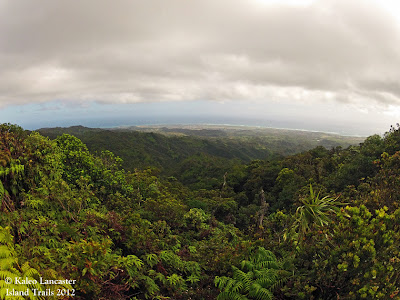 View from the Hina Benchmark. 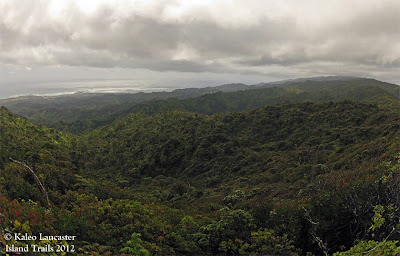 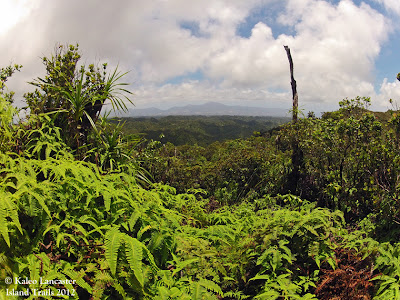 View opens up looking west toward the Waianae Mountain Range along a leeward section of the trail. 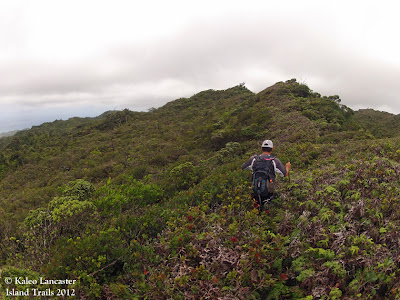 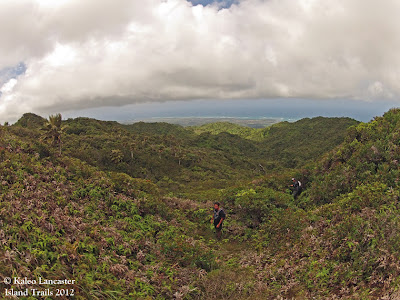 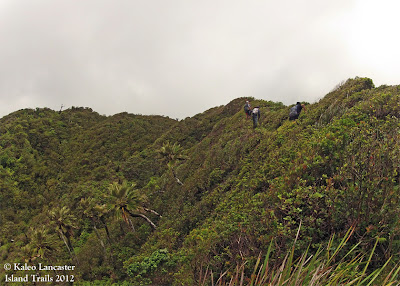 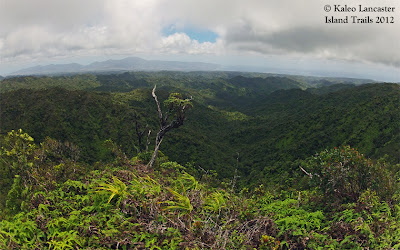 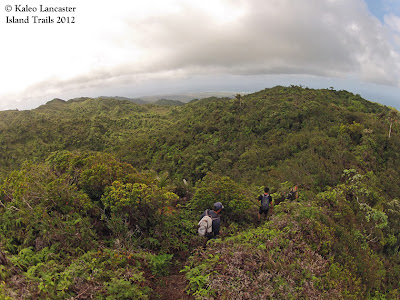 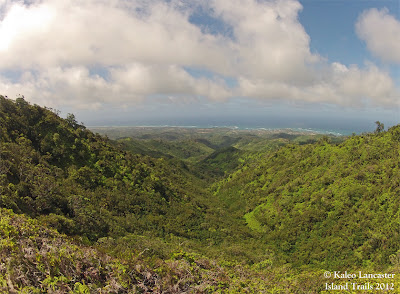