My skin is burnt to a glossy burgundy color from hiking up Ohikilolo Middle Ridge yesterday. A hat would've done me some good, but the blazing sun on the west side does its damage regardless of sun protection. Nonetheless, tolerating the blazing sun and merciless climbs was well worth it once we reached the summit. The view overlooking Makaha Valley on Kea'au Ridge is one of the best I've seen on the island.

If you start the trail near the ocean like we did, the hike up Ohikilolo Middle to Kea'au is one of the few trails on the island that starts near sea level. Walking towards the mountains, Daniel Napoleon, Nate Rubio, and I followed a paved road that eventually turned into a dirt road. After an hour of road walking we reached a trail that led into a forest. The trail was very muddy and reeked of cow shit. We also noticed evidence of fresh cattle footprints. The apparent size of the footprints kept our pace uphill a bit faster than normal.

As we gained higher elevation, the ridge narrowed and we were now out of cow territory. The ridge, though, was now littered with goat shit. My brand new Merrell shoes were being "broken in," but I had no idea I'd be baptizing its soles walking over pebbles of goat poo.

Heading on, we passed a short dike section: nothing extremely dangerous because the ridge never narrowed to the point where we needed to crawl. It was around this section that we could see an
awesome view of the many near-vertical ridges to the west.

Past the dike we could see the last steep climb to the summit. Initially, the trail contours around and to the right at the base of a large, brittle rock face. As we contoured, we spotted bruised and fallen trees left in the wake by past rockfalls. The ground was also loose and unstable. Rope was installed on a few steep sections, with the last fifty feet being the steepest.

At around 12:30pm, we finally reached Kea'au Ridge at around 2,900 feet. The view is without a doubt one of the best I've seen on the island. Straight ahead is Mount Ka'ala and Makaha Valley. Looking to the southeast we could see the peaks of Kamaileunu, Kawiwi, and No Name. To the northwest we could see Pu'u Ohikilolo and the remainder of the ridge leading to Three Corners. Behind us was Ohikilolo Valley and the azure Pacific Ocean.

Our intent was to get to the top of the pyramidal peak of Pu'u Ohikilolo, but a fence situated directly on the ridge crest leading to the peak didn't look like much fun, so we took some pictures, ate lunch and headed down the way we came up. Three hours later from the summit we were back at the car. One hell of a workout, and one damn painful sunburn. 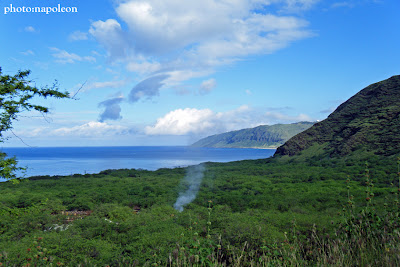 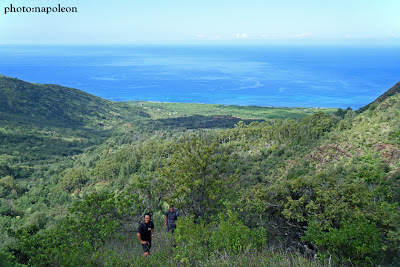 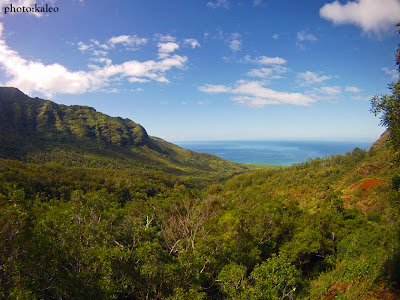 Are you sure we're on Oahu? 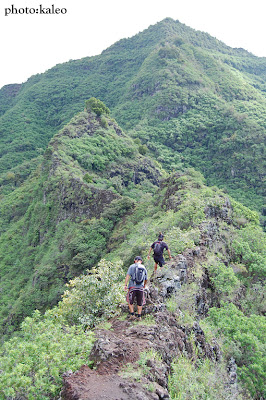 Daniel and Nate along the dike. 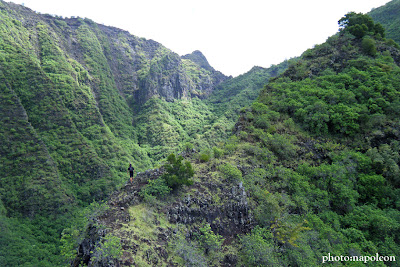 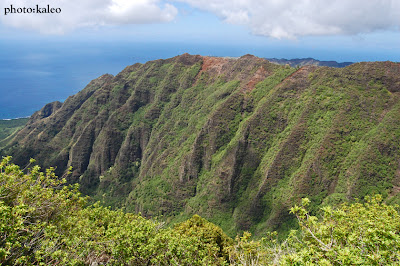 Seriously.  Are we really on Oahu? 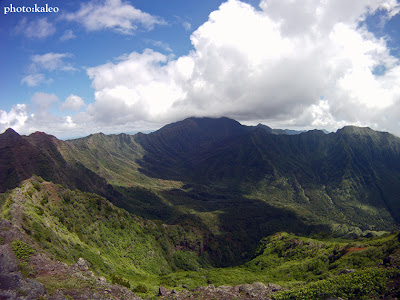 The amazing view at the summit. 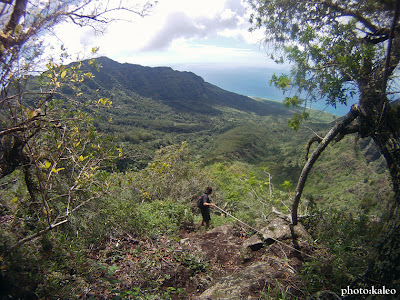 Nate on a rope section, heading back down.

Panorama looking to the south.