Wailele Gulch is one of those stream hikes that I will probably never do again.  With this second attempt I have to assume that maybe this gulch really doesn't have a waterfall at its end after all.  Maybe it's just a spring.  Maybe you'll get to the end, and all you'll see is water trickling out of pourous mountain rock rather than a big cascading flow of water.

Either way it doesn't matter now.  I fell in love with this gulch the first time to the point of obsession, with its crystal clear water and desolate location.  Now I hate it.  It is extrordinarily beautiful, but the effort it takes to get as far as we did just to turn around was not worth it.  Hiking about five hours upstream through multiple hau tangles and heavy rain squalls and not being able to successfully complete what you set out for is disappointing to say the least.

Out of all the stream hikes I've done, Wailele is the only stream where at a certain point I could not tell which way was mauka and which way was makai.  All streams lead to the ocean, but Wailele winds so much and so deep into the Ko'olaus that the towering ridges surrounding the area make it hard to distinguish which way is which.  Add in some rain with the gulch walls noticeably closing in and you place yourself in danger of a flash flood.

Our late start at the trailhead was partly to blame for failing.  I'm pretty sure if we started at the crack of dawn, we probably could've made it to the back of the gulch with enough time to head back before sundown.  But the physical aspect of the hike is unlike any I've done; it even rivals some of the hardest ridge hikes I've done!  In addition to gaining elevation gradually on the way in, it's actually the hike back that takes a brutal toll on the body, especailly on the upper body.  Picture yourself doing arm dips and swinging your legs in front of you for four hours, all while trying not to roll an ankle on the slippery streambed.  Not to mention going through all the hau tangles you went through all over again but in reverse.  What follows is a couple days of full body muscle fatigue and recovery.

For those seeking a wild and remote gluch adventure, Wailele Gulch is it.  Just don't bargain on it being an easy stroll alongside a stream.  This stream "trail" is long and demanding.  If anyone reaches the very back of the gulch, let me know what you find.  Hopefully the long trek reaches something worth writing home about. 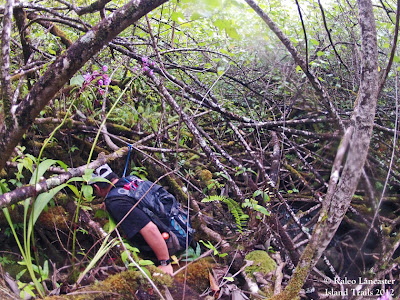 Ryan navigating his way through just one of the many hau tangles. 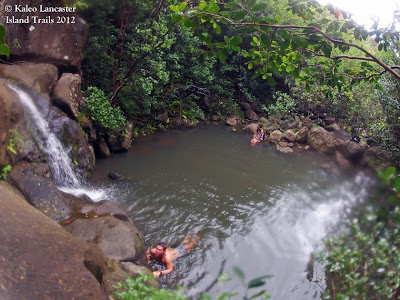 Taking a dip at the 2nd waterfall, about four hours upstream. 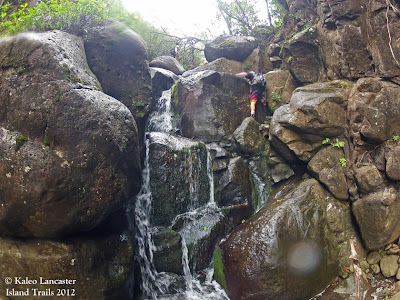 Climbing the upper portion of the the 2nd waterfall. 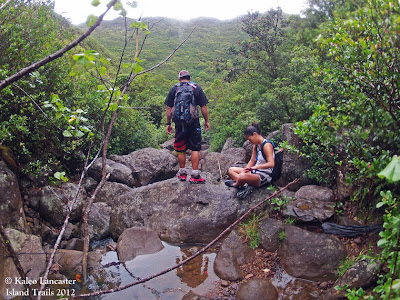 Lei and Ryan preparing themselves for the long way back out of the gulch. 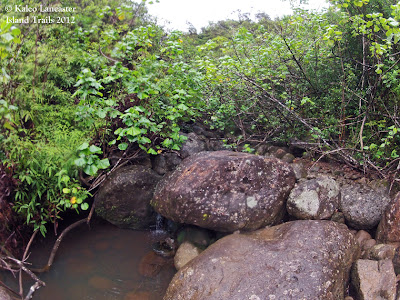 Our turnaround point, about 5 hours upstream, just before yet another dreadful hau tangle.