A lot of attention has recently been given to a ridge route that starts at the Pali Lookout in Nu'uanu Valley.  The route traverses the popular Pali Notches trail and several menacing obstacles, eventually topping out on the highest peak in the Ko'olau mountain range, Konahuanui.  The west ridge leading to Konahuanui has become a very popular route for those seeking an adrenaline-inducing scramble.  Konahuanui West ridge is also a very historical site; it is where the Battle of Nu'uanu was fought, leading into the unification of the Hawaiian islands.  More info on the Battle of Nu'uanu can be found by clicking here.

I've had the Konahuanui West ridge route on my to-do-list for around three years.  It didn't get much publicity until Pete Clines, Duc Ong, and Laredo Muredo did it in 2009 (or was it 2008 or 2010 -- I forgot the year).  It is very unlikely Pete and crew were the first, but after reading Pete's write-up on it, Pete was probably the first to actually fully document the trek.

After hearing about Pete, Duc, and Laredo's successful hike up the Pali Notches trail and down Piliwale, word spread quickly into the hiking community along with Pete's PDF document.  Several hiking groups jumped on the opportunity and followed suit, completing the trek successfully as well.  Within a month, over five groups had done the hike, and it was safe to say that the ridge was getting more traffic in just one month than it did in the past decade.  A hike that I found so intriguing had lost its somewhat "virgin" appeal.  I left alone the idea of completing it for later.

Fast forward to August 2012, and I finally got the motivation to do it.  I juggled with the options of either going down Piliwale or the regular trail from K2.  I had done both already, so I chose to extend the trek along the Ko'olau summit ridge all the way to the junction with Manoa Middle Ridge instead.  From the terminus of Manoa Middle Ridge we'd descend and end in Manoa Valley.  In prepartion for the hike, I wanted everything to be perfect: cool, breezy tradewinds, partly cloudy, dry conditions, and a summit free of clouds atop Konahuanui, a rare event atop the muddy and moist mountain peak.  Weather forecasts a week prior looked promising, so I set the date and called Jason Nakasato, Micah Komine, and Scott Fisher to join me.

Past the second notch the ridge gets down to serious business.  The ridge becomes extremely narrow just before reaching an obstacle known as "The Chimney."  The name coincides with the smooth and shute-like nature of the rock face that needs to be climbed.  Like a chimney, without rope, you'd have to shimmy your way up using all fours.  Luckily, rope was already installed, giving us added security on the way up.  Beyond the chimney the rock gets even more brittle, much of it cracking and crumbling with every step.

The most dangerous part of the hike was just ahead.  We were confronted with a large vertical rock face that we had to contour on its leeward side.  Although webbing was installed hugging the mountainside, the danger was obvious.  A horizontal ledge merely a foot wide is all there is to use as footing until scrambling again over loose dirt and rock.  The drop at the ledge is unforgiving, plummeting a couple hundred feet into Nu'uanu Valley.  Jason went first and made it look easy.  So did Micah.  I went third and found the webbing to be more of a nuisance than helpful.  Along the narrow ledge, the ground under my feet felt weak. I inched my way slowly, not wanting to put to much foot pressure along the ledge.  I began the scramble.  As soon as I started to climb a rock the size of a large marble fell right onto my naked right eye.  The little rock hit me hard enough lose my footing for a moment, as well as my vision.  I paused for a second to regain my vision and footing, finding a reliable hand holds for added security.  After regaining my composure I made it back onto the crest of the ridge.  Looking ahead there was a little more scrambling involved but much more forgiving than the contour.  Scott was the last in line and I took out my GoPro camera to get a top-down view of him scrambling up the sketchy contour.  He made it up to the ridge crest with no problem.

Higher and higher we ascended.  Major obstacles were few and far between.  I remember having to climb an eight foot boulder situated directly in the middle of the ridge without any option for a contour. We had to climb up and over the boulder to proceed further -- tricky, but doable.  Another noteworthy obstacle was a long rope section nestled in vegetation along a wet and slick portion of the ridge.  No drops to worry about there, just a lot of upper body strength involved to advance further.
Beyond the long rope section the ridge got muddier, a sign that the summit was near.  After about three hours of ascending, we finally reached the top of a Konahuanui, cloud-free!  The view was phenomenal!  From our vantage point, we could see from Kualoa all the way to Makapu'u Point, as well as the cloud-free neighboring peaks to the west along the Ko'olau mountain range.  In the far off distances, we could even see the Waianae Mountain Range to the west, and the islands of Molokai and Maui to the east.  The sun was out, the tradewinds kept us cool, and we were alone.  We sat down, ate lunch, and rested for around hour, enjoying the awesome views laid out in front of us.  After our much needed break, we packed up and pushed on along the Ko'olau summit ridge to the terminus of Manoa Middle.

The stretch between Konahuanui and Manoa Middle was mostly downhill.  An obvious swath and ropes along certain section assured us that we were now on familiar hiking territory.  Hiking two-and-a-half hours lapsed: we reached the ribboned terminus of Manoa Middle.  After just under two hours of descending, we found ourselves following Waiakeakua stream back out to civilization.  At 4:30, we reached my car and shuttled back to Jason's car at the Pali Lookout. 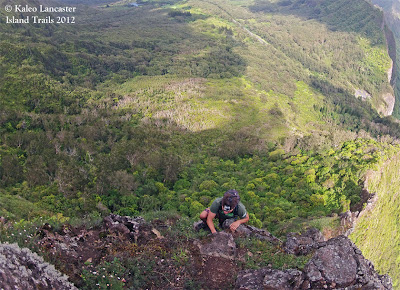 Scott scrambling up the contour after the chimney.
﻿ 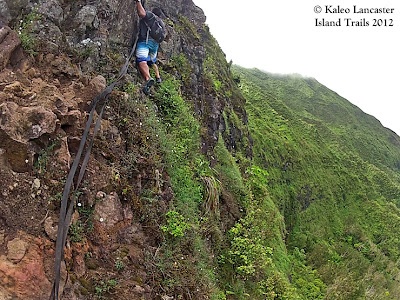 Micah inching his way along the thin ledge of the contour.
﻿ 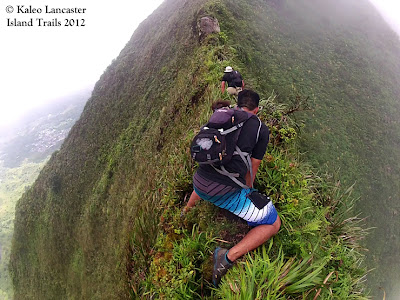 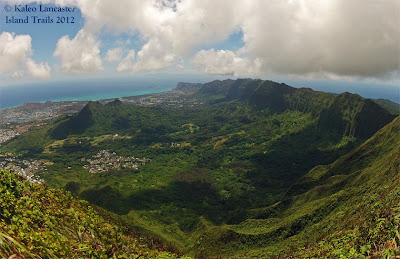 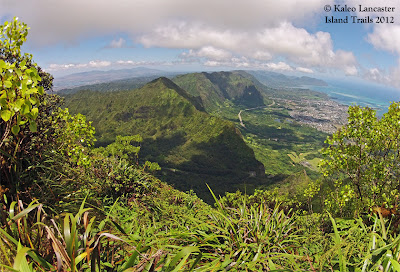 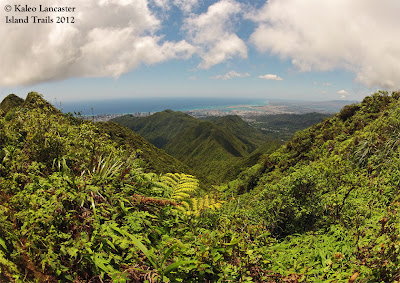 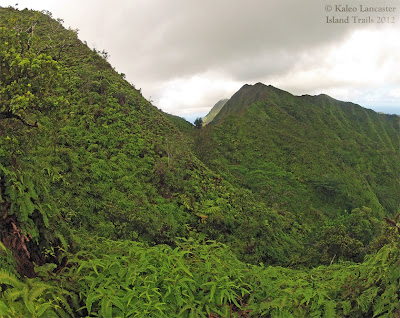