Well, the waves have been good, and I surfed three days in a row last week. I haven't been bodyboarding in a while with all the hiking I've been doing this summer; on top of that I have the bomb-load of Fall Semester school work, with the addition of studying for the fire fighter test. I almost forgot how it felt to catch a wave and feel good about it. But I got the wave buzz out of my system, and I got back into hiking mode this past weekend.

I had planned to hike Kahana Valley, but I decided to do a hike that is said to be "closed." The Kahekili Trail is known to be the 2nd most dangerous hike to the peak of Pu'u Manamana, so Chase and I were pretty excited about it. The trail is an "honest" trail, meaning that it climbs with out dropping or rollercoastering.

We parked at Swanzy Beach Park in Ka'aawa and headed to the trailhead which starts between two houses. The trail barely pokes into Makaua Valley and immediately takes a left turn up the side of the ridge. The ascent was really steep. The weather was also extremely hot. Within fifteen minutes Chase and I were covered in sweat. The vog haze and the absence of wind made the hike a scorcher, probably the hottest I've been on other than Mau'umae Ridge.

The ridgeline was mostly unshaded with some huge drops on the eastern side. I've been on worse, but these drops were still deadly. After some weaving around vertical rock sections we began a short descent into an upper valley with a trickling stream. I found out later that we were supposed to follow the stream in the direction of the ocean until the stream dropped off into a waterfall. When Chase and I reached the stream we immediately spotted a ribbon showing a trail that climbed out of the valley. Usually trail ribbons are bright pink; this ribbon was bleached from the sun, and you could tell the ribbon had been there for quite a long time, meaning that the trail we were about to follow was going to be one that not many people have used recently. Our prediction was right.

The trail climbing out of the valley was the most overgrown trail I have ever experienced. There were no ropes either, and there were rarely any trees or branches to aid our climb. It was so overgrown and steep that I had to put my camera away; I wanted to get pictures of how overgrown it was, but it was so hot and uncomfortable I just thought "to hell with it." Chase and I were ascending out of the valley in head high, scratchy uluhe ferns accompanied by an extremely slippery and muddy trail. Not only that, but we were ascending out of the valley around the hottest time of the day. We were afraid we were going to run out of water, but we did pretty well with our 2-liter hydration packs.

After a grueling mile-and-a-half ascent, we finally reached the junction with the Pu'u Manamana trail. We turned right and headed to a rest spot Matt and I had ate lunch at when I did Pu'u Manamana back in May. We took a good 45-minute lunch break and headed down the Crouching Lion side of Manamana. We eventually reached Kamehameha Highway around 2:30pm. Chase had bought a mile counter before the hike and put it to good use; it said we hiked around seven miles. With a 9:15am start and a 2:45pm finish I'd say we made pretty good time. 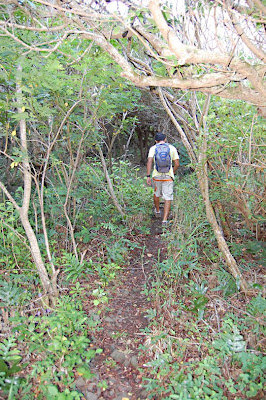 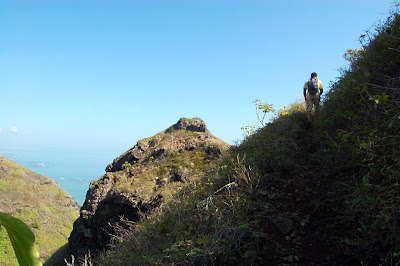 Just before breaking out into the open ridgeline. 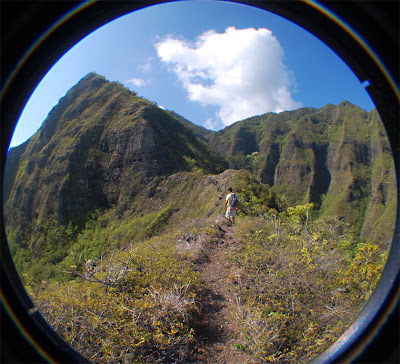 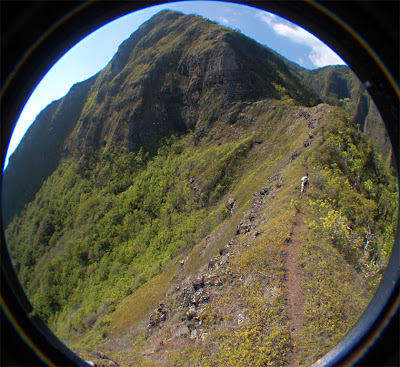 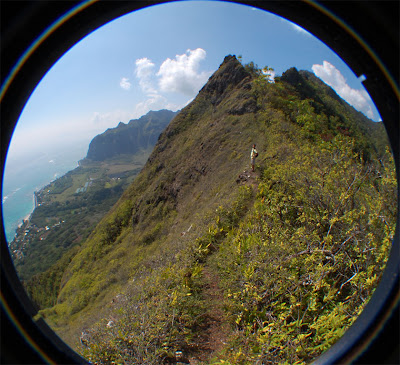 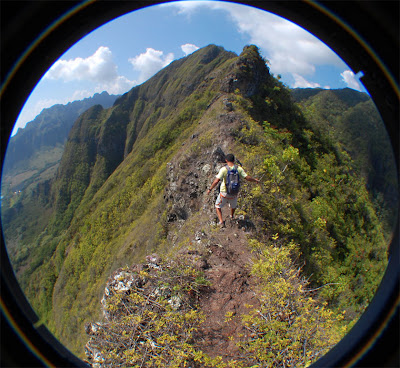 One of the more narrower sections. 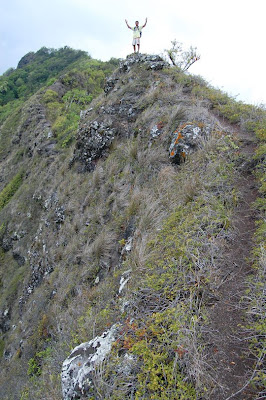