I'm typing this with sore feet, aching quads, bloodshot eyes, and a cramped ass. After a little over three months of no hiking, Chase, his cousin, Caleb, and my high school friend Daniel, decided to hike Wailupe Loop while extremely out of shape. The trailhead is easy to find. Take West Hind Drive in Aina Haina, find Hao Street, and follow Hao Street to its dead end. The trail starts to the left of an old rusted gate. The Hawaiian Trail Mountain Club says the entire loop is about six miles; they also claim it to be an intermediate hike. I'd have to rate it a tick over intermediate considering how many long hills needed to be climbed.

The initial portion of the hike follows a lesser used dirt road. Fifteen to twenty minutes into the hike an obvious junction comes in on the right. From here the trail gets kind of confusing. There are a few junctions that one can get lost on, but as long as you cross the stream, you'll be fine. Crossing the stream soon gets you to a fork in the trail; take the left fork. The left fork took us to the bottom of a steep hill to be climbed all the way to the ridge crest. The hill was steep and lung-busting, but we made it to the ridge crest and was welcomed with cool breezes coming from the east-northeast.

The majority of the ridge to the Ko'olau summit was shaded. The usual strawberry guava trees and uluhe ferns were passed. With countless steep climbs abound, our legs were on fire, but the cool tradewinds made the hike more enjoyable than naught. Climbing more and more we reached a hunter with his dogs. He said one of his dogs was up ahead, assuring us that he wouldn't bite -- and bite he didn't. The dog followed us a ways up the ridge. We gave the dog some water to drink, and after about fifteen minutes of drafting us, the dog was gone.

A few rest spots provided comfortable seats and ample shade, with views of the ridges to the east and west. I shared an orange with everyone at our last rest spot, and we headed up the ridge, with a good view of the last very steep climb to the Ko'olau summit. We pushed through heavy brush, some parts with ropes and some parts without any. We reached the Ko'olau summit at around 10:30am, two hours from the trailhead. The summit was clear of clouds, and the view, one that Chase and I have seen several times, was lain out in front of us once again, just from a different peak.

We snacked on beef jerky and trail mix, allowed our sweat to dry, and headed left to hike on the narrow summit ridge that would eventually reach the apex of the Wiliwilinui Trail. Daniel led the way even though his fear of heights was grabbing him by the balls. Chase, of course, was ready for the exhilarating push on the narrow summit ridge, with its massive 1,500+ foot drop of death to the right side. Caleb, however, was having second thoughts. Caleb ended up making up his mind that the summit trail was too much for his taste, so he decided to go back the way we came up. Chase, knowing all too well how Caleb felt, decided that he'd accompany his cousin on the way back down. Daniel and I proceeded to Wiliwilinui.

After twenty minutes on the narrow, windswept summit trail, we finally reached the peak of the Wiliwilinui Trail. We ate some more food, had a long rest, and headed down to Wiliwilinui's dirt road. My temptation to find a junction always ends up being the wrong decision, and today was no exception. As Daniel and I headed down the dirt road we found a left junction that we thought would lead us back down to our car. Orange ribbons hung from branches above, and the trail seemed legit, but it was extremely steep. So steep in fact that we knew that we went the wrong way because after a while we couldn't spot any more orange ribbons. We decided to stop descending and head back up to the dirt road. A few more minutes on the dirt road and we finally found a well marked junction with fresh pink ribbons that were probably left by the HTMC on their January 11th, 2009 trail clearing: and a great job they did. The descent was steep, but it wasn't as steep as the unmarked junction we took earlier; the abundance of strawberry guava trees aided our descent as well, its strong trunk giving us comfort on the steepest sections.

We reached the bottom, taking a right, then a left (at this junction, an unmarked and obscure right comes in which should not be taken), and then bearing right/straight instead of left at an obvious junction. From there the trail took us straight back to the rusted gate. Chase and Caleb had beat us to our car, and after about five-and-a-half hours of hiking (2pm), we reached our car as well. 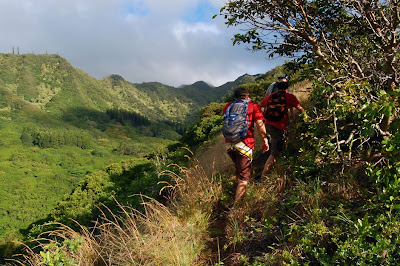 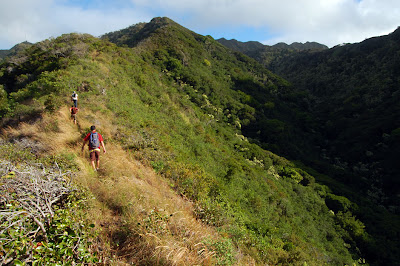 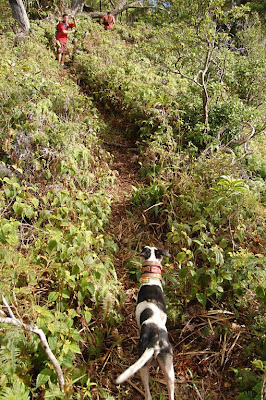 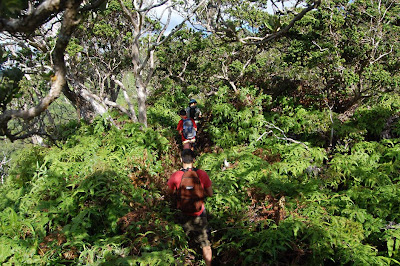 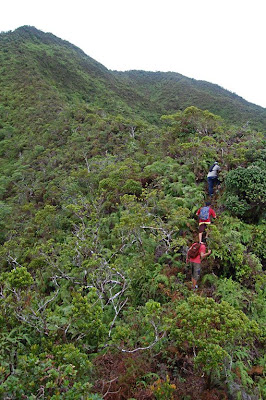 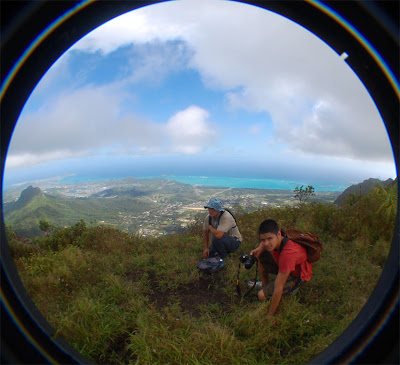 Daniel (left) and Caleb, resting at the top. 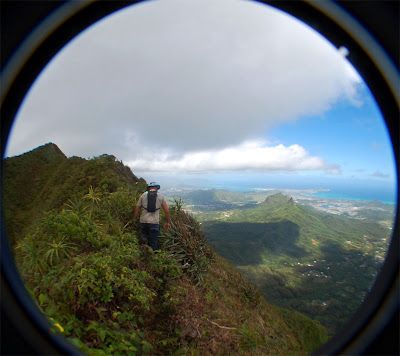 Daniel, walking on the Ko'olau summit ridge to the peak of Wiliwilinui. 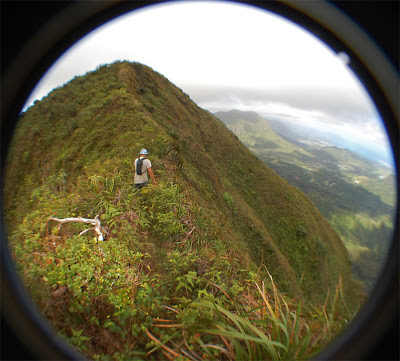 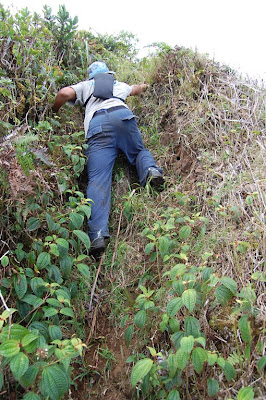 All fours were required at times. 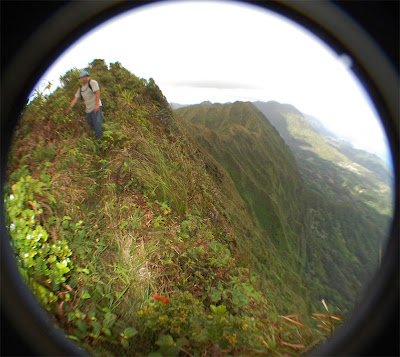 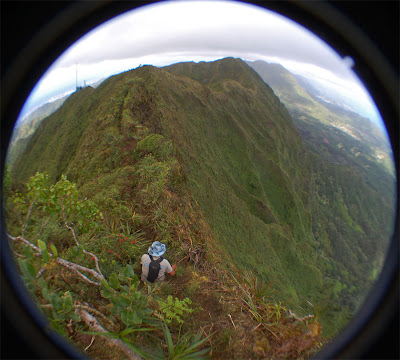 Not too bad for someone who's afraid of heights. 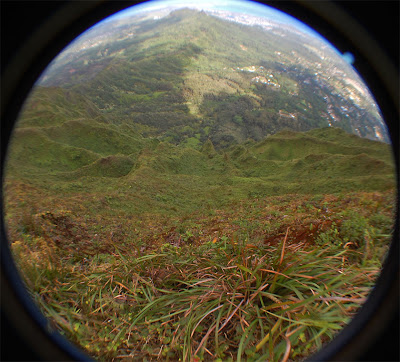 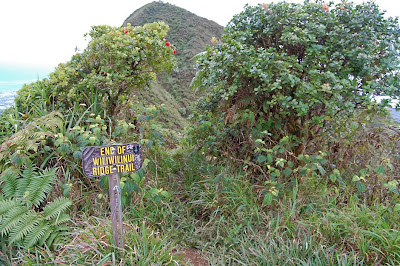 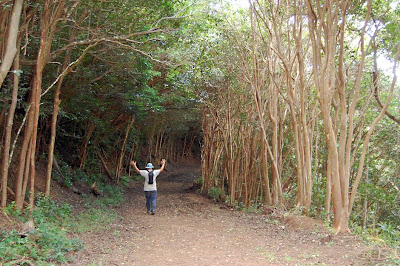 Yeah Kaleo!!! Those pixs are nutz. Call me next time. Shoots. Rio.

I've hiked to the end of the loop from wiliwili nui and am very interested in checking it out it from aina haina side. the automatic music tripped me out for a second, you have good taste

Thinking of doing this this coming Saturday :)
Thanks Kaleo for your site...i always refer to it before i venture off into the hiking world here.
Aloha
Victor