After hearing so many good things about the hike to Ka’au Crater in the back of Palolo Valley, I had to try it out for myself. Getting to the trail is simple. Take the 6th Avenue cutoff on the H-1. Turn left. Take a right on Waialae Avenue, and then take a left on 10th Avenue. Drive a ways until the road forks. The right fork is a street called Waiomao Road. Drive to the end of the road, and park just before a private driveway.

The weather was really sketchy for a stream/waterfall hike. Instead of walking up the private driveway to the official trailhead, Daniel and I took a trail to the left of the gate at the beginning of the driveway. This trail immediately took us down to Waiomao Stream. After following the trail upstream we eventually spotted trail ribbons, indicating that we were on the right track.

The trail to the first waterfall doesn’t do much climbing at all, and it isn’t very long either. There is a short, gradual ascent out of Waiomao Stream, but from there the trail levels out as it proceeds deep into the heavily vegetated and lush Palolo Valley. The only detraction is a metal pipe that has to be followed all the way to the first waterfall. The pipe does get irritating at times, but on this day, the trail was really wet and muddy, so using the pipe as an option to walk on to avoid the muddy areas kept our shoes clean for the most part.

We got back to our starting point at 3:30pm: five hours on the trail. Going back to the car was a cinch. From the first waterfall, it took us only thirty minutes to get back to the trailhead. Thirty minutes! With that said, this is probably one of the most easily accessible, mulit-tiered waterfall hikes on the island. The climb up to the second waterfall does require some muscle, but as long as it is taken slow, the second waterfall is worth the climb from the first waterfall. There is a sketchy section when climbing the right side of the second waterfall. The trail is extremely narrow with a perilous drop on one side. The climb up the third waterfall is extremely dangerous. Because the climb up the third waterfall uses both the left and right sides, you will get your feet wet, and it is very, very, very slippery. But if you’ve got what it takes, you’ll be rewarded with an awesome view of a hidden crater nestled along the southern walls of the Ko'olau Mountain Range. I’m looking forward to the summit hike this summer, so keep checking the blog for an update. 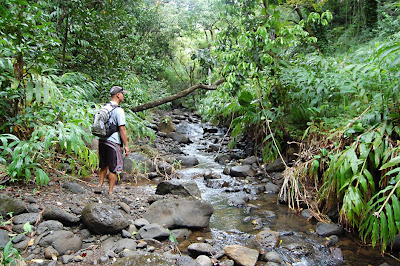 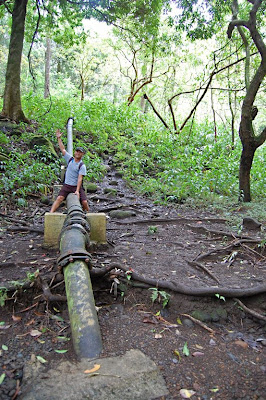 The beginning of the pole that has to be followed all the way to the first waterfall. 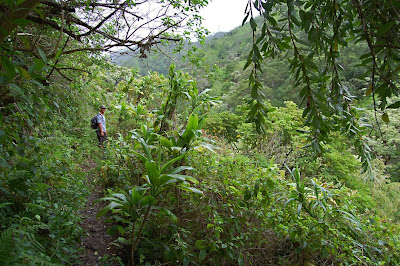 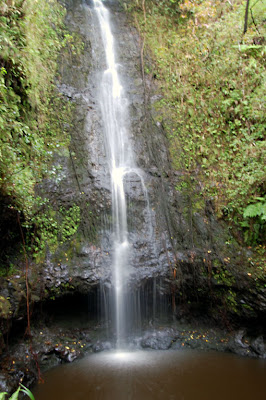 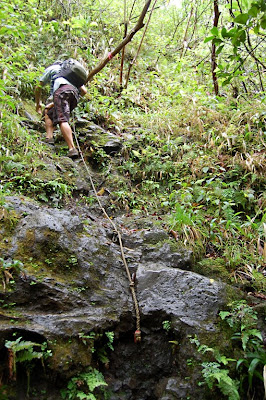 Daniel climbing to the second waterfall. 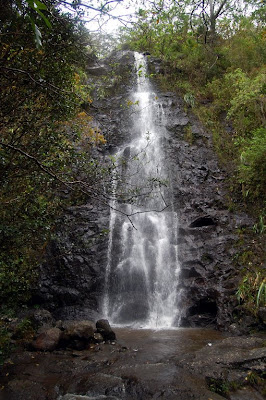 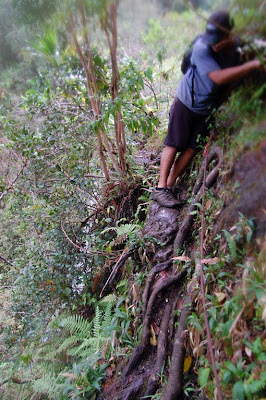 Narrow spot near the top of the second waterfall. A fall here would definitely seal someone's fate. 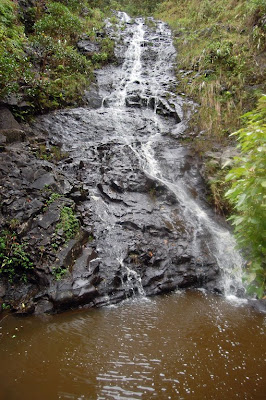 The bottom of the third, long waterfall. 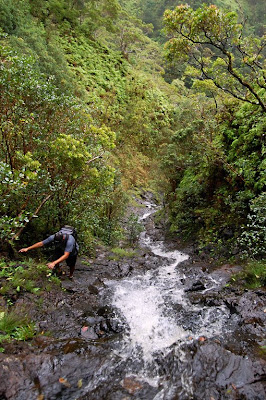 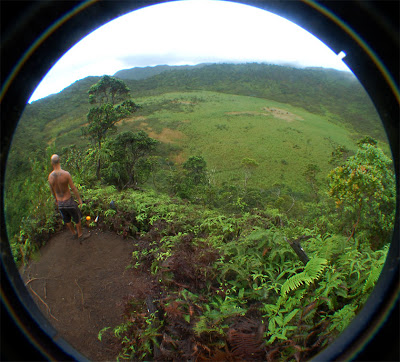 Rest spot/lookout at the rim of Ka'au Crater. 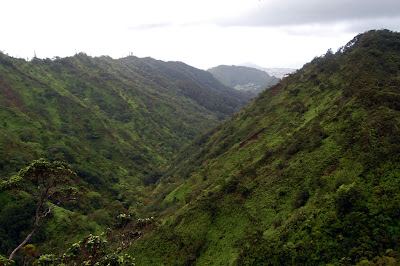 Looking back at Palolo Valley towards town. 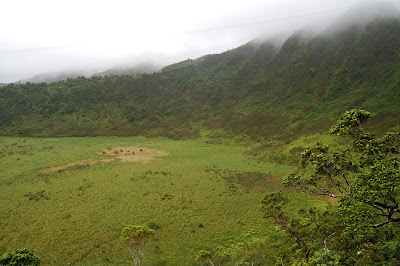 hi there. there's actually a loop trail you can take once you get up past the third waterfall, it cuts the hike time down by about 1/2 an hour and it's pretty. ohia trees, strawberry guava. also, not quite as muddy. if you head towards the crater, you'll see the trail on your left, opposite of the trail that takes you up to the ridge/summit. i hope you go back in the summer and get to do it. it's a beautiful and worthwhile ending point.

also, did the laie falls hike. it was fun. thanks for the blog on that. would've probably never done it otherwise.

The crater run from the east side to the Koolau Summit Trail is definitely worth doing... The howling winds give you the feeling that you're on the ledge of a 100 ft building. It gave me the same feeling that I got on the Kalena side ridge.

Thanks for the blog post. It inspired me to do this hike. And thanks to Christy for posting the tip about the trail down. There were other hikers at the top who, like my girlfriend & I, didn't want to climb back down the waterfalls. It was such a relief to take a nice, scenic stroll back. Seriously...thanks so much!

What are the two songs on this profile? Thanks. Nulwee@yahoo.com