This past Sunday was the first hike I ever did in Manoa Valley. It was a ridge hike known as Manoa Middle Ridge which was recently cleared by several people who wish to remain anonymous. It took them eleven separate days to bushwhack, and right now, the trail is so clear that it looks like a state trail.

Manoa Middle starts on the same trail leading to Waiakeakua Falls. I've never been to Waiakeakua, but I did bring along two people who had been to the falls before: Ryan Chang and Keahi Kaawa. Without them, Brian Bautista and I would not have found the start of Manoa Middle.

The ridge starts off after some rock steps at an inconspicuous spot on the left. The initial climb is very steep. Ropes are affixed to trees at the steepest parts. The trail eventually levels out and begins climbing gradually towards the Ko'olau summit. Fresh ribbons marked the route. Some ribbons were written on, indicating the trail clearing progress in days.

Before reaching the summit, we encountered a long, semi-steep section with a long rope installed near the foot of the hill. At 11am, we reached the Ko'olau summit between Konahuanui and Awa'awaloa (Mount Olympus). We sat and ate lunch in the clouds for a brief moment, but after a few minutes we were greeted with views of the windward side as the clouds tried to lift and dissipate. To our right we could see the narrow summit ridge toward Awa'awaloa. Our route for today would cross the narrow summit ridge and head down Wa'ahila Ridge to Kolowalu.

The summit ridge trail was in very good condition thanks to the clearing efforts of Duc Ong, an HTMC member that recently hiked from Konahuanui to Makapu'u. What looked to be like fresh rope was installed on a very narrow section hidden in an ironwood grove. Just after the ironwood grove was another narrow section that's been dubbed "Sedan Rock." The section consists of an exposed outcrop of boulders along the narrow ridge crest. Much of the rock is brittle, so we had to take extra caution traversing this particular section.

After passing Sedan Rock, the trail undulates along the summit ridge until finally reaching Wa'ahila Ridge. We headed down the Wa'ahila "freeway", reached the Kolowalu junction, and dropped back down into Manoa Valley. 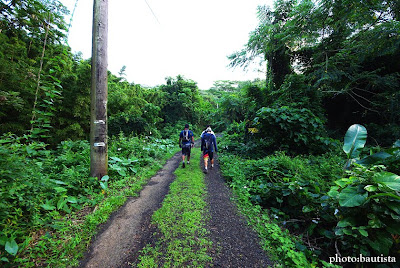 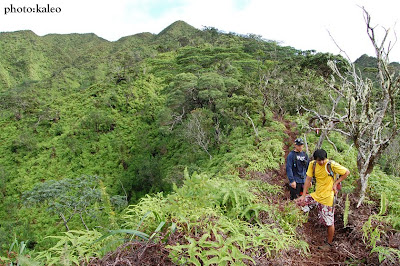 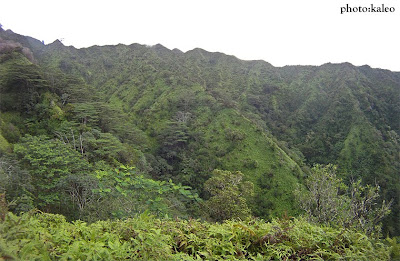 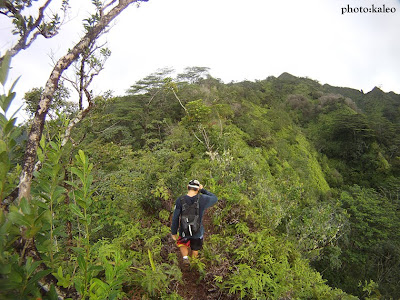 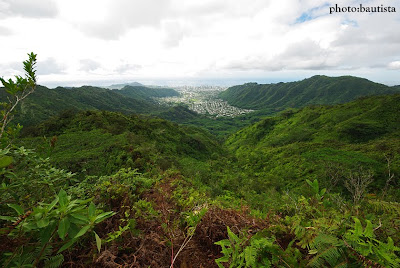 Looking back towards Manoa Valley and Honolulu.  (photo: B. Bautista) 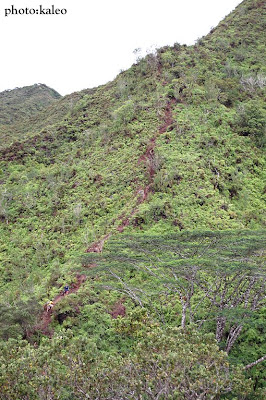 The last section before reaching the Ko'olau summit.  Notice the obvious swath.  And if you click on the picture, you can see Brian and Ryan at the bottom left of the photo. 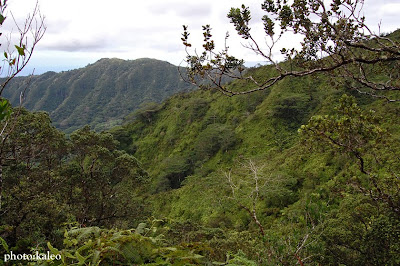 Pretty cool panorama at the summit taken with my camera phone. 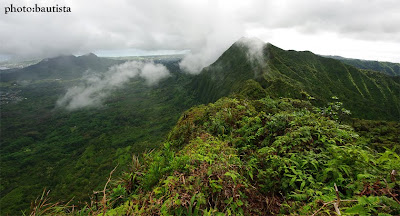 Looking towards Awa'awaloa.  (photo: B. Bautista) 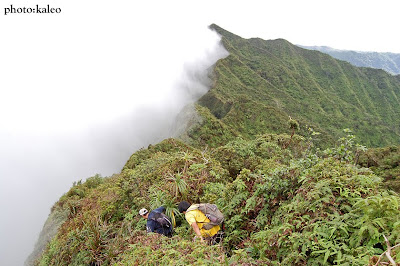 Starting the trek along the Ko'olau summit ridge toward Awa'awaloa. 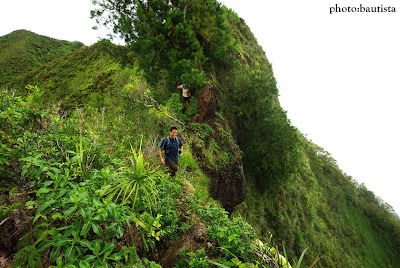 Keahi and I coming out from the ironwood grove.  (photo: B. Bautista) 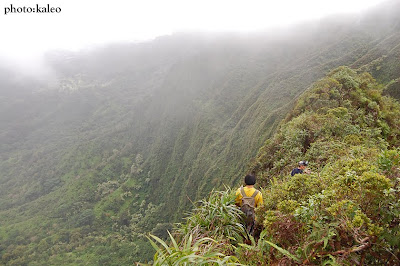 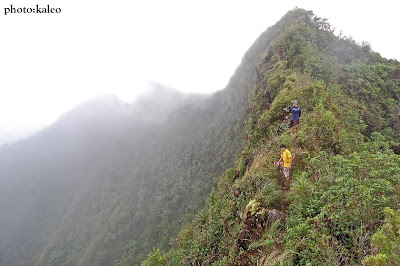 The ridge began to narrow as we approached Sedan Rock. 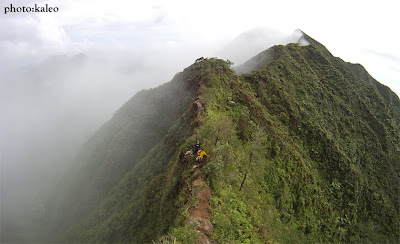 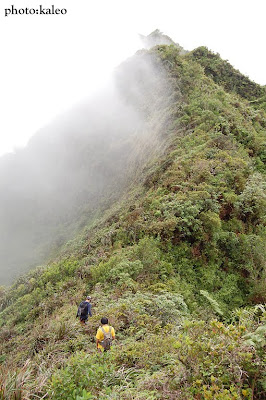 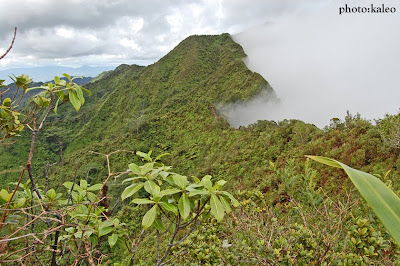 Looking back towards Konahuanui.

Looks like a nice trail. I'm going to have to check this one out.

I've been waiting to see a write-up on this trail, it's been very visible from upper Waahila for a few months now. I know you'd rather not post the trailhead location, but is access off the puu pia trail?

Great write up and photos! I can see the ridge from my house -gonna have to go and scope it out. Looks nice and challenging. Sweet tunes too!

Thanks for clarifying the name... Made for the ideal Chinese New Year hike. Mahalo :)

nice, i've only done the wa'ahila ridge to kolowalu, mount olympus is next and then maybe before our time ends here we'll attempt this :) glad you are hiking again, gives me something to read :)