A few days ago Brian Bautista, Ryan Chang, Daniel Napoleon and I did an exhausting loop in the Moanalua Valley area. It totaled about 11 miles and took us 8 hours. The route went like this:

Kamananui Valley Road is an old dirt road, complete with bridges, that heads all the way to the back of Moanalua Valley. We passed a bunch of people along the way: a boy scout group and a group of guys, one of them barefoot, doing Moanalua Middle Ridge to Haiku Staris. A little under an hour of walking on the road and we then took a left on the marked Kulana'ahane trail. The Kulana'ahane trail is a stream trail that crosses Kamananui Stream about 30 times until the last portion where hikers must ascend a semi-steep ridge to gain a saddle along the Ko'olau summit to reach a lookout. From the lookout is a nice view overlooking Haiku Valley and the H-3 freeway. Hikers usually turn around and head back the way they came in. Few opt to hike either side of the saddle.

From the saddle we turned left along the Ko'olau summit. The trail immediately gets narrow and dangerous. Precipitous drops into Haiku Valley on the right had us inching our way slowly and even crawling at times. A couple dips and hills and we finally encountered a section with no trail. From our vantage point we could see the short, yet steep climb to a higher point along the Ko'olau summit ridge. Brian and I grabbed our machetes and started whacking away. Reached a rock face with a tree on top of it. Used all our upper body strength to get past that part. Then commenced the bushwhacking. The grade seemed to steepen to our left, so we opted to edge to the right. It was a lot easier. Climbed up some grass and finally reached a level spot with awesome views into Moanalua Valley.

Up ahead I could see a group of four men descending above us. I yelled out at them and they responded with a yelp and shakas. Eventually we met up with the group at a steep eroded section that they just had roped off, which was perfect timing for them and us; they would drop down with the rope, and we'd climb up with their rope and detach the rope for them. Brian and I agreed that the rope wasn't necessary, but using it helped us climb the section faster and safer. The group we ran into had ascended Aiea Ridge the day before and camped out at the powerlines near the Ko'olau summit overnight. They had planned to reach the top out point of the Haiku Stairs, a pretty ambitious mission considering where they started from and that the climb out of Moanalua Valley's saddle to Haiku Stairs is downright mental. But we wished them luck, and told them they could bail out the way we came up on the Kamananui Stream trail. We untied their rope, and parted ways.

Above us the climb was more exposed. We edged to the left of a large washout, and began climbing steeply over loose dirt, crumbly rock, and low grass. Beneficial was the fact that the guys we ran into left a pretty good swath to follow on our way up. We scrambled our way to the top, holding and pulling onto grass to progress further. The grade of steepness eased and at a little past 12pm, we met up with the trail that followed the relatively level Ko'olau summit trail to our destination, Red Hill Ridge.

Again, the guys we ran into left behind a nice trail to follow, making our progress easier, however, it was still badly overgrown with lots of thimbleberry plants and uluhe. Reached a spot with a rope contouring to the leeward side of the ridge. The dirt was soft and very loose there. Shortly after we found ourselves at the terminus of Red Hill Ridge at about 1pm. Ate our lunches, hydrated, and began the trail down Red Hill.

Descending Red Hill Ridge was just as I remembered it: hot, lacking wind, and overgrown. The wind on the upper portion of Red Hill Ridge is often blocked off, making for sweaty hiking in the noontime heat. The views are spectacular, though: to the right is the H-3 freeway, and in the distance we could even see the Waianae Range. Two hours down Red Hill Ridge, and we finally reached the Godek-Jaskulski junction to head back down into Moanalua Valley.

The Godek-Jaskulski trail was in damn good shape because of the recent clearing three weeks ago by the HTMC. Great job on their part: it was easy going all the way down to the stream. By 4pm we were back at the road. Took the leisurely stroll on the road and reached our cars at 5pm. At our cars we saw the guys we ran into at their rope section. They told us they went up a ways toward Haiku Stairs along the other side of the saddle but decided to turn around. They thanked us, we thanked them, and then headed home. 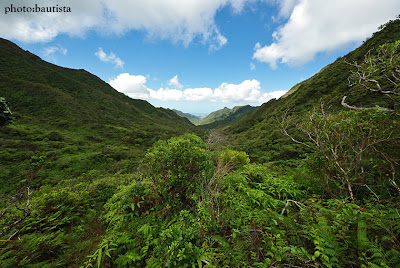 Around the 5 mile mark, looking back at Moanalua Valley.  (photo: B. Bautista) 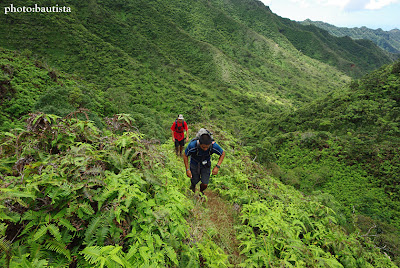 Short, minor ascent to the summit saddle.  (photo: B. Bautista) 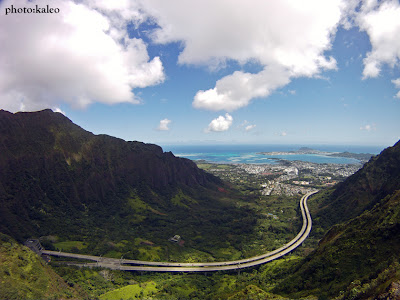 View of the H-3 freeway from the summit saddle, the endpoint of the Kulana'ahane trail. 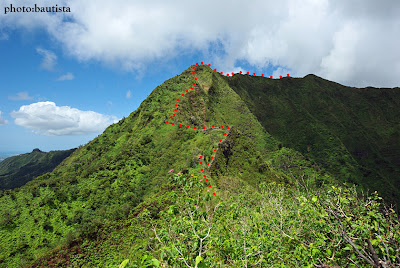 Looking north toward the route we would take (red dots) to intersect the terminus of Red Hill Ridge.  (photo: B. Bautista) 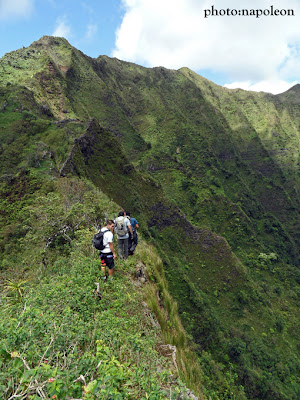 The trail becomes narrow immediately and forced us to edge along the ridge with large drops to our right.  (photo: D. Napoleon) 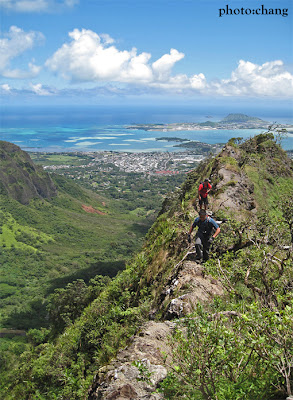 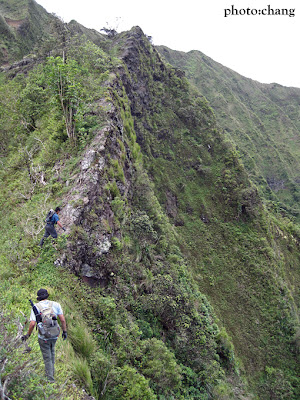 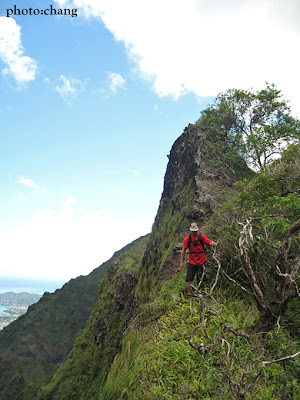 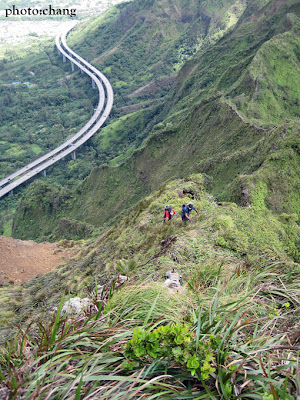 Some scrambling was involved to climb out of the saddle.  (photo: R. Chang) 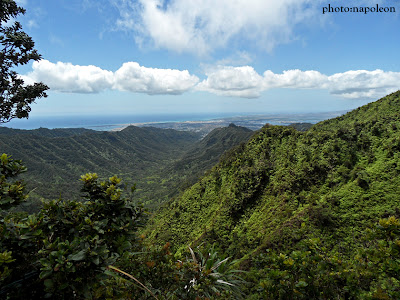 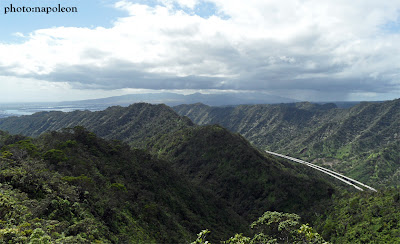 The view coming down Red Hill Ridge, with the H-3 freeway at the right side of the photo and the Waianae Mountain Range in the distance.  (photo: D. Napoleon)

I see you have a lot of followers (over a thousand visitors just today). Do you ever allow any of your blog followers the privilege of joining on any of your hikes?

I wonder if those guys you passed made it to Haiku Stairs!? that would be quite an accomplishment

i'd totally love to hike with him, although my slow ass would never keep up that's for sure :) i refer to him as my "hiking boyfriend" haha me and my friend joke about it all the time :)