This past Thursday before work I finally got to do a trail that had been in my sights for a quite a while. The trail was a short hike that led to Wailele Falls, a quaint waterfall located on the northeastern side of the island of Oahu. I had seen pictures of the waterfall but had no idea how to get there. The only clues I had access to was a random email I received from a guy named Alan Niwao. He told me where he started and attached a few pictures of the roads he hiked to get to the stream leading to Wailele. Although the pictures weren't much, it still led us in the right direction. A big mahalo to Alan for providing me with the info. Wailele Falls is classic.

Joining me on the hike was Daniel Napoleon, Kristen Jones, Ryan Chang, Brian Bautista, and Keith Mahon. We parked at Pounders Beach Park and headed to the Koloa Gulch trailhead. I followed what I remembered in the pictures Alan sent me and soon found ourselves on private farm lands. It was a bit sketchy. At times we hiked directly on the trails through cropland, keeping an eye out for anyone who spotted us. Running through my mind was the scene from the movie "The Beach" where a group of friends run into a massive farm of weed, only to find out their presence is unwelcome. Sadly, they get shot at by the farm owners, and one or two of them die. I can't remember. Anyway, we didn't die; no one was around to shoot us when we passed through the croplands. Lucky us.

Blindly following a maze of dirt roads, we passed more farmland heading deeper into the mountains. We finally hit a well defined trail that paralleled a lively stream. A half hour of criss-crossing and rock hopping along the unmarked stream trail, and there it was: Wailele Falls. The photos I had seen on the internet does no justice. Wailele Falls is truly something to witness in person. Despite its low height, it is still an awesome sight, with a very lovely open area to just sit down, relax, and hear the rushing mountain water cascading eight feet into a large, deep mountain pool perfect for swimming. As the sun shined, the bluest color I had ever seen of a fresh water mountain pool radiated from the pool's surface, amplifying an already surreal landscape. We took a dip, snapped some photos, and headed back quickly along the stream trail to make sure we'd make it back in time for work.

The hike back was faster. We ended up following a road -- still passing farmlands -- all the way to Kamehameha Highway. I believe the dirt road we followed on our way back is the correct route; it only took us about fifty minutes to get back to our cars compared to the hour-and-a-half it took from the Koloa Gulch trailhead. Starting from the Koloa Gulch trailhead turns out be just a big mess.

Wailele Falls is definitely worth checking out again. In fact, I may be back there in several weeks to explore upstream. From what I saw, the trail keeps going deeper into the mountains. And from what I've heard, there's an even bigger waterfall about four miles in. We'll see. For now, I'm just glad I know where it is. 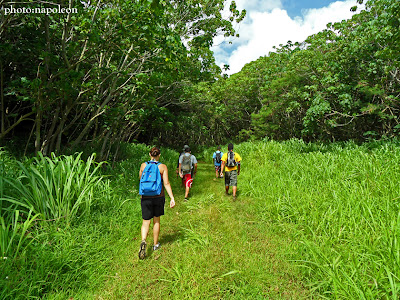 Following one of the roads, not knowing where it leads to.  (photo: D. Napoleon) 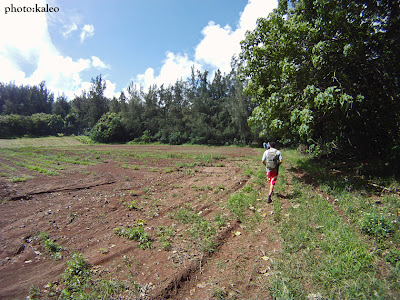 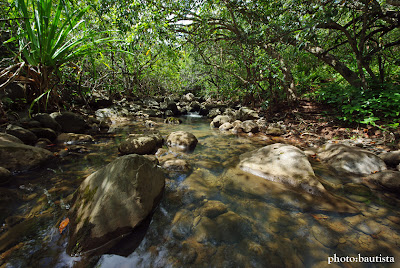 Finally at the stream.  (photo: B. Bautista) 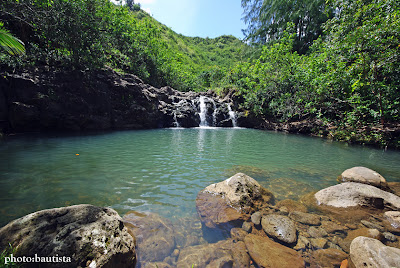 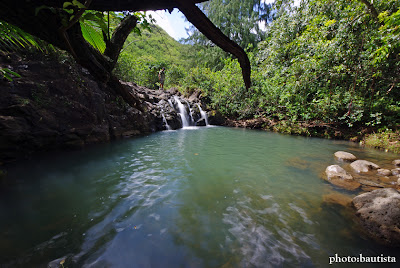 Hey kaleo. That looks like a great hike and waterfall. Do you think you can give any hints on where to go once you get to koloa gulch trailhead. I would love to be able to find this waterfall.

Looks so fun and easy to get to. I'd love to head up there for my birthday in a few weeks. Can you give some pointers for an easier route in? islandgirlnalani (AT) hotmail.com
Mahalo

Hi Kaleo, this looks like an awesome hike, thanks for sharing. I was wondering i you wouldn't mind sharing more details about where to go, i've look all around in google maps to find a way but had no success. I understand the importance of keeping it a secret and would promise to keep it that way. You can email me at rluis99@hotmai.com. Thanks again for sharing this hike

Aloha Kaleo,
After reading your write up on Wailele falls and seeing the amazing pictures I decided to search the web in an attempt to find more information on directions to the trail/falls. However, I did not receive a whole lot of information, in fact I still have nothing. I would really love to see falls, due to the fact that it might just be one of the only waterfall's on Oahu that is still not ruined by man. So could you please email me some info about the hike at lekehutc1@gmail.com? It would be greatly appreciated!
Mahalo!