The rain poured yesterday, so I asked Shanoah and Chase if they wanted to hike Kalauao Valley to get to its waterfall. Kalauao Valley is located in Aiea Heights and the trail to Kalauao Valley starts at the Aiea Loop trailhead. There's a left junction that veers off the Aiea Loop Trail. After walking about half a mile we ended at a gate in a residential area, so we backtracked and found the trail that lead down to the stream on the left. There were ribbons tied to trees, indicating that it was indeed the trail. The hill was extremely steep and muddy, but there were plenty of roots and branches to hold on to on the way down. After the hill, we ended up at Kalauao Stream. Kalauao Stream and Falls is dependant on rain, and it must've rained in the valley a lot the night before because the stream was rushing and knee deep in some parts. More ribbons helped us find our way. The trail zig-zagged in and out of the stream, and we had to get our shoes wet. The water shoes Chase and I wore were put to the test, and they drained water extremely well. Shanoah's shoes on the other hand were plain hiking shoes with no drainage holes. Hiking up the stream trail was easy; it was level and well trodden. We eventually reached Kalauao Falls, and it was gushing in all its glory. It's a pretty nice waterfall, but the water was really brown and the swimming pool did not look inviting at all. We hiked upstream about a mile and decided to turn back. Going up the hill we came from was the meanest workout ever. It's been a day since I hiked the trail, and my legs still feel weird and jellowy. I wanted to take more pictures, but my lens kept fogging up from the humidity and I didn't want to get my camera wet because it was really wet in the valley. I also got a few pictures with a new fish eye lens I bought. I'll remember not to use it on the shutter function; most of the pictures were blurry along the edges, but they came out decent. Kalauao is a very cool hike. It's different from any other hike we've done. If you ever plan on going, do not go when it hasn't rained: the stream and waterfall will be completely dry. This hike took us around five hours to complete -- probably because we spent so much time cruising at the waterfall. 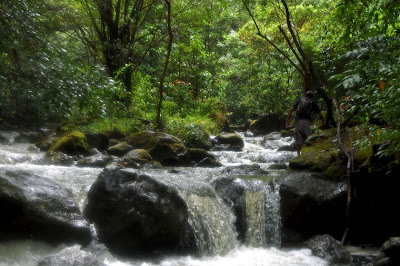 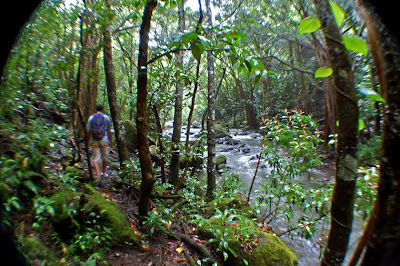 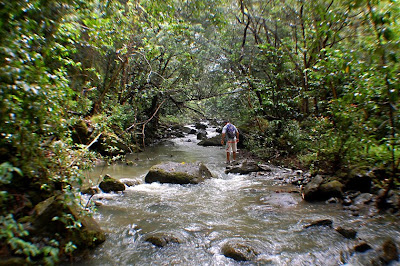 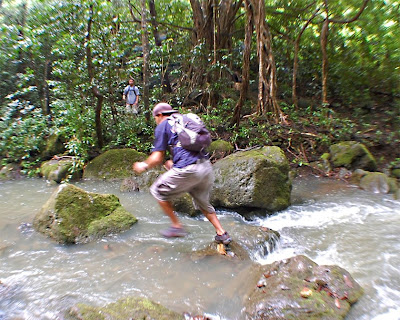 Shanoah, rock hopping, desperately trying to keep his shoes dry. He eventually had to get his shoes wet. 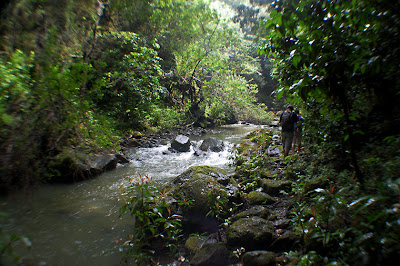 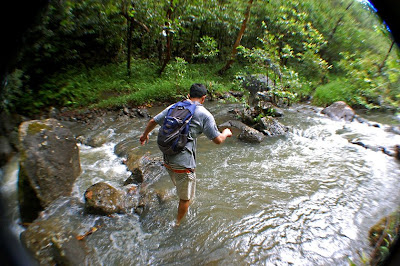 Chase, crossing the stream to continue the trail on the other side. 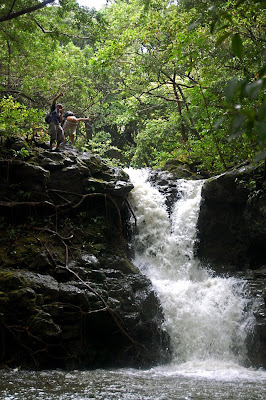 Shanoah and Chase at the top of Kalauao Falls. Just like the Nu'uanu Trail, Chase decided to fuck the shot up with his ass. 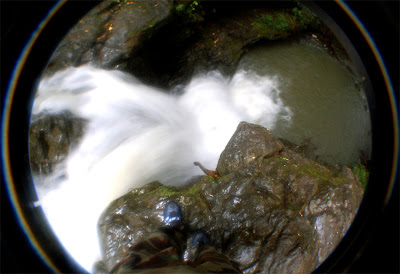 Me at the top of the waterfall. 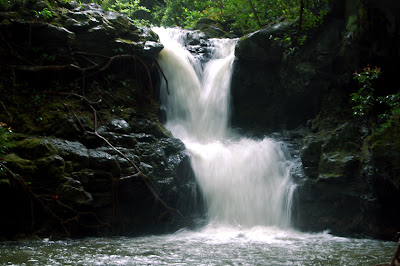 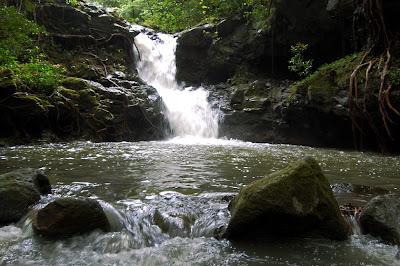 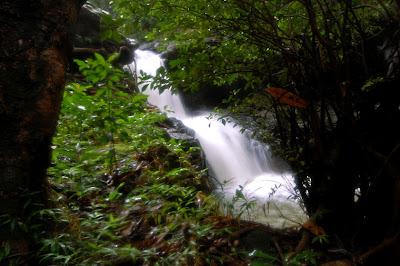 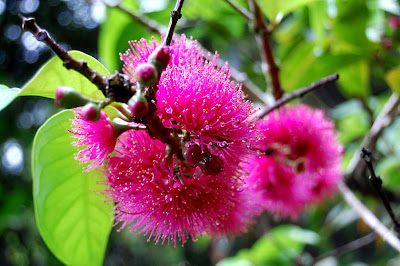 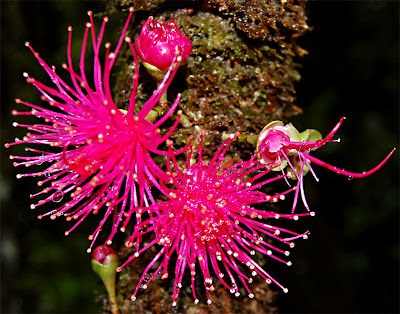 Such a cool plant. This shot looks like it's being taken underwater. It kinda resembles a sea urchin or something. Pretty mean.

Sunday February 22 2009. Today there was a plastic shopping bag tied to the mango tree branch on the ridge so we can find the trail. Thanks for the hiking stick halfway down the stream run off. Lots of ti leaf, lauae and blooming ohia lehua. Trail is pretty dry--not muddy today.