Now this was a hike. The views were unreal after only less than half an hour of walking, and the views would stay that way all the way to Waimanalo. I'm pretty pissed though. Our intent was to descend into Waimanalo via the TomTom trail, but Basil and I didn't get to reach the TomTom trail because we couldn't find it, so we turned around and spotted two guys and a van at the hang glider launch pad and caught a ride back to the Makapu'u lookout. More about the van ride back later. I'll start at the beginning of our hike.

After parking at the lookout, we walked across the street and headed uphill. The trail was indistinct at first, but we eventually found ribbons left by past hikers that led us to the ridgeline. From there we got a pretty good view of Makapu'u lighthouse and beach, and Rabbit Island.

The trail was very dry and rugged. There were lots of kiawe bushes to throw caution to, and rarely any shade to escape the sun. The trail did its fair share of rollercoastering while hugging the edge of the ridge with a load of 1,000 foot drops on the eastern side of the ridge. Bottom line -- one slip and you die; nothing to hold on to but air.

We ate lunch in a shaded area with pine trees and proceeded to find the TomTom trail on the Ko'olau summit ridge. We went pretty far and then turned around thinking that the trail didn't even exist because the summit trail was ascending, not descending, and all we could see were vertical cliffs into Waimanalo; there were no signs of any ridge descent, so we turned back.

We came upon a van with two guys drinking beer at the terminus of a paved road that leads to a hang glider launch pad. They offered us a ride back to the Makapu'u lookout and even offered us a few beers. The driver, Pirate Dave, lived out of his van, and his pal, Dino, was a crew member for "Lost." The two of them were stoned out of their minds, with almost a twelve back of Budweiser in their systems. I can't begin to tell you how classic these two guys were, but you had to be there to know what I'm talking about. Super classic local-haole guys. After almost getting into a ton of major accidents on the ride to the lookout, we finally reached our car, shook hands with Pirate Dave and Dino, and headed home.

I hate not completing a hike. I found out later that the TomTom trail was actually a lot farther than we had expected, so we really did have to hike up the summit trail. Now it gives me an excuse to do it again. 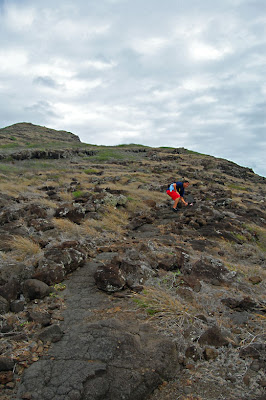 Here's Basil, finding our first ribbon at the beginning of the hike. 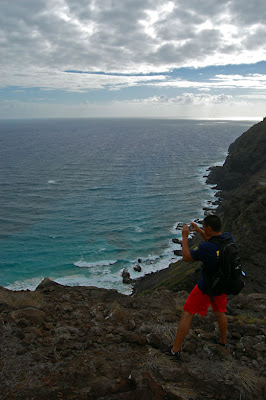 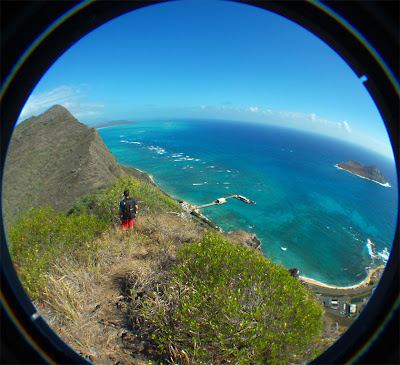 Rabbit Island on the right. Straight ahead is the ridgeline we had to hike all the way to Waimanalo. 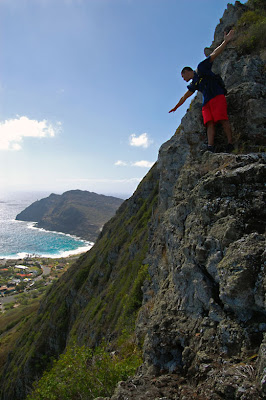 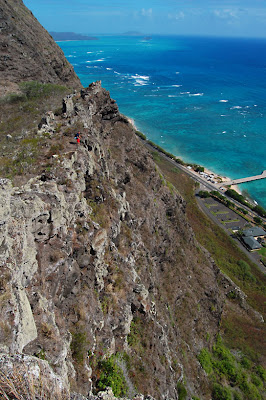 Definitely do not fall! Basil makes sure his feet stay in place. 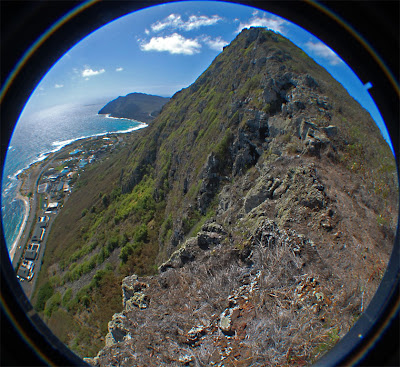 Yep. You gotta walk that rocky ridge. Here I am looking back. 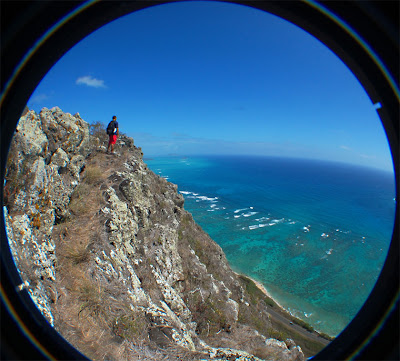 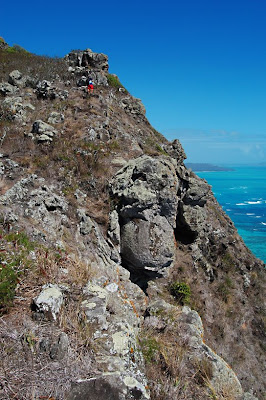 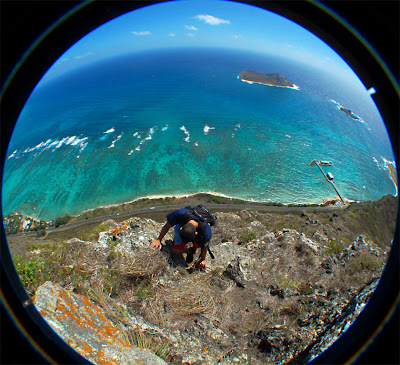 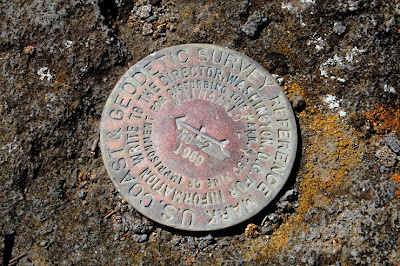 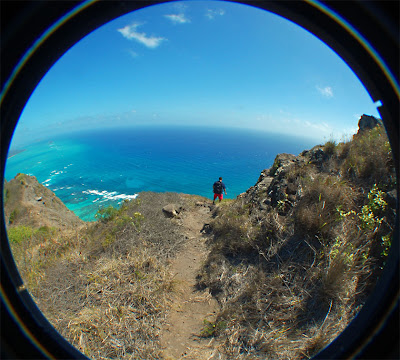 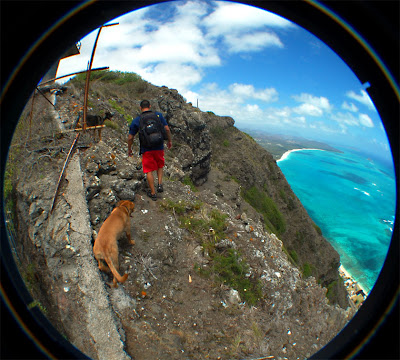 Two friendly dogs we ran into along the ridge near some abandoned missle sites. Some hardcore hiking dogs. 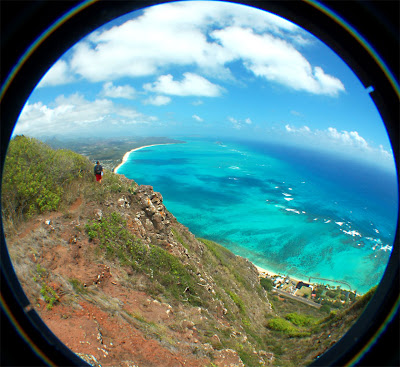 The ocean was so ridculously blue. 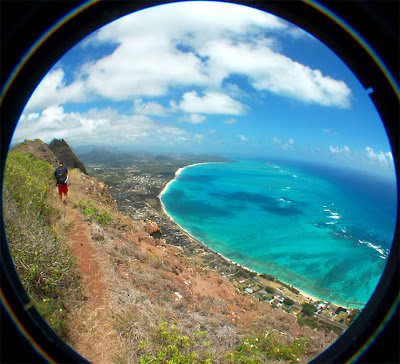 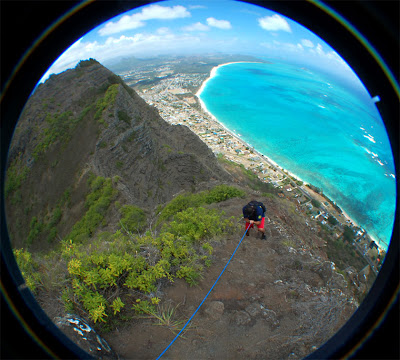 Big rope section. Not really needed for the descent, but it's more necessary for the climb back up. 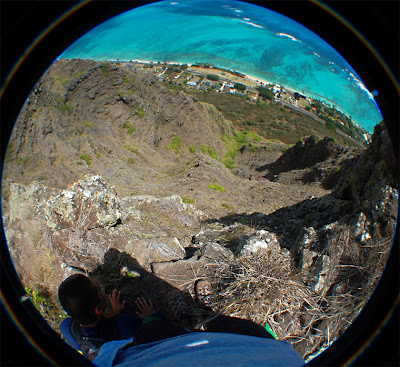 Peering over the edge of the scariest drop on the hike. 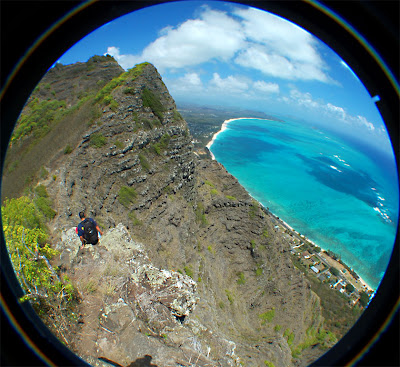 Crawl, don't walk. That drop is no fucking joke. 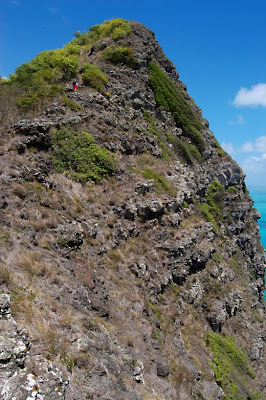 Climbing up the 2nd to the last hill. 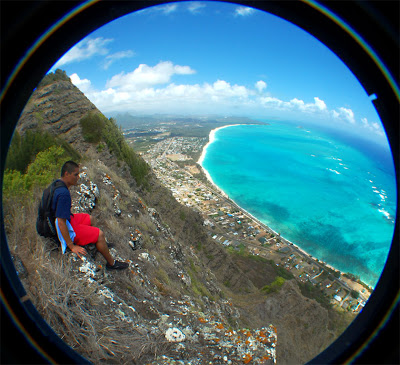 BasilExit8, jk, but yeah son it's was fucking amazing-amazingly tiring at the same time...fuck, that was a long hike bu. Can't wait to do it again. Also, I love you BROTHA

ribbons left by HTMC fwiw like today we did the trail again
tomtom descends from the pole at the top of the ridge, kinda obvious
gotta climb up the rock though where the pole is
if you made the trees, really not that further