My plans to hike always change, and this past weekend was no exception. Although I scouted Manana Ridge last weekend in hopes of doing it this past weekend, the weather did not cooperate, and I was forced to do something other than a summit hike. I even had second thoughts about doing Manana earlier in the week. My friend Kelven was on his way to Hawaii from California, and he had his sights set for climbing the highest mountain in the Ko'olau Mountain Range: Konahuanui. Climbing Konahuanui from Mount Olympus sounded great, but a brutal metal concert the night before our Sunday hike left Kelven with a fat right foot and unable to tackle the steep hills that Konahuanui has in store. So much for that idea; plus, it was raining anyway.

The abundance of rain set my attention on Kaipapa'u Gulch. This particular gulch has a waterfall that only flows after a nice downpour. I woke up at 6am on Sunday morning and did a quick internet search about the length of the hike and where the trailhead was located. The Hawaiian Trail Mountain Club claims the hike to be a total of eight miles. We set out to find if this was true using Chase's new digital mile counter.

Kevlen, Chase, and I made it to the trailhead at the end of Kawaipuna Street in Hau'ula around 9:30am and started up the paved private road around 9:45am. The trail initially passes a large water tank that is sprayed with graffiti. Soon after the trail gradually climbs and then gradually descends into Kaipapa'u Gulch. The trail is said to be closed, but it was well marked and easy to follow. It didn't take us long to reach the dry, boulder-laden stream bed. The trail weaves in and out of the stream many times with large, open areas suitable for camping in between. Again, the trail was well marked with numbers conveniently written on the ribbons indicating the number of times we crossed the stream.

At around the 20th stream crossing and two miles in we finally saw signs of the stream flowing. As we headed deeper in the gulch the mountain walls on both sides began to come closer together, and the stream was fuller and more audible in the distance. From here the trail was very faint in some parts, and getting our feet wet while crossing the knee deep stream was inevitable.

The gulch walls were vertical at times, and at one point along the hike we got a major scare that had us thinking about turning around. As we hugged the trail on the right side we heard some rustling high above us to the left side of the stream. The sound began to get louder and we thought it was animal running toward us. Instead, a huge boulder careened off the vertical mountain face into the stream below. The boulder made a huge splash, and our hearts were pounding. If we had been on the left side of the stream, that boulder drop would have proved fatal for one, if not all, of us. With the tragic memory of the Sacred Falls of 1999 in mind, we thought about turning around. The eeriness of the trail was getting to us, and the thought of "we shouldn't be here" rang in our ears. However, we somehow gathered the courage to continue our trek upstream.

Kaipapa'u Gulch reminded me of the Koloa Gulch hike I did two months ago; some sections seemed almost identical. However, Kaipapa'u Gulch reigns as having the most mosquitoes I have ever encountered on a hike, and large ones at that. The abundance of mosquitoes is probably due to the stagnant water pools during periods of low rainfall. In any case, if you decide to do this hike, cover up, and bring mosquito repellent.

After the 30th stream crossing and over four miles in, it became evident that the trail was well over the eight mile HTMC count. The trail was so long that we thought we might not make it back before sunset, but after about the 40th crossing we could finally hear the heavy splash of water around a right corner.

There stood Kaipapa'u Falls in all its glory: 90 feet high, a deep swimming pool at the the waterfall's base, and ironically, no mosquitoes. As for the length: Chase clocked the trail from our cars to the waterfall at 4.9 miles; a ten mile waterfall hike. The length, the mosquito bites, and the fallen boulder were all forgotten as we sat down and photographed the waterfall. We took a dip into the cool swimming pool. We dried off, ate our lunch, and took even more photographs. Had i known this hike was a total of ten miles I probably wouldn't have done it. Ten miles to see a waterfall that might not be flowing? Uh-uh. No way. But the stars aligned pretty well for us on this one, and it's one hike that I'll probably never do again. We rested for a good hour and headed back at 2pm; we reached our cars at 4pm. I never imagined doing a six hour, ten mile waterfall hike, but it was all worth it. 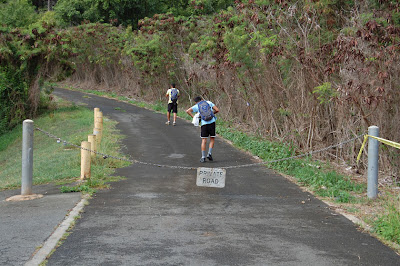 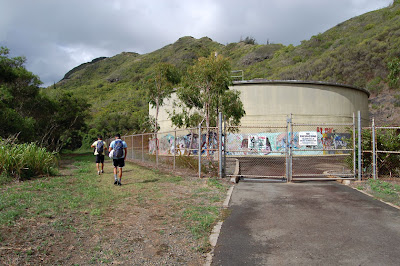 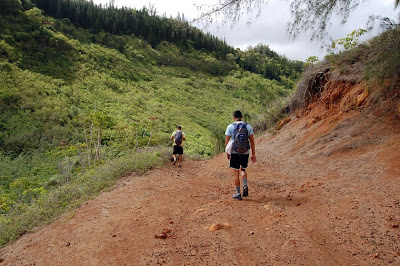 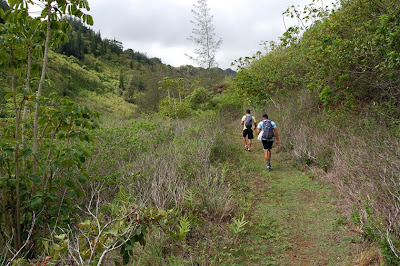 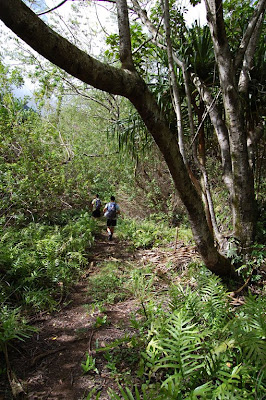 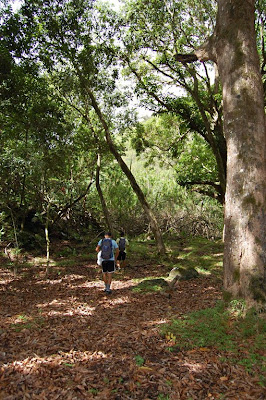 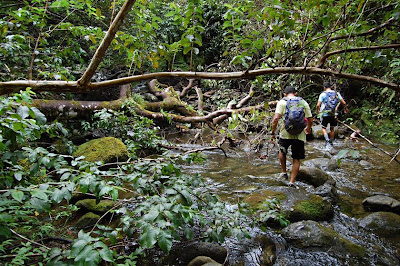 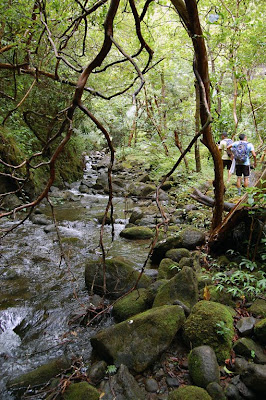 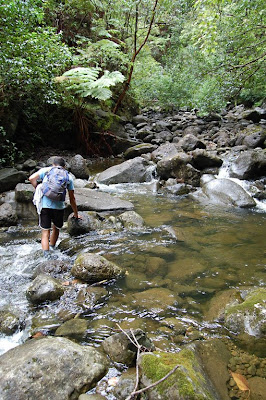 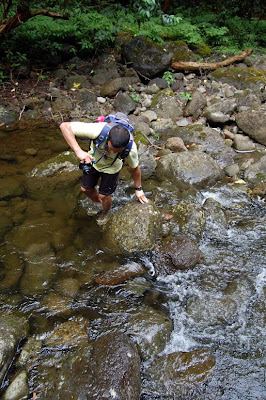 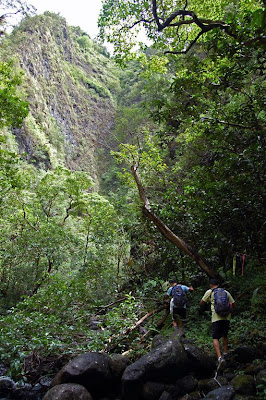 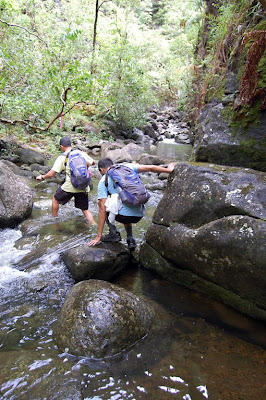 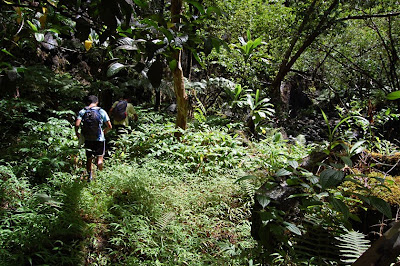 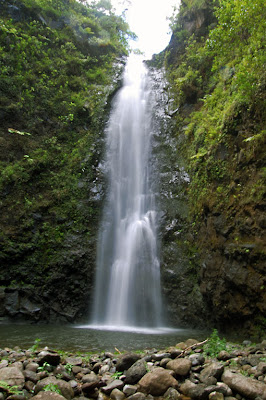 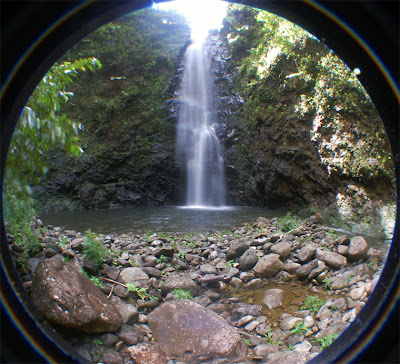 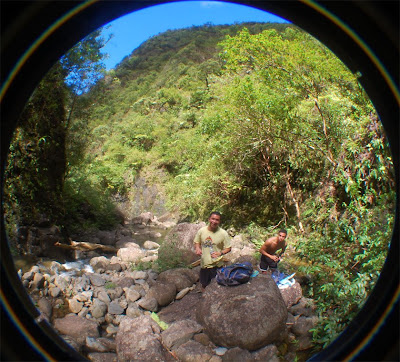 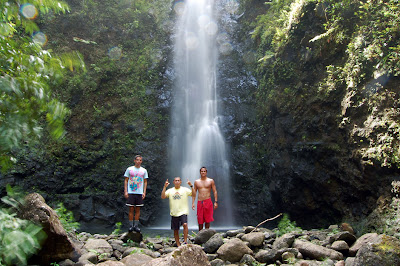 The useful self-timer photo feature. Left to right: Kelven, Chase, and me. 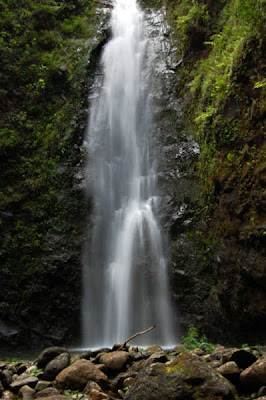 I would love to do this that's a spectacular waterfall! I'm not sure I have the guts tho.

Did this hike on a whim from the advice of a local high school teacher today, 22 September '13. Was an excellent hike and no falling rocks or high water. Found your blog to figure out where I actually went. Went in about the same time of day and out as well. Great post!