The Waianae Kai trail was a great introduction to the various trails around Waianae Valley for Chase and me. There are many trails in the valley; some are used by hunters, and several have been recently pioneered by a man who calls himself Waianae Steve. The trails Steve traiblazed are very well-marked and defined, and if one gets lost, finding his orange trail markers affixed to trees will direct the hiker back out to the Board Of Water Supply road that eventually meets back up at the trailhead. Some of the trails he pioneered are Waianae Ramble, Star Trek, and Tiki Ridge. The Star Trek Trail, in my opinion, is his crowning achievement, where one climbs up an impossible looking cliff to the Waianae summit ridge just short of Pu'u Kalena.

We arrived at the dirt parking lot at the end of Waianae Valley Road and began trekking past a locked gate at 9:30am. Beyond the gate is a one mile paved road that is used by the Board of Water Supply. The road initially passes a water tank on the left with a view of massive Kamaileunu Ridge dead ahead. Chase and I eyed the ridge of Kamaileunu and shuddered at the fact that we were up there just several weeks ago. That ridge hike will forever be burned in our memories – pun intended. The gradual ascent up the paved road soon passes two fenced in water wells. The paved road then exterminates at a covered picnic table and continues on a dirt road into the valley. Getting to the picnic table from our car took about half an hour, giving us a good warm up of what lied ahead. After about five minutes of hiking on the dirt road, we reached the lush valley.

Our goal on this day was an unnamed peak on Kamaileunu Ridge just shy of Pu'u Kawiwi. To get there we took a steep, heavily used trail to a lookout known as Three Poles. The three poles are actually utility poles, and at this lookout one can take a junction that follows a steep ridge trail to the top of Mount Ka'ala, the highest mountain on Oahu. We debated on whether we should climb to Ka’ala, but I had a rendezvous at 5pm, so we opted to turn away from the Mount Ka’ala junction and head toward the No Name Peak instead. Waianae-Ka’ala will have to wait.

On our way to the peak with Makaha Valley on our left side and Waianae Valley on our right, we encountered a fence that has been installed to protect native plants and endangered species in Makaha Valley from wild boars. The fence degraded the hike as it cut directly into the narrow ridge en route to No Name Peak. We scrambled up and over huge tiki-like boulders and scaled a couple vertical sections with the aid of ropes, signifying that someone had done the trail before. The trail also weaved in and out of the fence line, so we had to climb over the fence a couple times to regain the trail. As we neared the top, the trail became less defined.

We finally reached the top of No Name Peak at 1:00pm. It was very overgrown with dry grass, taking on an uncomfortable setting for a lunch spot, so we headed back to some rocks along the ridge to sit and eat, enjoying the strong breeze and snapping some photos with our cameras. The breeze was so strong in fact that I almost fell off the ridge while taking pictures. After a short rest, we headed back down the ridge at 1:30pm to a junction with Kumaipo Trail, a trail that has been used since the days of early Hawaiians. This trail was not very steep, but it did get us down to the valley floor faster than going up to Three Poles. Before we knew it, we were back at the Board of Water Supply road heading back to our car.

The weather was perfect for a west side hike. The tradewinds were strong and cool, and although the sun was beaming for the majority of the hike, it wasn't blazing. In addition, the valley trail was heavily shaded, making for relatively pleasant walking all the way to Three Poles. From the lookout of No Name Peak we could see the route to Pu'u Kawiwi. The trail looks nuts! We spotted a very narrow, zigzag section just before climbing to the summit of Kawiwi. I hope to try that section out one day. For starters, though, this was a great hike: super good workout and a good way to gain knowledge of the many junctions that make up the trails in Waianae Valley. We arrived back at our car at 3:15pm; fifteen minutes shy of a six hour hike. 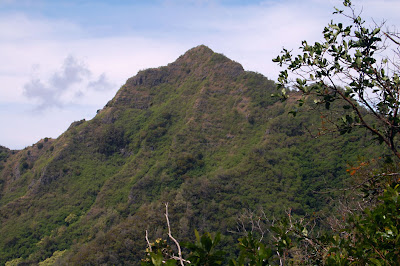 Here's a picture of the unnamed peak we were aiming to summit at. Elevation at the top is about 3,000 feet. 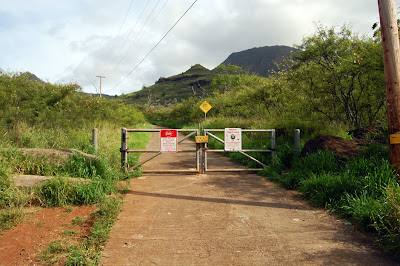 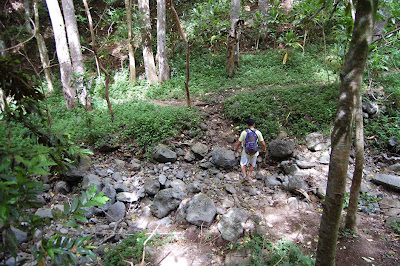 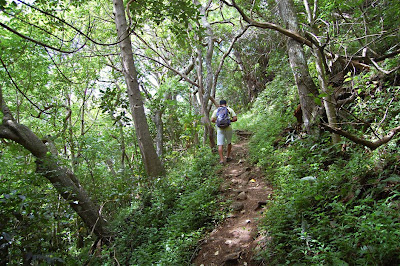 Climbing out of one of the two gullies. 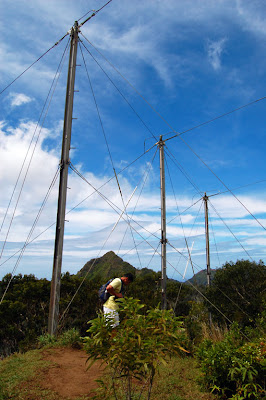 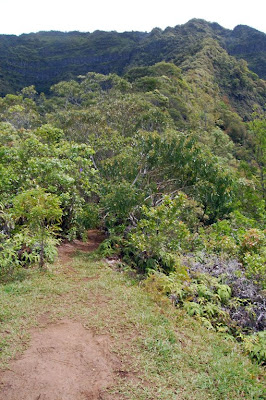 Here's the trail climbing up to the top of Mount Ka'ala. 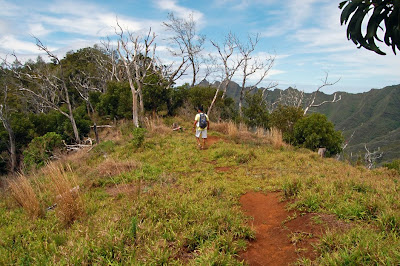 Exposed, level section along the ridge to No Name Peak. 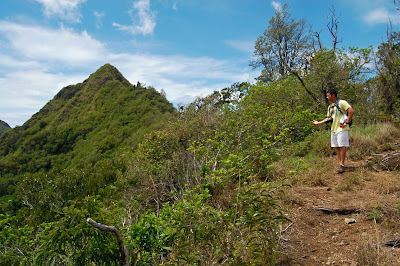 Almost there. No Name Peak in the distance. 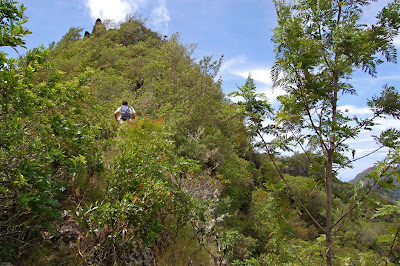 The narrow ridge was heavily vegetated, masking the drops on both sides. 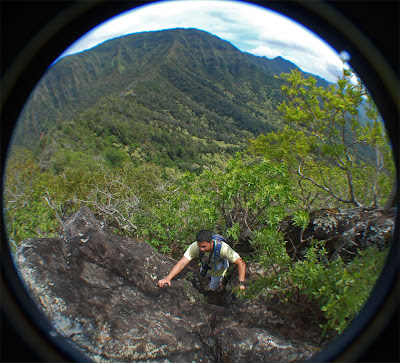 Climbing up the first rock face. 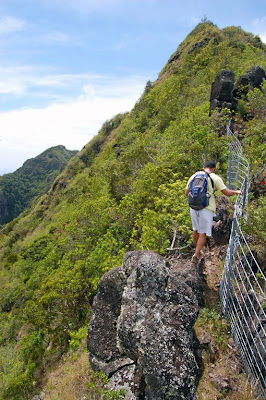 There's that annoying fence on the way to the peak. 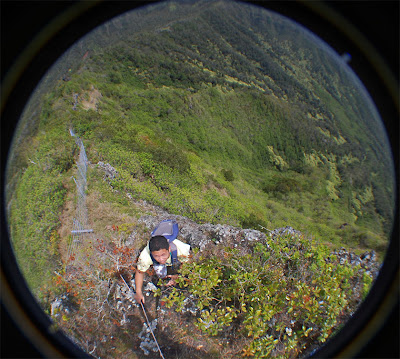 And here's the last vertical rock section to the peak with the aid of a rope. 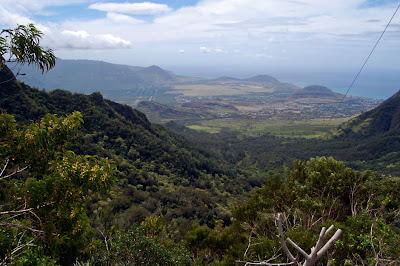 The view from Three Poles. 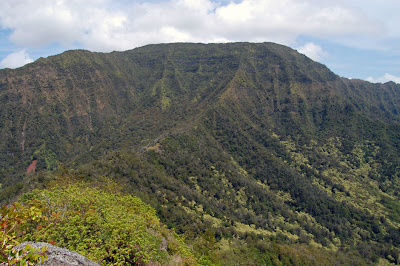 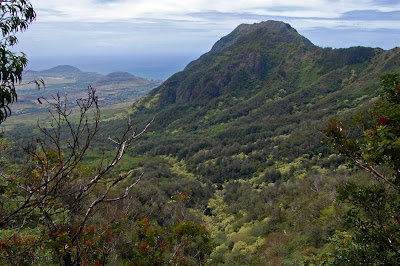 View of Pu'u Kawiwi and Kamaileunu from Kamaileunu Ridge on the way to No Name Peak. 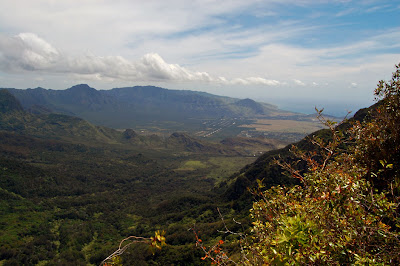 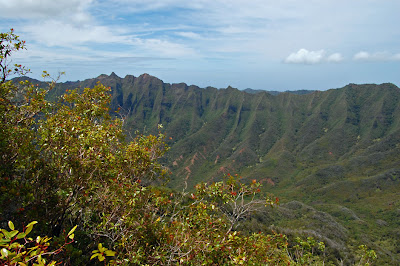 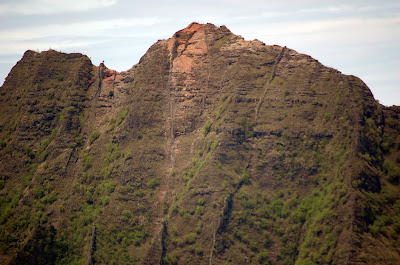 Chase's view of Kea'au Ridge through his 200mm lens. Check out those narrow dikes reeling off the side of the ridge. (photo: C. Maglangit) 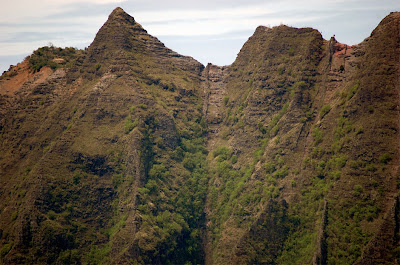 Another view of Kea'au Ridge, with the pyramidal Pu'u Ohikilolo. If you look closely, there's a house situated at the bottom left of the peak. Who would build a house and live up there? (photo: C. Maglangit) 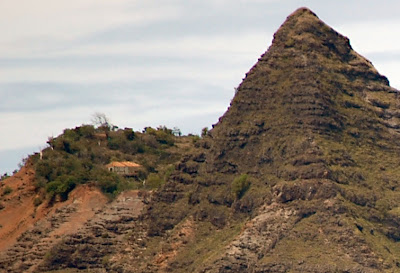 Here's a closeup of the house. (photo: C. Maglangit)

The "house" by Ohikilolo is probably some stageing site for the Army Environmental people who put up the fences.

September 5, 2010-we climbed to the foot of the final approach to Mt. Kaala today then turned back...rain coming in and it didn't see prudent. It is truly awesome up there, rather scary the closer you get to the top. Very steep! Your pics of the hike are awesome. Thanks, Marvin

Hi,
You have a great blog! The pics are beautiful and the descriptions are really helpful. My friend and I are going to try this hike on Sunday.
~Lori