Sunday was the third time I made it to the top of Pu'u Kalena. It's one of those rare trails that tests your stamina and courage at the same time. You would think that climbing Oahu's second highest peak would take a decent amount of mileage, but it doesn't; Kalena stands around 3,500 feet, with challenging ascents, descents, and narrow ridges all clumped into six miles of trail. It is definitely the top five most dangerous treks on the island.

Marky and Kelsey joined me on Sunday's hike, and I commend them for their bravery throughout the nightmarish sections along the trail. For those who have not been on a trail like Kalena before, it takes a lot to gather yourself and walk on what seems like a ridge as thin as a gymnast's balance beam. But Marky and Kelsey took it nice and slow and made it to the top. Good job, guys!

There's not much I want to say about the hike. I've written about it before. This outing on Kalena was just really cold and windy. Plus, I took my GoPro camera and got some out of this world footage of Kalena's side ridge. I also don't have much pictures because I forgot my battery at home for my Nikon camera. But the GoPro is capable of taking still shots, so I got the chance to snap a few to post on the blog. One thing I'd like to note is that there is now a sign at the trailhead indicating that there is no hiking allowed. While climbing up, we could see a military police officer in the dirt parking lot watching us climb up the first section of the mountain. It wasn't like he was going to do anything, but I wonder if they patrol the trails to Kalena and Hapapa now. I don't know, but we didn't get caught; that's the main thing.

This will probably my last hike to Kalena for a while. For some reason, the route back is extremely taxing for me, and I despise it. And the side ridge half way through the hike is the last time I'm trekking it; it's fricken dangerous! I just did it to get footage and to make it to the green ribbon I tied to a tree the last time I did the ridge. Any other attempts to trek the ridge could seal my fate, so I'm leaving it alone. I do have my sights set on Hapapa in around two weeks, though. We'll see how the GoPro fares on that ridge. 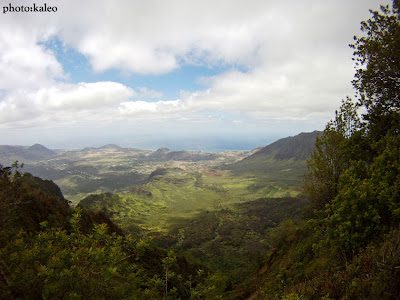 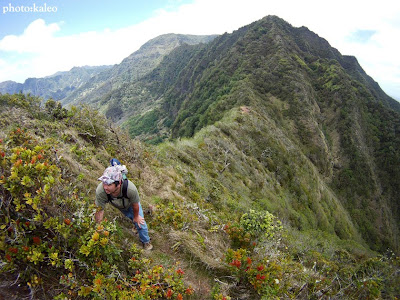 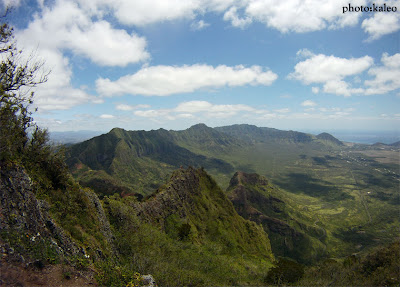 I almost had a heart attack just watching those videos. Incredible!

We arrived at the gate without car insurance, then went to manamana. Perhaps we will go to Kalena this friday.

Anytime I want to sweat and get the heart rate up while just sitting in a chair, I go and check out your videos. . . wow!!!