The Ka'au Crater loop trail is a unique hike. Aside from reaching two waterfalls and climbing a third waterfall, the trail circles a little-known crater nestled right below the Ko'olau summit. The ascent along Ka'au Crater's east rim to the summit is steep, as is the descent along the vegetated west rim. In between is a short walk along the Ko'olau summit ridge with views overlooking a good portion of the windward side. The route is cleared and hiked by the Hawaiian Trail and Mountain Club once a year.

Six people joined me on the trail this past Sunday: Mark, Rio, Bret, Troy, Christina, and Albert. We started off at around 8:30am and reached the first waterfall in about 40 minutes. The 40 minutes are spent following a contour trail below the crest of Palolo Middle Ridge.

After reaching the top of the third waterfall, we continued along the crater's east rim to the Ko'olau summit. The ascent was steep over crumbly rock and dirt. Ropes are anchored in many eroded spots, and we took extra caution, for the wind was nuking along exposed portions of the ridge. Further up, the trail reaches a couple of false peaks until finally topping out with a view of the windward side. Dead ahead is Mount Olomana and the Mokulua Islands. Much of the view to the northeast is obscured by Konahuanui, the highest peaks in the Ko'olau mountain range. Looking to the southeast is the town of Waimanalo and Rabbit Island in the distance.

A twenty minute lunch reenergized our will to continue along the summit ridge and meet up with a route along the crater's west rim. As with all walks along the Ko'olau summit ridge, the feeling was exhilirating. The drop to the east was very obvious, but the trail stayed true to the crest, allowing us to enjoy the walk rather than be afraid of it. We eventually passed two massive powerline poles. Just past the second powerline is the junction that descends along the west rim of Ka'au Crater.

Ka'au Crater's west rim is choked with vegetation, primarily uluhe ferns. If you ever plan on hiking this portion of trail, bring long pants. The trail is slippery, muddy, and steep in some spots, and all of us had our fair share of spills along the ridge.

Before we knew, we were at another powerline. After a short break, we proceeded to find the junction that would follow the crest of Palolo Middle Ridge and back down to the contour trail we had initially started on. We passed several hikers along Palolo Middle Ridge, all looking exhausted from hiking up the ridge. For us, going down seemed a lot easier than it would have been going up. After about 30 minutes we finally reached the contour trail. Another 20 minutes of hiking familiar portions of the stream and we were back to the cars.

The whole loop took about five hours to complete. It's a great loop: awesome workout, nice views, three waterfalls along the way, and a view of a once active volcanic crater. You could not ask for anything more. The only thing that downplays the hike are those utility poles. Other than that the trail is definitely a must do if you've lived on the island your whole life. Directions to the trail and more pictures can be found by visiting the following link: http://kaleolancaster.blogspot.com/2009/04/kaau-crater-april-10-2009.html. 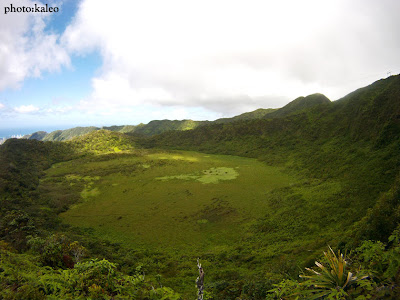 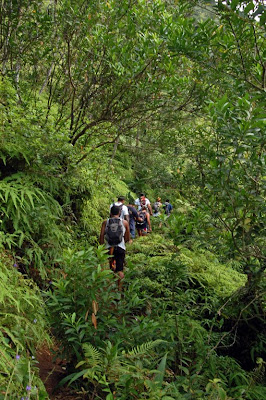 On our way to the waterfalls.  (photo: M. Seto) 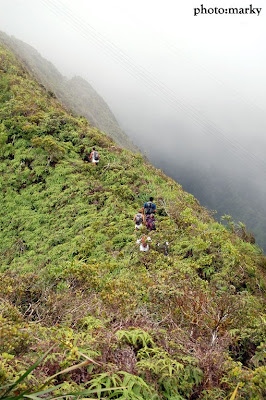 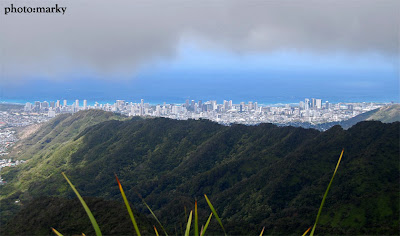 View of Waikiki from the summit ridge.  (photo: M. Seto) 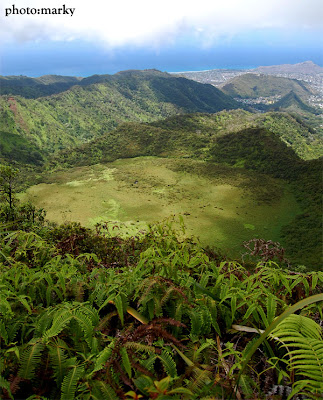 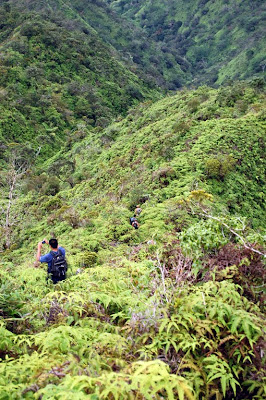 Hiking down the vegetated west ridge of the crater.  (photo: M. Seto) 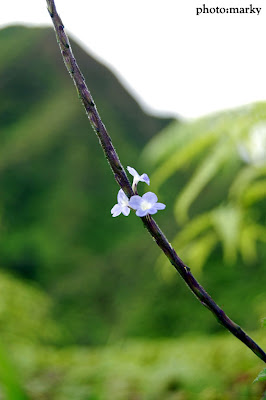 My first visit to Ka'au Crater was this past weekend. I did it kinda backwards - I went up the ridge trail, and then down the waterfall. The waterfall part of the trail is amazing, I had so much fun.

Wanted to report that I was not able to make it to the summit via the eastern rim. The long, steep rope climb near the top has been so eroded, I couldn't find any viable footholds.