Manana to Waimano reigns as the longest and toughest trail I've ever done. The massive loop hike connects two of the longest state trails on Oahu: Manana Ridge (6 miles) and Waimano Ridge (7.2 miles). The 1.5 mile section along the Ko'olau Summit Trail (KST) that connects each trail's terminus is a brutal trek through head high vegatation along a ridge that seems to undulate forever. While it encompasses every dangerous trait a trail could ask for, the top out on Pu'u Eleao (elev. 2,654ft.) to the south of the Manana terminus is a memorable experience.

I've completed a bunch of loop trails around the island. Much of the loop trails require a jaunt along the Ko'olau summit, but this trail along the summit was different. The majority of loop hikes I've done are located in the "town" portion of the island. Wailupe, Pu'u O Kona, and Kulepeamoa are just a few of those loop hikes. But what the aformentioned loop hikes have is what the section between Manana and Waimano does not: a well-defined trail. The entire summit section from Nu'uanu Valley to Makapu'u is the most hiked summit portion in the Ko'olau's. The trails that exist along this portion are very popular: Mount Olympus, Wiliwilinui, Hawaii Loa Ridge, Kuli'ou'ou Ridge, Kamiloiki. The summit section from Pupukea to Moanalua Valley is rarely ever hiked; the section between Manana to Waimano lies in this summit section.

The two people crazy enough to complete the loop with me was Mark and Kristina. We got off to an early 7am start by meeting at the Waimano trailhead at the top of Waimano Home Road just before the guard station. Mark parked his truck, we jumped in Kristina's SUV, and headed to the Manana trailhead at the end of Komo Mai Drive in Pacific Palisades. The morning weather was horrible. Rain pelted down on us and the summit was completely socked in.

We pushed off at exactly 8am and reached the covered picnic table in around half an hour. The rain was coming hard this time, and the clouds looked to be getting thicker. I had actually thought about turning around at this point, for I had never hiked in such bad weather since doing Lanihuli in May 2009. Mark assured that we'd be alright, so we donned our rain gear and headed further up the trail.

At about the three mile mark the trail began to get really muddy, rain still falling, hampering our hopes for a view at the top. As we reached the second helipad, the rain stopped, and the clouds actually thinned out a bit, but the summit was still clouded over. At this point I was getting a bit irritated with the weather; I really wanted to see the view at the top.

Further up the trail narrows to a point where we could see deep into the bowels of Manana Valley on the left and Waimano Valley on the right. Both streams were flowing well because of the rain. Waterfalls on each side were noticeable but only trickling.

At around 12:45pm, we reached the Manana Ridge terminus. Mark and I brought along some MRE's for lunch. There's nothing better than a warm meatball marinara meal deep the mountains. Fine dining if you ask me. While we ate our lunches, the clouds cleared from the entire Ko'olau summit, offering unbelievable views of the windward side. I was so suprised and elated, for I thought we were going to hike to Waimano in whiteout conditions.

We set off along the summit trail around 1:30pm to the direction of Waimano. The trail was relatively clear to Pu'u Eleao, a higher peak just to the right of the Manana terminus. Along the way, Mark and I fixed ribbons to branches. After a short walk from the Manana terminus, we reached Pu'u Eleao. Eleao is quite a place. There is a wide grassy meadow in the shape of a bowl, with the wind blasting through the blades of grass. As we walked across the meadow to a view point we could see the Waianae Range and Pearl City in the distance. It was cold, 65 degrees on Kristina's thermometer, and the wind was nuking. The wind was so strong in fact that Kristina's rain poncho flew out of her pack, flying high above us in the wind currents, eventually landing in the valley below. It was a crappy poncho anyway, and the weather looked promising for the remainder of the hike.

From Eleao we went further along a ridge that caused some alert. The ridge was heading us in the wrong direction. I knew that we had to stick to the summit crest, so Mark blazed a trail downslope from the ridge we were on to the summit ridge. We followed him. On this slope we found remnants of a crashed airplane. We marked our progress downslope with ribbons and finally reached the summit crest again.

Now at the summit crest, I noticed that the trail was non-existent. The ridge narrowed to about a foot, with a huge 2,000 foot drop to our left into Waihe'e Valley, and a sizeable drop on the right. The vegetation was thick, and progress was slow. I had intended to get as much video and still-shot footage as possible, but I was so tired that I put my camera gear away. The video footage does no justice to what we had to go through. Hill after overgrown hill, we pushed along the summit crest just inches away from death. At one point it was 3:30pm, and I had no idea how much longer it was to the Waimano trail terminus. I looked at the topo map, and our location was almost exactly in between Pu'u Eleao and the Waimano trail. We had been hiking for two hours along the summit, and it was taking a toll on all of us. My legs were cramping, my eyes were filled with debris, and climbing each hill turned into crawling. We were so exhausted.

We reached the top of a hill when all of a sudden we noticed a wide swath coming down from the hill along the summit crest. And sure enough, we could see the "End of Waimano Trail" sign in the distance. It was 4pm when we reached the Waimano trail terminus, and we were so relieved. The view was great. Spread out in front of us was the massive green valley of Waihe'e. We munched on some snacks to boost our energy for the easy seven-and-a-half miles back along the Waimano trail to Mark's truck.

The Waimano trail is beautiful and very easy going. It's just really, really long. At some point we lost the correct junction to get back to Mark's truck. I don't know what happened, but I was alerted once more at our dire situation. We had hiked for a good two hours down Waimano, but we were going nowhere. Instead, we found ourselves following a trail at the bottom of the valley, crossing Waimano stream twice and ending up at a covered picnic shelter. From the picnic shelter I spotted two trails: one headed back towards the mountains, and one headed out of the valley. Of course we chose the trail heading out of the valley. But still, after another hour of hiking we found ourselves at a dead end. There was a signed junction that indicated a service trail, so we followed it. It was 7pm now, and the sun was going down fast. Kristina took out her GPS and we could see that we were close to a road, and the trail that we were on headed directly to it. Once we reached the road we could tell that we were on private property. Abandoned houses lined the right side of the roadway. Further down the road we saw a building that is the headquarters for the Department of Land and Natural Resources. A car was coming down the road as well. I signaled for it to stop and a man rolled down his window. I asked him where the guard station was and he told us to just follow the road down. Thanks for not giving us a ride, buddy. It was a long way, but we eventually made it to the guard station and Mark's truck at exactly 7:30pm.

Without a doubt, this was the hike of a lifetime. The trail up Manana and down Waimano wasn't bad at all, it's the 1.5 miles and 2.5 hours along the KST that did it to us. Physically and mentally, this was the hardest endeavor I had to endure in my life so far. I'm not scared of heights, but that section along the summit put me in my place for a bit. I've never crawled on ridges, but I did on this hike. Eleven-and-a-half hours on the trail; fifteen miles. We made a day hike on a loop trail that should've been a one-night backpacking excursion. I still can't believe it. I'll stay true to my promise that I will never do the loop again. Mark and Kristina would agree. It's one of those hikes that changes your whole outlook on hiking itself. I speak for myself and my hiking companions: after this one, no trail will ever be the same. 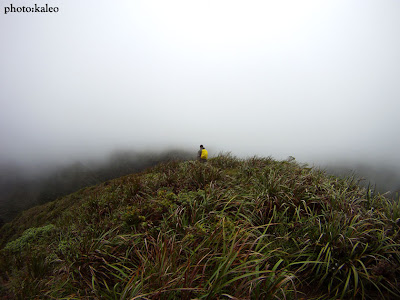 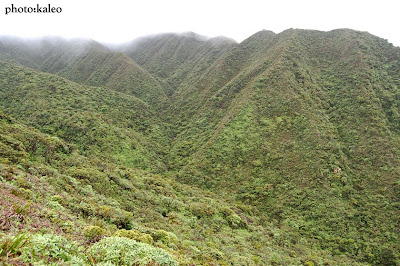 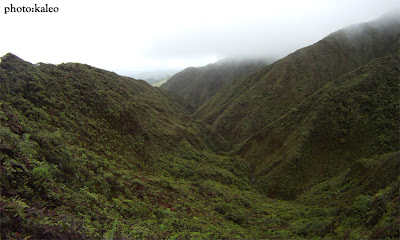 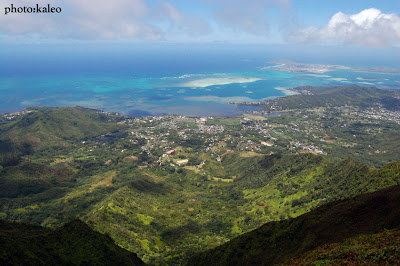 The view at the top of Manana Ridge. 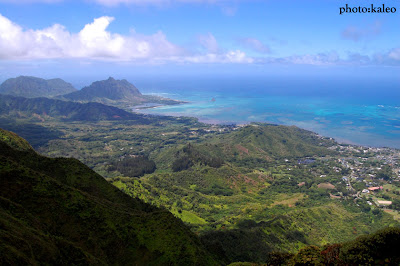 Looking toward Kahalu'u, Waiahole, and Kualoa. 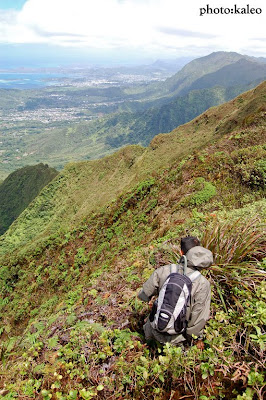 On the Ko'olau Summit Trail. 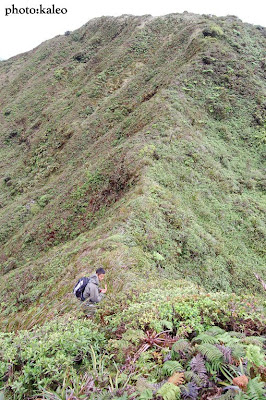 Kristina making grass angels atop Pu'u Eleao in the meadow. 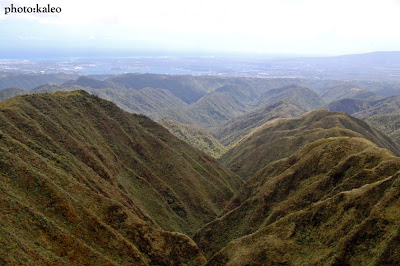 The view from across the meadow looking to the southwest. 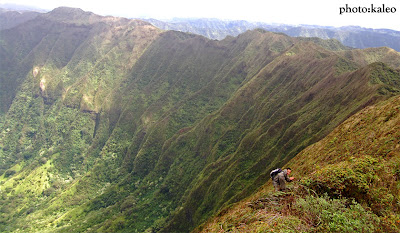 Edging around the rim of Waihe'e Valley. 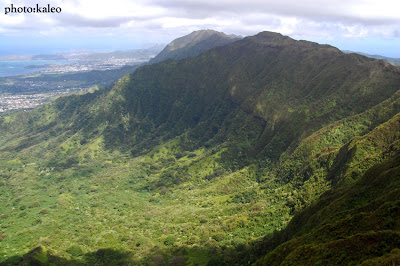 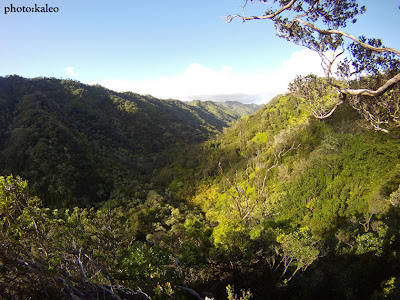 Awesome trail Kaleo. Sounds like you guys were a bit knackered once you got back, eh?

an amazing feat! Props to you & your hiking buddies. What program do you use to edit your videos?

Wow, you do some cool hikes! I used to hike when I was young and recently got back into it. I've been trying to get into more extreme hikes. I'd love to join you and your buddies for one some time. :)

Nice one! You should try the Olympus to Konahuanui loop. It took us 4.5 hours to traverse 1.6 miles on the KST with parts that made kalena look like pre-school.

thanks for the heads up andrew! i've had that route on my mind for quite some time now. one day. one day...

this trail looks intense, but beautiful, haha they usually come hand in hand huh. well props to you guys!

I went maybe and hour past the covered picknic table then thought to myself, where the heck am I going :D wish there was more tape past the last trail sign saying that is not maintained beyond this point"

Great job though, I will try again! :D