My first official hike on the continental United States took place in the lush and desolate Grand Canyon North Rim in Arizona. My lodging accommodations were in a quaint and rustic lodge in the scarcely populated town of Kaibab. Situated in the far northwest of Arizona, Kaibab receives massive amounts of snowfall each winter. In fact, last winter the town received twenty-two feet of snow. Because of the weather, the area is closed to visitors from the end of October through May. The roads are not snow-plowed during the winter, making it impossible to reach Kaibab without quads.

Five miles south of the lodge we stayed in is the entrance to the north rim of Grand Canyon National Park. Compared to the south rim, the north rim of the Grand Canyon receives less visitors per year and is closed during the winter season. The park has many trails that cater to all levels of hiking. From half-mile strolls to three-day backpack excursions, the park is a hikers' dream. Hell, it's even possible to hike 200-plus miles from the north rim to the south rim!

After doing some research, I wanted to hike a trail that was easy and relatively short. The 5-mile round trip Cape Final trail sparked my interest because the trail itself was forty-four miles from the headquarters of the park. The further from civilization the better.

The drive to the Cape Final trail is on a narrow, winding road. En route we passed several lookouts, all of which offered views from different vantage points along the canyon. A small dirt parking lot is situated at the beginning of the trailhead. After parking we headed into the forest on an old dirt road. The vegetation here is dominated by tall ponderosa pine trees. Eventually the road turned into a trail, and at this point we caught our first glimpse of the canyon at a lookout. After snapping some photos we proceeded further.

Our end point terminated at a broad, exposed ledge at an elevation of about 8,000 feet. The view was out of this world! At the bottom of the canyon was the Colorado River. Far off in the distance was the snow-capped peak of Mount Humphreys. Razor-thin ridges protruded majestically from the canyon floor. The afternoon sun at our back bathed the textured canvas of sheer cliffs: reds, oranges, maroons, pinks, peaches, and lush greens from nearby vegetation all contrasted with the blue sky. Breathtaking is an understatement.

In summary, the Grand Canyon is something that must be viewed once in your lifetime. The magnitude of the canyon is mind boggling. The only possible way of seeing the canyon from end to end is to take a space shuttle into space. At two billion years old, it is an ancient natural wonder. This time of year was probably the perfect time of year to go. The summer is usually hot, but around the Fall season, the weather rarely gets past 75 degrees Fahrenheit in elevations about 6,000 feet. During the night and early mornings, the weather dropped to 35 degrees Fahrenheit. Weather like that is a shock to Oahu locals, and my lips paid a major price for my only three days of sightseeing; they were chapped big time. Our lodge was also very cozy. With no television and cell phone reception, it made the experience a bit more rustic. The lodge was heated, there was warm water to shower, there was a little seasonal gas station and shop across the street, as well as a main lodge next to ours that served up food from 7am to 10pm. Life was good. I will definitely be back one day to hike into the canyon. That will have to wait. 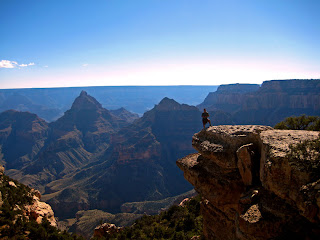 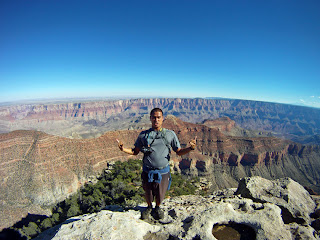 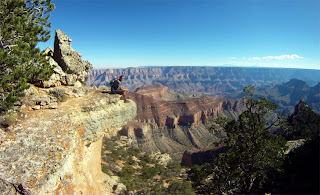 very nice, I did a flight over the Grand Canyon years ago building my twin flight hours. hiking it must be awesome

Everything about the North Rim is amazing.