I'm not going to sugar-coat anything about the hike we did this past Sunday. I'll just get straight to the point: Bear Claw is one fucked up trail. It is by far the scariest hike I've completed, and the most challenging. Aside from the physical demand this hike entails, it's the mental aspect that makes this hike different from any other trail I've done on Oahu. It encompasses everything that makes an Oahu ridge trail scary, multiplied by ten. Self-agility and the self-ability to make good decisions to progress further are put to the test, solidifying Bear Claw as one of the most dangerous trails on the island.

Bear Claw tops out at about 2,100 feet on the Ko'olau summit between the terminus of Kuli'ou'ou and Pu'u O Kona. The route climbs over 2,000 feet in a little under a mile! There are two ways to climb Bear Claw: one is from the left ridge, the other is from the right ridge. I, along with Keith Mahon, Brian Bautista, and Nate Rubio, decided to ascend the left ridge. Before the hike, Nate had emailed Andrew Bayang for directions to the start of the trail. Andrew, along with Jeremy Kreis and Jason Antolin, completed the hike this past September. (You can read about Andrew's account of the hike by clicking here. You can also read up on Nathan Yuen's account of the right ridge by clicking this link.

The route began walking on a road, passing croplands and eventually crossing over a large ranch. According to our directions, we were to locate a watertank. From there we'd follow a trail, passing two powerline towers along the way. We had no idea where the watertank was, but thanks to Nate's satellite GPS we were able to locate it. On the left side of the watertank was an obvious trail that headed uphill. Eventually we hit two powerline clearings, indicating we were on the right track.

Beyond the powerlines the trail's steepness increased, and we were confronted with our first rock face. The climb was minor, but looking skyward we could see that the climb ahead was no joke.

We then hit a second near-vertical rock face. The section was tricky. Hand and foot had to be meticulously placed for proper grip. Evidence that someone had climbed the rock face before was obvious when we spotted two old metal poles sticking out of cracks in the rock. These metal poles were especially handy for the climb up the rock face, for it was perfect to grasp with our hands and push up with our feet. At the top of the rock face was another metal pole. Nate and I decided to fix a rope so Keith and Brian could have an easier time climbing up than we did.

As we pushed further the trail disappeared and we soon found ourselves pushing through heavy vegetation. The majority of trees were very strong; other trees were weak and would break with the slightest pull. The strength of the trees were doubly important when we encountered the third rock face. I inspected the steepness and spotted a relatively safe route that would climb up on the right and then contour left and upward. Easier said than done. Lots of the trees gave way, and much of the rock was rotten and crumbly. Somehow we all managed to get to the top of the rock face, and beyond was an all out battle between man and vegetation.

The steepness of the ridge did not let up. Trees slowed our progress tremendously, and at times we found ourselves crawling on our knees and hands to get under branches. Our eyes were set on the level ironwood grove above.

To my amazement we encountered our first ribbon. It was a fresh pink ribbon affixed to a branch that I assume was tied by Nate Yuen and his gang when they hiked up the right ridge a couple weeks prior. The ribbon was an apt location to be tied to because it indicated where the right and left ridge join.

We finally reached the ironwood grove. Beyond, the summit beckoned within a half mile. However, the real test lay ahead. The ridge narrowed to mind boggling proportions. Not only that, but we could see that climbing rock faces was not over.

Dike after dike, crumbly rock face after crumbly rock face, we inched our way slowly past the most perilous sections. The drops on either side would prove deadly if we fell. There was no room for error. Especially gut wrenching was the final 30-foot climb to attain the summit. Nate, Keith, Brian, and I agreed: it was the longest 30-foot climb of our lives. To put the climb in perspective: imagine climbing up a steep 30-foot hill with nothing to hold on to but loose grass and dirt. The dirt feels soft with every touch of the hand and push of the foot. You're sliding. You're digging your fingers into the dirt. You feel the gust of winds at your back that are flowing up and over the mountain. All of this is happening on a five-foot wide ridge with a massive drop on the right, and a relatively safer drop on the left. Although, the trail hugs the very right edge of the ridge, so if you fall, you will fall to the right. A nightmare, to say the least.

I made it to the top first and let out a relieved shout of accomplishment while I watched Nate climb up next. Keith followed suit and made it to the top as well and plopped himself face first, lying down in the dirt, relieved that it was over, his adrenaline flowing like mad. And finally, Brian brought up the rear and reached the summit without incident. We high fived, found a lunch spot, ate, and then headed down the Kuli'ou'ou Ridge state trail.

I'd like to thank Nate Yuen and Andrew Bayang for the information we gathered from them to tackle this monster hike. Without them, this post would not have been possible. If you are planning to attempt this hike, there are few things I'd like to point out. First off, park a car at the Kuli'ou'ou Ridge trailhead. Then drive to Waimanalo and park another car there. You can of course go up Bear Claw and come back down, but coming down would be a bitch. I recommend going up and over. Secondly, getting to the watertank involves a bit of trespassing. There is a large ranch to hike through, and we were lucky to not have run into anyone along the way. Thirdly, there is not a single rope installed along the entire trail. With that said, rope is essential. Nate brought along some rope, and we used it on the second rock face. It is no longer there because we untied it. Fourth, the rock along this ridge is some of the most brittle I've ever seen. Each step and each grab must be tested in the worst spots. One slip, and it's over. There is no room for error. And fifth, a small shovel would be of great use for the last forty feet to the summit. With a shovel, hand and foot holds can be dug out into the dirt for added traction and security. A rope would definitely help, too, but there is nothing to anchor it from the top (e.g. tree). Pounding a metal stake or piton to secure the rope to would work. If you have the stamina and guts, try it. We ribboned a good portion to the ironwood grove. After that it's just a narrow trek to the Ko'olau summit. Good luck. 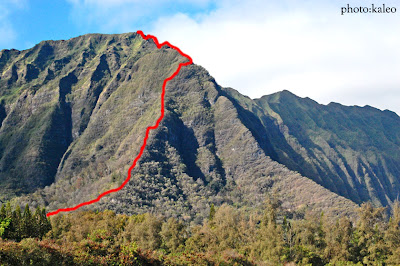 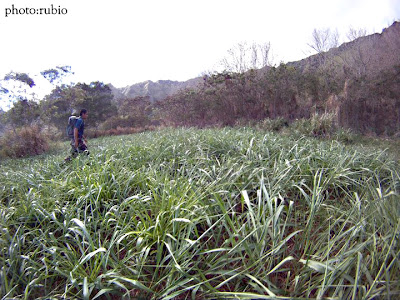 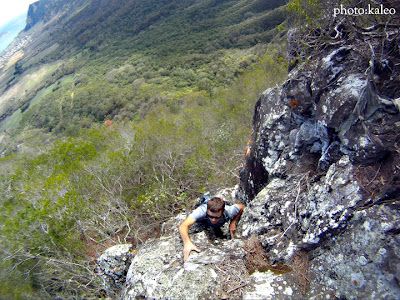 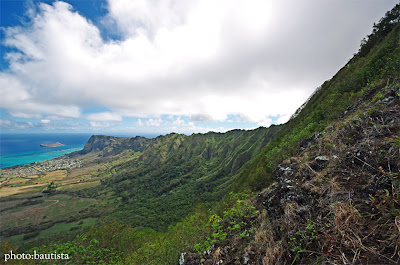 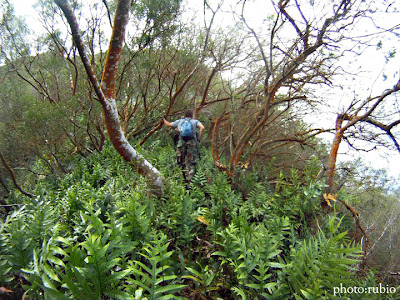 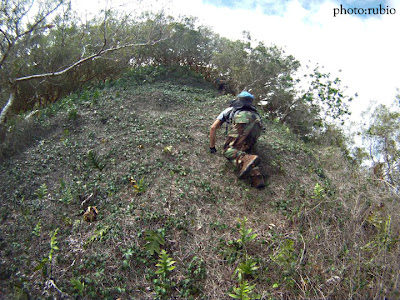 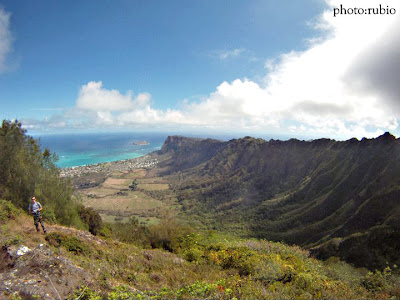 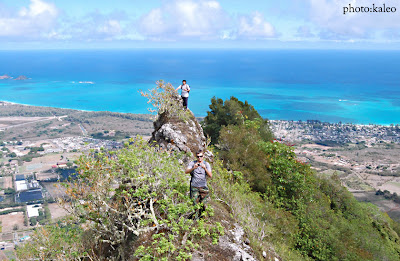 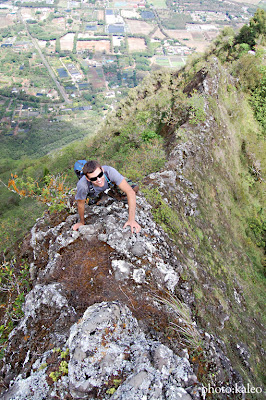 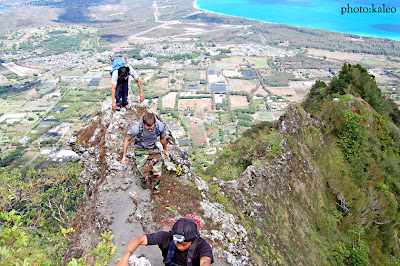 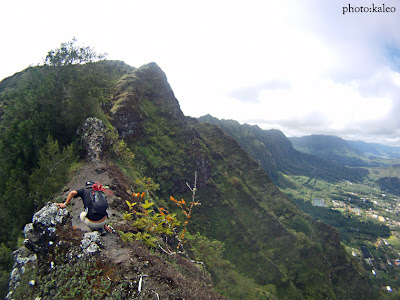 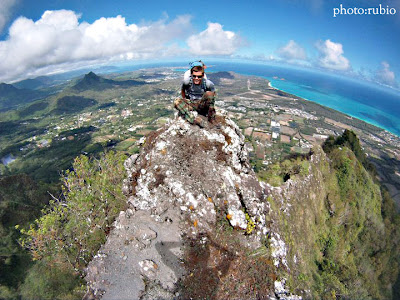 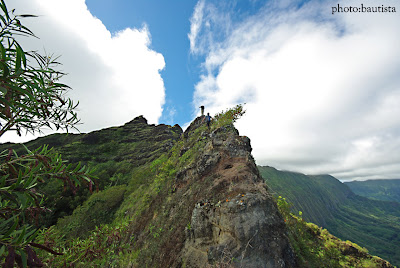 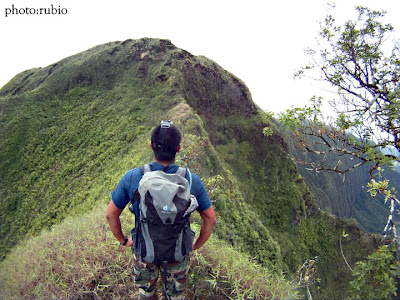 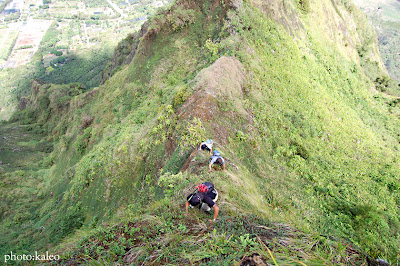 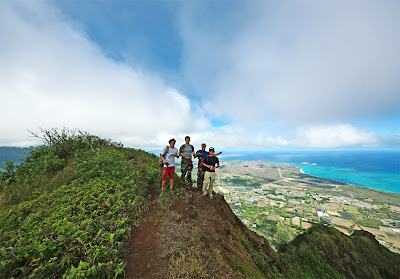 just to be clear, albeit possibly foolishly, i did scale all rock faces without the use of rope (even with the rope dangling in front of my face). also, we can't forget about the part on the ridge where trees were blocking and we had to literally hang our asses over the right side of to get past that section. the last climb was no joke. i never thought i'd be able to love the 'aina as much as i did on this hike. God is great!

oops. it's suppose to say "right side of the ridge"

unreal. i look up to you and your hike buddies. literally. I'm like... hey, look at those guys up there. ;) nice job Kaleo & Co.

Wow Kaleo thats one mean trail. I dont think I have the guts to do that one. Good Job.

Knew you guys would have fun. The residents at the ranch showed me where I was allowed to park and walk through without trespassing. If you park in front around the corner from the ranch entrance next to the small fenced building, you can walk the road to the left of the ranch entrance which goes around the back and directly to the water tank. Good job.

Hey kaleo. I was looking for a camera to take hiking and one that could do fish eye lenses. Do u have any suggestions. Any help would be great

i use the gopro hd hero from goprocamera.com. hands down the best and most affordable fish eye hd video camera out there...

You guys are animals! Is this hike more nutz than Olomana's backside?

both hikes are dangerous.