Pu'u Kaua is one my favorite trails on the island of Oahu.  It is a trail less trodden on by hikers, but used mostly by the Nature Conservancy and the Oahu Army and Natural Resources crews for plant research and invasive species eradication.  Although the trail is one of the lesser known on the island, it still gets regular trail maintainence by the aformentioned parties, making for a well-defined, wide open trail year round.

From the Pu'u Kaua trailhead it takes less than an hour-and-a-half to summit Kaua's peak at 3,127 feet.  The ascent gets steep around half-an-hour into the hike, and gets even steeper around the last 150 feet, with ropes installed along several sections.  It's too bad, though, that access to the actual trailhead takes some time and navigation through a hot maze of dirt roads.

I've been to the peak of Kaua a number of times, the view at the top being one of the best 360-degree views on the island.  I've always wanted to connect Kaua's neighboring peak to the north, Pu'u Kanehoa, along the Waianae summit ridge.  However, doing so would require traversing a menacing ridgeline separating both peaks, complete with extremely narrow ridge sections, crumbly rock, and severe vegetation overgrowth.

Before attempting Kaua-Kanehoa I did some research on Kanehoa first.  I had never been up there, and just like Kaua, getting to Kanehoa's actual trailhead from the bottom is tricky.  The bottom portions of the ridge to the top of Kaua are mostly used by hunters.  Several write-ups, a Kanehoa topo map given to me by Steve Rohrmayer, and some info given to me by a hunter friend of mine who has hunted in the area a number of times proved very useful.

Kanehoa, unlike Kaua, rarely gets any hiker traffic.  The actual trailhead that was used by the Hawaiian Trail and Mountain Club started at what my friend Gary Badis and other local hunters call "Mongoose Theater," a manmade landmark near the base of the ridge leading up to Kanehoa that resembles a large green screen. Mongoose Theater can easily be spotted from Kunia Road, and the trail that heads up to Kanehoa starts in that relative area.

The Kanehoa trail was regularly hiked to the summit by the Hawaiian Trail and Mountain Club.  It's been over three years since their last clearing, so I knew that portions along the ridge would be completely overgrown.  In fact, Cory Yap and Baron Yamamoto scouted the trail about a year ago and reported heavy overgrowth near the middle sections of the ridge.

More importantly would be how to distinguish the summit of Kanehoa and where to turn down.  From the write-ups I had read and some tidbits given to me by August Smith, Kanehoa's summit is a large, exposed dirt clearing.  From there, ribbons would mark the correct path down windward.

Secondly, I gathered as much as I could about the summit section between Kaua and Kanehoa.  I only knew of two people completing that particular section.  Jeremy Kreis did it in his mind-boggling 12-hour solo hike from Kolekole Pass to Makakilo.  Pete Clines also completed the section, so I asked him how the ridge section was.  There are two prominent tooth-like features about twenty minutes from Kaua.  Just before the teeth are two sizeable rock faces that also have to be negotiated to get to the base of the first tooth.  Pete told me that he remembered seeing a contour that bypasses the teeth, avoiding the perilous upclimbs and downclimbs altogether.  The only way to find out was to go up there and take a look.

A week before actually committing to the Kaua-Kanehoa attempt, I went up to Kaua with Keoni Napoleon, August Smith, Tanya Peiffer, and Chastity Wassman for a quick scouting mission, stopping just short of the "teeth" to see what was really in store.

Initially, we started out on the dirt roads.  On past hikes I had done to Kaua, the dirt roads I took were firm and solid as you walked on it.  This time I could tell the road had been tilled.  Every step we took our feet would sink in to our shins.  We consorted to skirting the edge of the road where the ground was firmer and easier to walk on.

Further in I could also see a large bit of land had been developed with houses, wooden fences, and machinery.  That was not there the last time I was in the area.  Apparently, large parcels of land are being sold, which probably explains why the roads have now been tilled.  Whoever is in charge is aiming to rid of the roads so access by vehicle will soon be impossible.  It will be a shame if all the undeveloped cropland is sold for housing, and with it up for sale, it is inevitable.  And when that happens, the only way to get to the Kaua trailhead would be to hike along the Hono'uli'uli contour trail, a long contour trail at the base of the Waianae Mountain Range starting from Kolekole Pass to Makakilo that is similar to the Maunawili Demonstration Trail found at the base of the Ko'olau Mountain Range.

As we approached the teeth, looking at it head-on was a bit discouraging, especially what existed before it to get there.  The rock faces before the teeth are vertical and inverted in spots, and would require rope.  The ridge also lacked any spot to affix rope to with confidence.  The only trees we could use were far above and would require a good length of rope to safely start the downclimb.  After getting a good idea of what to expect, we all headed back down the mountain.


The next weekend Christina Delima, Nate Rubio, Jordan Hart, Aaron Nokai, and I set out to troubleshoot the rock faces.  Nate and I brought along a sufficent amount of rope and webbing along.  At the same spot I turned around the week prior, we could see a goat trail skirting off the windward side of the ridge and into the gulch below.  Instead of following the ridge line, we'd affix my webbing to a sturdy tree, hang it down the windward side of the ridge, and make our way down to a thin ledge that would allow further progress to the second notch.  One-by-one we successfully made it down past the first rock face, leaving my webbing looped around the tree just in case we would decide to turn around.

The second rock face required a sketchy leeward downclimb off the ridge to a thin ledge
with rope affixed to a fence on top of the ridge.  Although not as big as the last downclimb, this obstacle was tricky because the smooth rock face was devoid of hand and foot holds.  The ridge was narrow here, but there was fence built directly on top of the ridge providing some security and something to hold onto.  The drop to the leeward was giant, and slipping there would not be a good place to fall.  Nate looped his rope along the fence.  Jordan and I made our way down to the ledge and past the second rock face without any trouble.  Christina, Aaron, and Nate stayed back while Jordan and I reached the base of the tooth.

Watching from afar and still at the top of the second rock face were Chritina, Aaron, and Nate.  We yelled out that getting up the tooth was doable and that we'd coach them on the way up.  Christina elected to go back to the first rock face and retrieve my webbing.

Incredibly nerve wrecking was the bird's eye view Jordan and I seen as we watched our three friends follow suit and climb up the tooth one-by-one.  Everyone made it safely up the tooth, and we proceeded to the opposite side.

The opposite side of the first tooth was narrow, extremely crumbly, and equally challenging.  Butt-scooting was the only option.  Rocks would crumble and loosen with the pressure of our weight.  Near the bottom was the trickest.  Hand and foot holds had to be chosen wisely as much of the rock would give way to the slightest touch.

Staying along the ridgeline, we made our way towards Kaua.  Judging by the overgrowth, it's safe to say the section between the teeth and Kanehoa is one of those Oahu ridge sections that is rarely ever hiked.  The only swaths we could see were suicidal goat and pig trails shooting down the leeward and windward slopes.  Other than that, no ribbons, no eradication fences, no rat traps: nothing.  Several spots along the ridge allowed for a nice open rest spot in the shade, some more exposed than others, allowing spectacular views overlooking the western portion of the island.  But once we started moving again, we found ourselves pushing through, crawling through, and getting tangled in vegetation.

As we neared closer and closer to Kanehoa, a swath became more and more apparent.  After a short and amazing exposed section just before Kanehoa, we were at the flat, dirt summit of Pu'u Kanehoa.  We wasted no time at the peak and just headed down the obvious trail heading down a windward spur that was marked with ribbons.

For a moment, the ridge seemed to be in awesome condition, with a well-defined trail to follow, but just as Cory Yap and Baron Yamamoto had said, we reached the overgrown middle section and actually lost the trail a few times.  Not wanting to veer in the wrong direction, we just stayed true to the ridgeline, keeping our eyes peeled for ribbons and a swath at our feet below the vegetation.

We reached a junction where the ridge split.  The left option, I assumed, led to Mongoose Theater; the right option looked to be more of a direct route toward the direction of our car.  We decided to take the right spur.  After descending for what seemed an eternity, we reached massive groves of California grass.  Following faint trails through the grass, we finally hit a road.  Turning left on the road we found ourselves in cropland and at the back of Kunia Camp.  From there we walked into Kunia Camp then on to Kunia Road and back to our car. 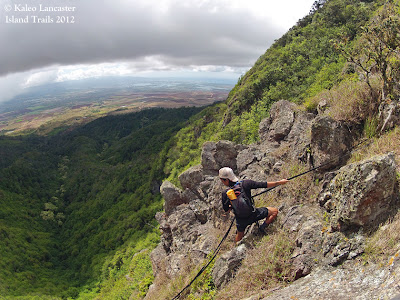 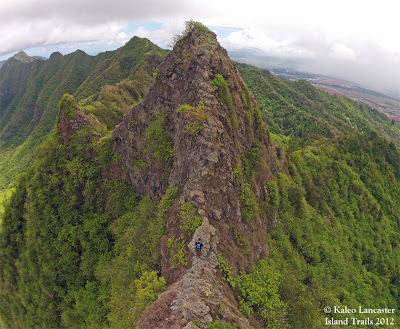 Jordan at the base of the 1st tooth. 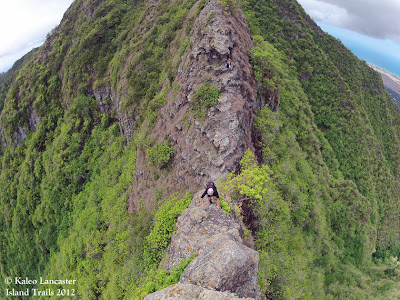 Christina making her way up the 1st tooth. 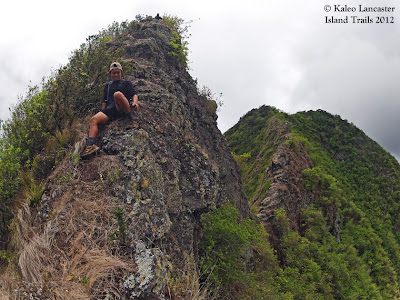 Coming down the opposite side of the 1st tooth. 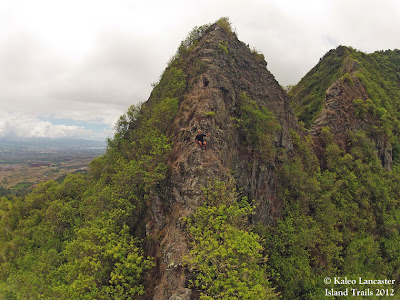 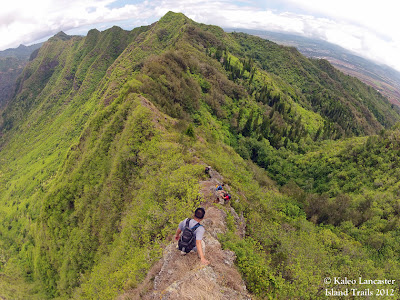 Coming down the opposite side of the 2nd tooth. 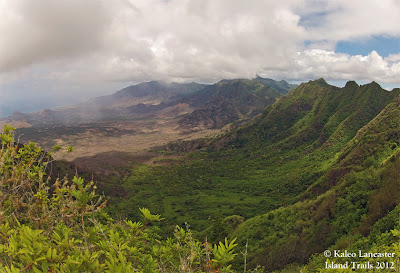 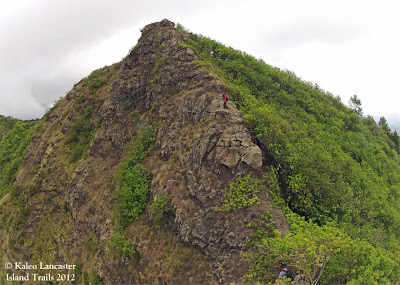 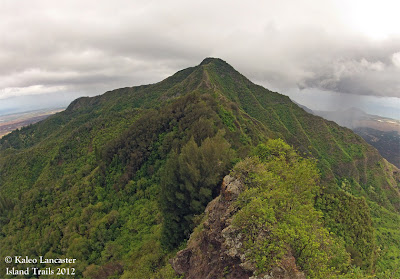 Looking back towards Kaua from Kanehoa.﻿

Nice One! Do you think starting from Hapapa would be easier when faced with the tooth sections?