You can't complain when a trail offers a ridge and stream walk that ends at a two waterfalls. The only complaint would have to be the length of this hike. At eight miles round trip, Koloa Gulch is one long trek that reaches far into the Ko'olau Mountain Range. The hike requires a permit from Hawaii Reserves in Laie because the trail crosses over private property; I obtained the permit a day before the hike.

Kulani was the only person to sweat out the gulch trail with me. The trailhead is located just after The Polynesian Culture Center in Laie. It starts off with a gradual hill climb to a ridge that eventually descends slowly into Koloa Gulch. The slow descent reaches Koloa Stream. Initially, the stream was dry, and we were both pelted by hoards of mosquitoes. As we advanced deeper into the gulch the stream started to show signs of water.

We crossed Koloa Stream well over twenty five times, counting each and every crossing along the way. Counting was especially important on the way back just in case we happened to miss the junction to get back on the ridge. The constant weaving in and out of the stream truly tested our hiking judgement, yet it is very hard to get lost being that you are surrounded on both sides by mountain walls; however, there is a fork near the end of the stream. The right junction leads to where Kulani and I ended at; the left junction leads to another waterfall, but I've heard it isn't as great as the waterfalls we ended at.

If you're great at suicides, take this hike. It's long, but the reward is a lush 100-foot waterfall nestled deep in the middle of nowhere. The hike is not at all strenuous; however, the rocks in the stream are very slippery, and there are parts where huge boulders covered with moss must be climbed. 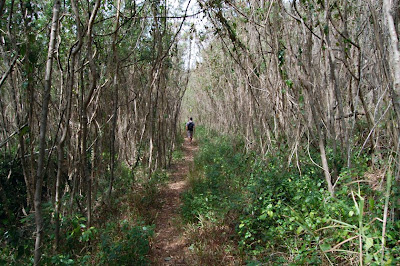 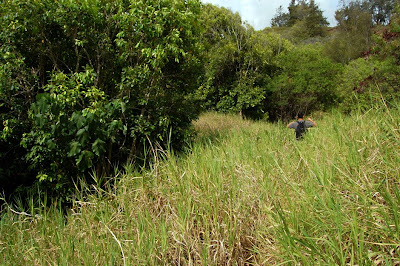 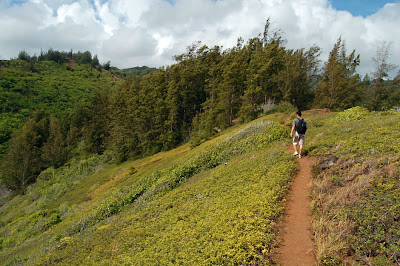 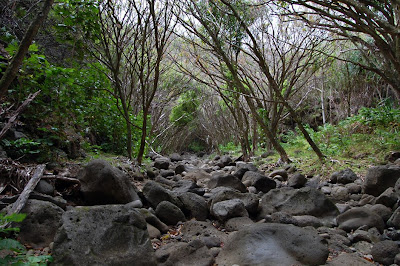 The beginning of a long walk up Koloa Stream. 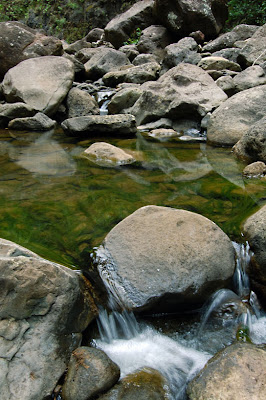 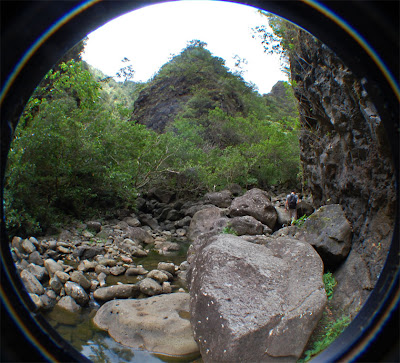 This is where the stream splits. We took the right fork. 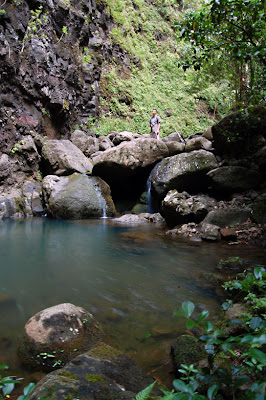 Cool picture. Kulani's head is blurry. This isn't the last waterfall, by the way. 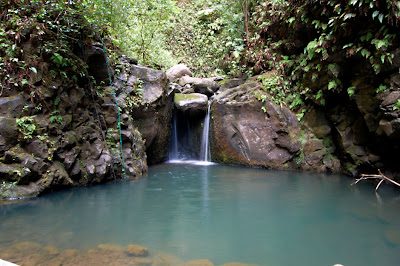 Here's the end of the hike. The rope on the left side of this waterfall helps to reach the larger waterfall above and to the right. 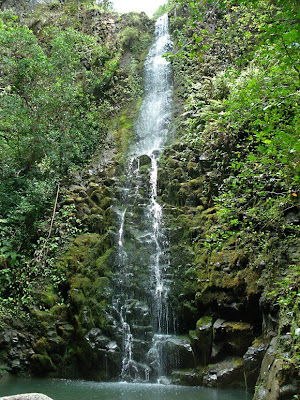 I just did this hike yesterday! I wasn't expecting it to be so LONG - but it was well worth it. Even with all of the bug bites and slippery rocks.

Thanks for a great write up of the hike. Just survived it today, and it helped to know what to expect.

Any guidance on how to get to the trailhead? Great write-up!

you can find the trailhead by taking kamehameha highway from either side of the island. a good landmark is the polynesian cultural center. coming from kaneohe, if you pass PCC, you've gone too far. coming from haleiwa, if you pass laie beach park, you've gone too far. you'll see a huge white mansion on your left coming from haleiwa, or your right coming from kaneohe. directly across is a dirt road. follow it to its end where a chain blocks further progress. walk past the chain and you'll see information about the hike. have fun...

Looks like a great hike. What permit would we need to get to enter the area? Thanks

to get a permit, visit hawaii reserves, inc. located in the laie shopping center. ask the person at the front desk that you're interested in getting a hiking permit. you'll have to have all the people that are going with you present because hawaii reserves wants to see everyone's ID's. or you could just not get a permit, and wing it like a lot of people do. but to be safe, just in case you run into security, get the permit...

How long did it take to complete?