First off, I'd like to give Daniel a pat on the back for being good company on all the hikes we've been tackling so far, especially the one we did this past Sunday. Like my hiking companion Shanoah on the Dupont Trail, Daniel managed to sneak in only three hours of sleep after hours of spear fishing and drinking enough beers to keep a man in bed for the day. I commend what you did this past Sunday. You're nuts.

My sights have been set on Pu’u Lanihuli since I first did the Kamanaiki Ridge trail back in May 29th, 2009. Almost one year has passed, and Daniel and I accomplished the difficult trek in hot and muggy conditions. The terminus of the Kamanaiki trail sits under a large ohia tree on a broad grassy area. An obvious trail beyond this grassy area climbs to Lanihuli. So I did some research and found out that hiking to Lanihuli from Kamanaiki past the grassy area can and has been done, but it is a long, unmaintained route. Knowing this, I put the hike on hold.

Just recently, the Hawaiian Trail and Mountain Club had a trail clearing scheduled for – you guessed it – Pu’u Lanihuli. This was my opportunity and advantage to hike the 2,700 foot pu’u in great trail condition, but where was the trailhead, and would the club be clearing the route from Kamanaiki? I came to find out -- after reading internet write-ups dating back to over a decade ago – that there are three other routes to Lanihuli other than Kamanaiki Ridge, all of which are on private property. Because the trails lie on privately owned land, I’ll have to keep the trailhead a secret, for there are signs everywhere in the initial part of the hike that clearly states no one should be there.

Daniel and I got off to an 8am start. We parked at a cul-de-sac and headed to a locked gate that had to be climbed. Past this gate, a fence came into view with overhanging barbwire. A faint trail followed the fence line momentarily, leading us deeper into a forest of Eucalyptus trees. At the fence’s end, we finally spot a ribbon. A short inspection of the ribbon indicated that it was brand new (very pink); a very pink ribbon meant it was tied just recently by the club; it also meant that we were on the right track to Lanihuli.

The initial trail section is so well-trodden and defined that it’s hard to believe the trail exists on private property; it’s obvious that people use the trail all the time. We even passed a small campsite under a forest of ironwoods. After the campsite, the ridge narrows considerably, passing a long, beautiful stretch of Cook pines. The trail reminded me of a greener Kamanaiki, with its long, gradual climbs, and its menacing dips: enough to work up a heavy sweat. A couple exposed spots along the ridge offered us nice views of Konahuanui and Nu’uanu Valley. It was at these vantage points that we could also see Lanihuli in the distance, and good grief, was it far away.

We pushed further, eventually reaching the first stretch of uluhe ferns. A little under an hour, we reached a bamboo grove to our left and a “T” junction. The left junction is the Kamehameha Schools Kapalama Trail; the right junction headed mauka towards Lanihuli.

The ridge beyond the junction is a rollercoaster. Hill after hill, drop after drop, we were beginning to think that this was going to be a repeat of the brutal Red Hill Ridge Trail we did two weeks ago. The weather was very hot with little wind. The presence of vog wasn’t a welcoming sight either, for hiking during light “kona wind” days are the worst.

At about an hour-and-a-half in, we reached a section of the trail that dropped steeply to what is the narrowest part of the hike. Crossing this dike section wasn’t as scary as we thought because the trail now contours to the right of the scariest part. Before the contour trail was in place, one would have to walk on a half-a-foot wide dike with a massive vertical drop to the left and a more conservative drop to the right. I watched as Daniel cross this section from afar, hoping to get a few shots of him with my camera. While waiting, I heard rustling in vegetation behind me. I heard a low grunt and immediately stuck out my four-foot long bamboo stick that I snagged from the aforementioned bamboo grove. I was in war-stance – attack mode, if you will, but for what? Was I about to gouge the hell out of this pig’s eyeballs? I got so startled that I careened off the southeast side of the ridge into heavy brush. What a panty. Emerging from the brush above was – to my relief – a Caucasian hiker that was hiking alone.

“I thought you were a pig,” I yelled.

“No, brah. You would have known if I was one pig,” the lone hiker said with a pidgin-English accent.

We exchanged a few words, and he was off. The guy blazed it on the last steep climb to the top of Lanihuli like it was a stroll in the park. He had come from the Kapalama trailhead.

The last climb to the summit is like is like any other Ko’olau hike: steep and exhausting. There was one false peak, and soon after, we reached the summit at 11:30am. The lunch spot is a small, flat, grassy area; while eating our musubi’s, Daniel and I were almost sitting shoulder-to-shoulder. The views on this day weren’t as breathtaking as it could have been. Haze from the vog blanketed the view below, and dark rain clouds began forming to the southeast, warning us that a long stay at the summit would not be a good idea. To the right of the summit, about half-an-hour away, was another higher peak, with an obvious trail leading to it. To the left was a view of Pu’u Kahuauli, the terminus of the Bowman Trail. 2,000 feet straight down was the H-3 freeway, with views of Kualoa and Chinaman’s Hat, Kaneohe Bay, Kailua, Lanikai, part of Waimanalo, and part of Mount Olomana. After a forty-five minute rest, we headed back down.

An hour into our descent, it began to rain very hard; however, by this time we were in relatively safe territory near the Cook pines. If we had been closer to the summit, we would have been in trouble on the steep rope aided hills on the way back. We also spotted the junction with Kamaniki Ridge on the way back. The trail is very faint, obscure, and marked by a light blue cloth. The trail is in a tangled grove of Sydney blue gum and guava trees, all of which lie directly on top of the trail.

There are spots along the ridge where ropes are in place to help climb up and down the steep hill sections. Before reaching the summit, the view along the ridge of Pu’u Kahuauli and Kalihi Valley is beautiful, but that did not last long given the weather conditions. The trail is a hell of a workout, and it’s probably one I’ll never do again (there are better Ko’olau ridge hike than Lanihuli), but I would have to say that the initial ridge section of Cook pines is one of the more beautiful sections of any Ko’olau ridge I’ve experience. If you find the trailhead, try it. You’ll lose three pounds of water weight when you’re finished. 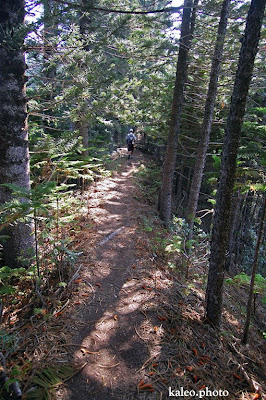 Initial ridge portion of the hike thru Cook pines. 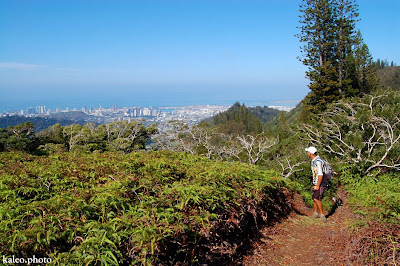 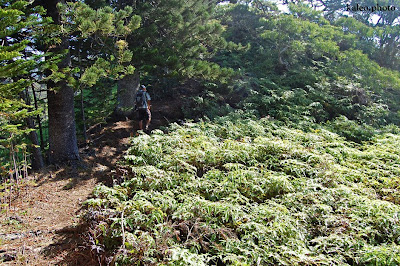 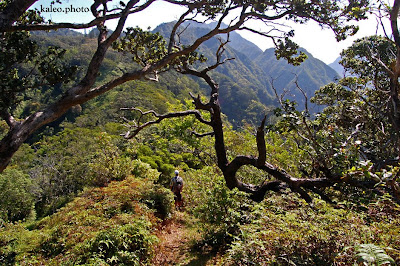 Here's Daniel looking at how far we have to go to the peak of Lanihuli. 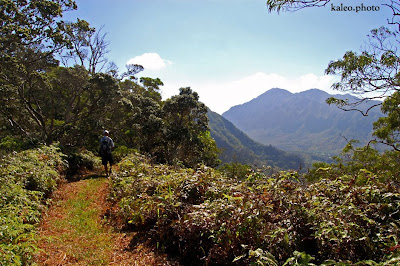 Nu'uanu Valley and the twin peaks of Konahuanui to the right. 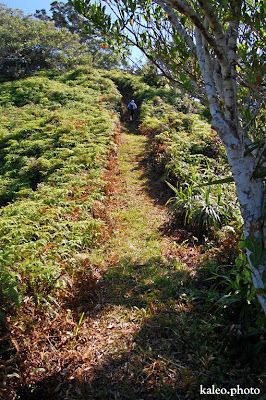 Weed whacked to hell. Nice job by the HTMC. 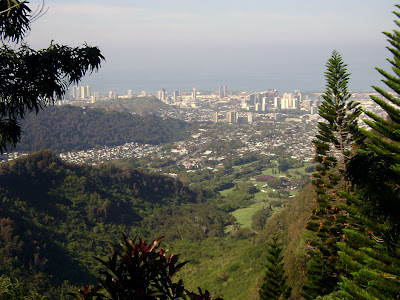 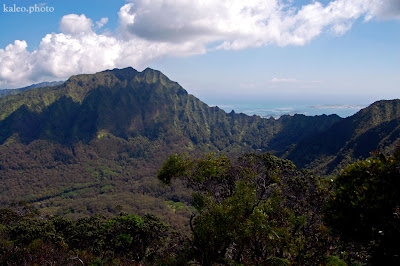 Looking into Kalihi Valley. The left portion of the peak is Pu'u Kahuauli, the apex of the Bowman Trail. How's that jagged saddle? I heard there's a trail on there. 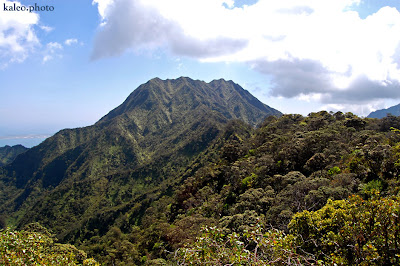 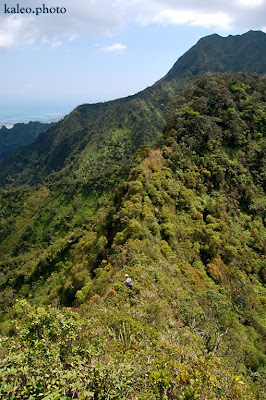 Here's Daniel on the narrow section. Not that bad. Just don't slip. 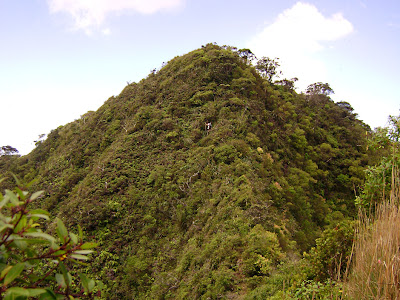 Here's a picture of me on the steep drop before the narrow part of the hike; Daniel is taking this picture past the dike. This is where I almost fell because I saw that hiker behind me and I thought he was pig. If you click on the picture, you can actually see him about 15 feet above me. This section is pretty nuts. Long ropes and super steep. (photo: D. Napoleon) 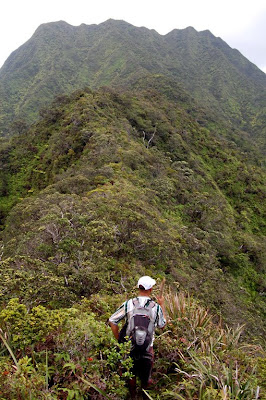 Getting ready for the final climb. 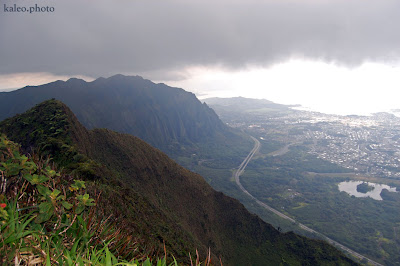 Looking towards the northeast. In the picture is Pu'u Kahuauli, Kaneohe and its bay, and the H-3. 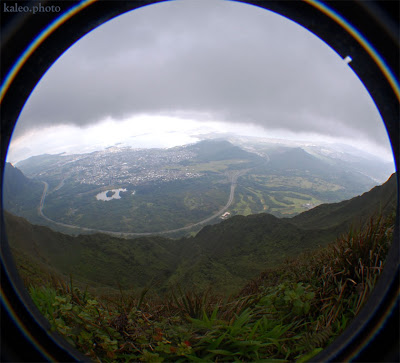 
And here's something new for the blog: video! I'm going to make it a point to shoot some video along the way on future hikes. I made a YouTube account for the blog. Check it out here: http://www.youtube.com/user/islandtrails
This is video Daniel shot from the summit.

haha i used to like mercury program back in High School. brings back good memories of riding in the back of a car stoned. you should check out nujabes, caribou, rjd2 , madlib, etc. if you havent already