Yesterday didn’t start off well. I woke up at about 5:45am, packed up my hiking gear, left Mililani at 6:30am, picked up Daniel in Wahiawa, and met up with Justin and Kulani at Kulani’s house in Haleiwa. From Kulani’s house, we would shuttle in my car past the North Shore all the way to Kahana, but once on the road, I realized that I forgot the most important item for hiking: shoes. The guys joked that I should do the hike in just my socks. Daniel suggested I just do the hike like an ancient Hawaiian and go barefoot. Yeah, right. Pu’u Manamana is definitely not the type of trail to emulate an ancient Hawaiian.

Since I set up the hiking excursion, there was no way I was canceling one of the most dangerous trails on the island for my three friends on the account of my forgetfulness. So I assured them that we’d make it to the trailhead before 9:30am, but I would first have to backtrack to Mililani to get my shoes. What a hassle! Once at Mililani, I realized I had forgotten my cell phone on Kulani’s couch back in Haleiwa. I deserved a serious ass-whooping for my careless mistakes.

The drive along the H-3 proved that the weather was going to be hot and muggy, with clouds forming over the Ko’olau Mountain Range. In addition, Memorial Day was in full effect as we passed the cemetery at the Valley of the Temples; traffic on Kahekili Highway was horrible.

We reached the trailhead and headed upslope at around 9:15am. It wasn’t even half an hour into the hike and we were sweating bricks already. Three tourists drafting us were aiming for the side trail to the Crouching Lion, but they didn’t see the junction and ended up following us all the way up the steep ridge of Pu’u O Mahie Ridge. They eventually turned around at the narrow spots, and they also lacked sufficient amounts of water to hike onward.

Remember how I said things didn’t start off well? Things got worse. After huffing and puffing up Pu’u O Mahie Ridge, I realized that I forgot the small towel I use to wipe and dry my sweaty face. I bring a small towel on every hike, and for some reason, I left it in my car. I also realized I forgot the battery for my Nikon D40. This meant that I had to lug around a bulky camera in my bag that was of no use; it was just extra weight. I did have a compact Canon digital camera, which was fully capable of snapping stills and capturing video. I opted to only take video. I was kind of glad I didn’t have to take photos this time. The last time I did this hike was exactly one year ago (May 25th 2008 – how ironic – I didn’t even plan to do that), and I snapped some amazing photos. Shooting video this time made for a different experience.

Kulani and Justin were having a blast on the narrow sections. They were even running on the narrow trail, those crazy bastards. Daniel took it in stride, for it was his first experience on a trail like Pu’u Manamana. You ready for Kalena now, Daniel?

I managed to get good footage before we reached the forest section of the hike. Plus, it started to rain, so I had to put the camera away anyway. When I last did Manamana with my friend Matt, we hiked to the “Turnover” clearing and headed back the way we came because we couldn’t find the junction that headed back down to make the hike a loop. I don’t know how the hell we missed the junction because this time I spotted it easily just before the “Turnover.”

During our descent, it began to rain harder. The trail was very muddy and slippery at this point, especially on the rocky and rooty portions of the trail; however, there were lots of stumps and branches to hold on to, making for a good upper body workout. About halfway down, the ridge narrowed to about a foot wide; this part of the ridge was probably one of the narrowest ridges I’ve ever seen, but the drops to each side weren’t huge, though falling would prove painful.

The four mile loop took us exactly five hours to complete. We drove to Swanzy Beach Park in Ka’a’awa to wash the stink off of us at the park’s showers. Also, a bar of soap was conveniently available for us to use. Feeling fresh, triumphant, and deserving of some kind of reward, we headed directly across the street to the Ka’a’awa 7-Eleven to buy ourselves each a Mickey’s Ice 40-ounce bottle of beer. I’ve never had a 40-ounce that tasted so good. 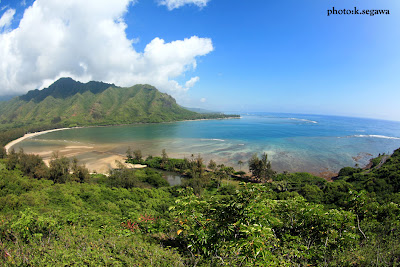 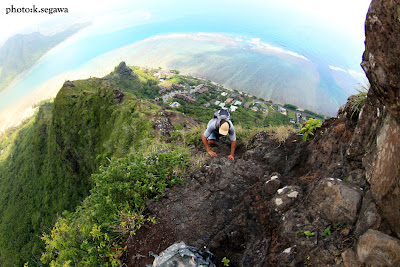 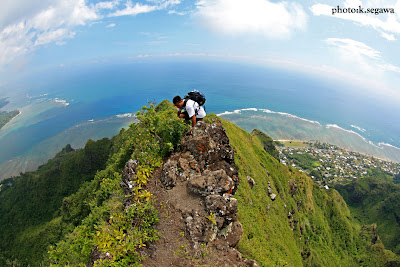 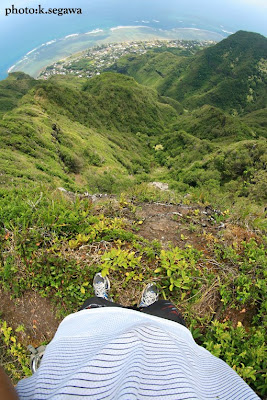 Kulani knew that a foot shot was required on this hike. (photo: K. Segawa) 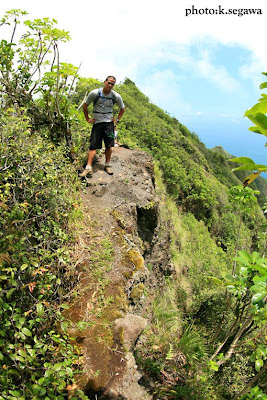 Here's a picture of me checking out the narrow ridge. (photo: K. Segawa)

you're crazy to do this hike twice in a year.

epic clips man, let me know if you want a handicam for your next hike

OMG I can't believe I didn't fall from a crumbling rock when I hiked it about 6 years ago. It was one of the scariest hikes i've ever done. How are the cables and ropes holding up?

i have hiked pu'u kalena and was wondering if this one is equal to kalena? little nervous about doing this but figured if i can do kalena this one should be ok, what do ya think?

you'll be fine. in my opinion, kalena is scarier than manamana...