Today’s solo hiking session scared the shit out of me. I think it was because I was (#1) hiking alone, (#2) hiking in the rain, and (#3) scouting the treacherous Piliwale Ridge trail: three elements that do not mix well with one of Oahu’s most dangerous ridge hikes. I have to admit that this is the most dangerous ridge hike I have ever seen. The trail has everything that makes a hike frightening, and I didn’t even make it to what seemed to be the scariest parts up ahead.

The start of the Piliwale Ridge trail can be accessed from walking about twenty minutes from the Pali Highway side of the Maunawili Demonstration Trail. After the twenty minute stroll, there is an obvious, well-trodden trail on the right. After ascending gradually, the trail becomes steeper. The cars on the Pali Highway began to look like Micro Machines, and after only about twenty minutes of ascending, I could see that I was almost as high as Olomana’s first peak, which loomed in the distance to the east.

As I huffed and puffed, higher and I higher I went, the trail disappearing and reappearing through heavy brush along the ever narrowing ridge. There was so much brush along some sections of the ridge that I had to actually duck-walk with my head in between my knees under branches and other tangled vegetation. Rain pelted down on me as well, but I had my handy Merrell rain jacket and Deuter backpack equipped with a rain cover to keep me and my pack’s contents dry.

At some point along the ridge, a few very large boulders stood in the way of my progress, but I could see the trail contoured around to the right. Soon after more duck-walking, I reached another boulder section. This time, the boulder section was nearly vertical, with no contour trails on the right or left (both sides harbored sizeable drops), and usually at sections like this on other trails there would be ropes to aid the climb. Not here. So I did some talking to myself, giving reassurance that I would survive this section when the ever present danger of falling was clear and completely obvious. What made it worse was that the boulder I had to scale was very wet from the rain. The exposed boulder also lacked trees and foot and hand holds, which made the climb up and over sketchy as ever. If someone saw me from the highway, they would’ve thought I was the dumbest person on the face of the planet. Again, I talked, and talked, and talked to myself, found my footing, and finally made it up and over. I looked down and told myself, “Shit, that’s going to be fun going down.”

The ridge then dropped almost vertically about fifteen feet or so. This section was “the notch” that I had read about. Again, I saw no ropes, but going down to the left side of the ridge didn’t seem that bad. What looked really bad was the rest of the ridge after “the notch.” The ridge rises almost vertical, and it looks very rocky with barely any vegetation to hold onto to help aid the ascent up. Not only that, but the drops on both sides of the ridge were mental and -- to put it bluntly -- really fucked up looking! A fall would definitely not injure, it would kill, especially on the right side; the left side of the ridge is more vegetated. I could see some heavy showers approaching from the east, which was definitely not a good sign, so I snapped a few quick pictures and headed back down the ridge. Heading back down was just as nuts as going up. That boulder section I was talking about grabbed my nuts and stuffed it in my throat. But I somehow survived it in reverse and made my way back down, slowly but surely. I reached my car at 5:25pm; hiking to “the notch” and back to my car took a little under two-and-a-half hours.

The views at “the notch” are breathtaking, especially on top of the second boulder section. Looking toward the ocean you can see Mount Olomana. To the left, looking toward the ocean is Kaneohe; to the right are views of the massive, vertical ridges of the Ko’olau Mountain Range. Today, the Ko’olau Mountain Range was completely covered in clouds. The hike to “the notch” is quick, steep, and dangerous. The ascent is a cross between hiking to Olomana’s first peak and hiking Pu’u Piei with out the lauhala. Everything after “the notch” is completely mind-boggling, and I don’t know how anyone has made it to the top. The pictures do it no justice; you have to see it in person to believe it. I didn’t descend “the notch,” but maybe, just maybe, the rest of the ridge does not look as bad as it does from “the notch.” It looks like a lot of ropes would be needed past the dip in the ridge, and I didn’t see any. If anyone has done the entire trail and is reading this, let me know if you would want to do it again; I would feel a lot better to have someone who has done it that can lead the way to the top of Konahuanui. I’ll probably hike the trail on a sunnier day. Right now the trail looks too gnarly for my sanity. Sorry for the lack of pictures; rain sucks. 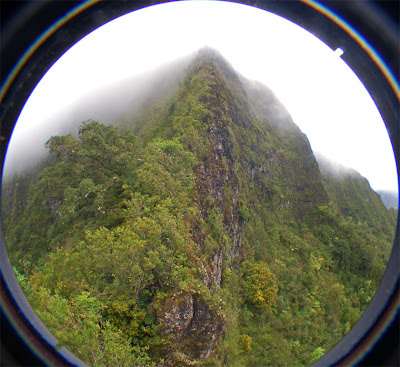 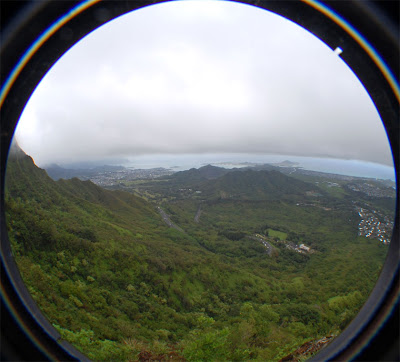 wow. first, scary! second... i want to check this hike out one day

Great post. What prompted you to hike alone? I'm tempted to as well.