Pali Puka has to be one of the shortest and most dangerous hikes on the island. In fact, it's so short that you don't need to bring anything except for a pocket first-aid kit and a small bottle of water. It is both exhilirating and instantly rewarding. A bit of history exists along the trail as well. It was along this ridge and others where the Battle of Nu'uanu was fought, a key point in Hawaiian history that helped unify the Hawaiian Islands.

The Pali Puka trail is located on the bus side parking lot of the Pali Lookout in Nu'uanu Valley. Getting there is simple: take the Pali Highway and drive to the Pali Lookout by following signs along the highway. The Pali Lookout is a very popular tourist attraction. Although the spot is popular and often loaded with tourists, not many people know that trails do exist to the left and right of the parking lot.

The Pali Puka trail starts off in a small bamboo grove. It then climbs steeply and within less than a minute you'll find yourself at the edge of a vertical cliff. From here the trail climbs northeast towards Lanihuli on a often windy ridge, at times right along the edge. Near the end of the trail the path gets notably narrow with drops on both sides. Further progress is hindered by a massive vertical rock face, although I have heard of a trail that exists all the way to the summit of Lanihuli. I'll have to scope it out one day. Just before this rock face is a puka (hole) in the ridge. This puka is said to be used by Kanikapule during the Battle of Nu'uanu. He placed a cannon in this hole to thwart off incoming enemies.

After a short rest, my friend Kevin and I headed back down. It had only been an hour excursion, but a very worthy one, for I had tried it before and failed. My hiking partner and I at the time were scared off by the presence of thousands of bees, the culprits that almost sealed my fate along Piliwale Ridge in October of 2009. This time along Pali Puka, Kevin and I were fortunate to encounter no bees at all. Next week Kevin and I are going to the other side of the Pali Lookout to hike to the Pali Notches and hopefully climb it. 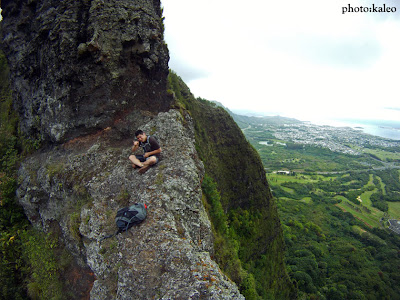 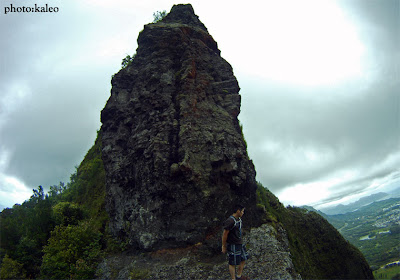 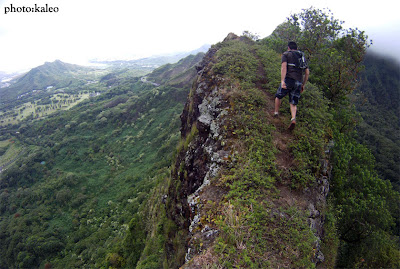 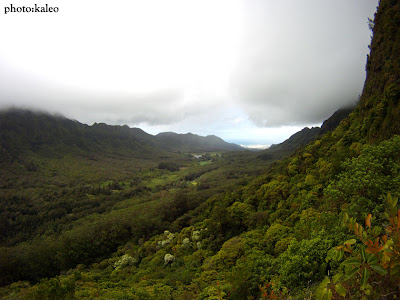 pali notches is pretty nuts, I live close so i do it a lot now. leave some rope for me if you go down the second notch. blaze it for me cuz im scared.

funny you say that cause we just did the notches today. we were trying to go down the 2nd notch on the right side, which is the only way, but failed. two girls and a guy did it with no rope. unreal! but we're planning on going back with rope for the 2nd notch some time next month...

Great trail write up! Would love your review of the hike at: https://lookintohawaii.com/hawaii/43473/pali-puka-hike-activities-oahu-kaneohe-hi