Yesterday, Nate Yuen led me, Ryan Chang, Duc Ong, and Matt Chessey on a steep hiking route known as Kaupo Cliffs in Waimanalo. The route, as Nate instructed, follows what is thought to be an old Hawaiian route used by "kukuni" or "runners." The kukuni would climb the steep cliffs in order to send messages quickly to those on the other side of the mountain. On this day we would follow in the footsteps of the kukuni and top out at the Ko'olau summit, turn right, and head down the popular Tom-Tom trail back down to our starting point. Nate said it had taken him and his hiking companions in the HTMC multiple times to redo the Kaupo Cliffs route which is rarely ever used.

When it comes to finding trails, the internet is second-to-none. Our leader, Nate, has an extraordinary website that I visit regularly, and his passion for photographing native plants is evident in his hiking blog posts. He often hikes lesser known trails to photograph the native flora, and because of this, his website has been a huge inspiration for me. It was a privilege to meet him for the first time and follow him on this day. Check out his website here: HawaiianForest.com.

Our intent on this day was to hike a ridge in Waiahole Valley, but upon arriving at our early morning rendezvous point, the weather proved unsatisfactory in the area: a clouded summit and rain clouds. Nate then suggested Kaupo Cliffs. I had read only a few write-ups on the route and wanted to do it for quite some time, so having Nate pull it out of his hat was a pleasant surprise. Ryan and I then followed Nate to the HTMC clubhouse in Waimanalo where we would park our cars and walk to the bottom of the Tom-Tom trail. With a 9am start at the clubhouse, we also met up with two other people that would be hiking with us: Duc and Matt.

When we reached the Tom-Tom entrance, it was obvious that Nate's trail choice was more than apt, considering the ideal weather conditions in the area. We were greeted with overcast skies and a light, passing rain as we moved forward along the trail. The breezes would increase as we headed further into the hike.

The trail to Kaupo Cliffs is very inconspicuous. It branches off to the left of the Tom-Tom trail and is barely recognizable. Luckily for us, Nate's friend had marked the route on a previous outing, so we followed fresh pink ribbons affixed to trees and branches to navigate our way. For a short while we skirted the backyards of houses in the neighborhood. At one particular home, we encountered an angry resident asking us where we were going. She told us that we were disrespecting her and that we should have first asked to go through her yard. Truth be told, we didn't go though her yard, and we were definitely not there to disrespect anyone. As she rambled on and on, we ignored her and just kept heading upslope.

Eventually we reached a point where a waterfall chute came into view. It separated the ridge that we were on from the ridge that we would have to access to start the steep climb to the summit. A ledge conveniently sat three-fourths below the top of the waterfall chute, leading a relatively safe hiking path to the next ridge over. Once at the next ridge, the grade became steeper. Again, there was not much of a trail, but there were ribbons everywhere to lead the way.

A lot of scrambling was involved as we skirted the edge of the ridge. The breeze was cooler now, with awesome views behind us of Waimanalo to Mokapu Point. Kanehoalani could even be seen. The Ko'olau range was covered in mist, and incoming rain squalls could be seen over the ocean. It was a gratifying reminder that this trail was a better choice than the ridge in Waiahole.

Nate wanted us to ease our pace so two of his friends, Pete Clines and August Smith, could catch up. They, too, had another trail in mind that day (Olympus to Konahuanui), but the weather, of course, was not up to par. Nate would often phone them along the way, giving them instructions on how to get to the ridge that we were on. Eventually, Pete and August seemed to have lost the way, and couldn't find any ribbons, so they ventured toward the base of the cliffs to blaze a trail up a ridge to the west of us.

We continued further, still scrambling, reaching narrow sections that could be contoured around or climbed over. Ryan, Duc, and I often opted for the climb-overs. Duc said it best when some sections reminded him of Olomana's third peak. Without a doubt, some sections were just like it. We also encountered old ropes, a severely rusted machete, pitons, and an occasional metal stake. Then we came to a spot along the ridge, looking up at massive vertical rock face. Here we contoured to the right on a heavily ribboned and narrow trail. The drop here was hairy. A fall could definitely prove fatal; however, a contour rope was in place for security, making the section a little easier to negotiate.

We then encountered a large array of pinewoods just below the summit, and before we knew it, we were at the top. We sat down, ate our lunch, and called Pete and August to see where they were. They were en route to the summit as well, but on an extremely steep ridge just before the Tom-Tom trail. We headed towards Tom-Tom to find them.

Now along the summit trail, we were trying to spot what ridge Pete and August were climbing. All the ridges looked mental -- doable, but mental. We passed two other hikers en route, and soon after saw August raising his hands and letting out a yelp at the saddle between Kamiloiki and Tom-Tom. Behind him was Pete, stuffing rope back into his bag.

I was introduced to them for the first time, knowing exactly who they were from write-ups on the net. (Pete has completed suicidal trails such as Pu'u Keahi a Kahoe via Moanalua Saddle and True Manamana. August has had his fair share of accomplishments as well: Red Hill Ridge to Moanalua Saddle and Piliwale Ridge.) I shook hands with both of them, and then I saw the route they took to get to the saddle. We could see a ribbon they had tied to a rock to mark their route, and my god, did it look scary. The climb wasn't long, it was just mind-boggling steep. Pete said he had affixed ropes a few times to aid the climb in the steepest spots, reusing the rope along the way. We conversed for a short while and headed up to the top of the Tom-Tom trail. From there, we waited for August and Pete to get some food in their bellies and headed down Tom-Tom.

It was nice to head down Tom-Tom free of clouds. The last time I did it I was completely disoriented due to the thickness of clouds. And on that previous outing, being on that portion of the Ko'olaus for the first time, I somehow was led astray a few times by side trails along the summit trail. This time, the trail was obvious, and the views coming down were spectacular. At some point along the descent, August, Pete, and Nate decided to take a rest at a grove of ironwoods. Duc, Ryan, Matt, and I decided to to split and head back to our cars without another rest. We shook hands with the trio for the last time and promised another adventure with each other some time in the near future. We were back at the clubhouse by 2pm. 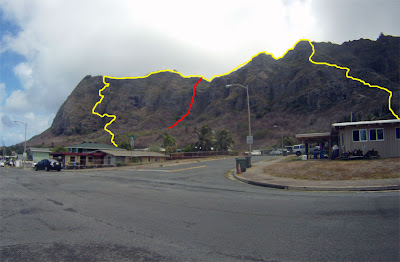 This is a rough outline of the routes we took.  The yellow route is the route Ryan, Nate, Matt, Duc, and I did.  It starts on the left, goes up Kaupo Cliffs to the summit, then goes right along the summit toward Tom-Tom.   The red route is the route August and Pete took.  We met with them at the saddle between Kamiloiki and Tom-Tom.  The route outlined on the right in yellow is the Tom-Tom trail descent. 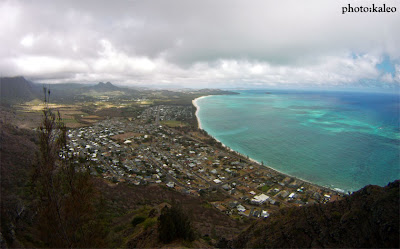 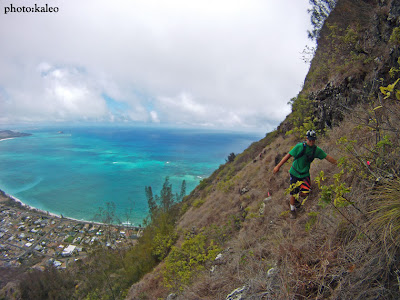