When it rains, head to Kalauao Valley.  I like to refer to it as the Maunawili Falls of Aiea, except that the waterfall in Kalauao Valley needs a good downpour to start flowing.  Plus, the odds that you'll be there by yourself are pretty good even though the trail gets trampled on more than often.  As an in-and-out hike, Kalauao is short at about four miles round trip.  The trail is muddy, steep at times, and slippery along the stream trail.  When it's flowing, the waterfall gushes, and a pretty large, deep pool sits at its base, perfect for jumping off the available ledges near by.  From the waterfall, you can either turn around and go back out the way you came in or explore beyond the waterfall upstream.  It is also possible to do Kalauao as a loop. That option serves up more of a challenge as the junction out of the valley is obscure, little used, and very steep.  Eventually it rejoins the Aiea Loop Trail.

Directions for the hike can be found below:
The hike begins at Keaiwa State Park.  Click this link for directions.  Go to the very top parking lot and park your car there.  You'll see a bathroom and a picnic area.  Take the Aiea Loop Trail.  You'll eventually reach a power line tower on your right.  Keep walking a little ways and you will see a very obvious junction on the left.  Take that junction.  You will reach another power line tower and will walk directly under it.  Keep going.  The trail will then open up and you'll find yourself gradually heading downhill on a broad ridge with paperbark trees and eucalyptus.  At first you will see an indistinct trail sharply turning right.  DO NOT TAKE THAT TRAIL; IT LEADS NOWHERE.  Instead, keep following the ridge downhill until you see another trail on the right that is more distinct and marked with ribbons.  It, too, turns a sharp right and heads steeply down hill.  You will eventually hit the stream.  Turn right and follow the trail upstream.  End at the waterfall and turn around, or take the trail on the left to explore further upstream.
To make the trail a loop continue upstream for about 20-30 minutes.  Keep looking on your right.  You will see a marked junction heading uphill.  The first junction is a very steep pig trail that is not recommended, but is doable.  The second junction is the route that is used the most and is well-marked and well-trodden.  Both junctions eventually intersect at a spur ridge heading straight toward the Aiea Loop Trail.  Once you're back at the Aiea Loop Trail, turn right for the 20-30 minute walk back to your starting point.  You can, however, turn left for an even longer hike along the Aiea Loop Trail.  Eventually you'll get a view of the H-3 Freeway and Halawa Valley.  Then the trail will split.  Turn right and follow the trail back to the parking lot.

For more pictures and write-ups about my previous outings on Kalauao, click on the following links:
Kalauao Falls - May 23rd, 2008
Kalauao Loop - March 14th, 2010 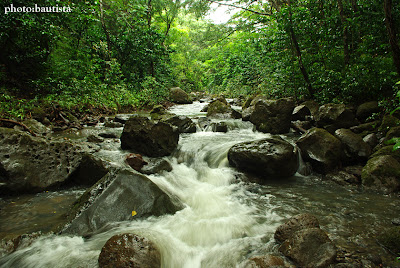 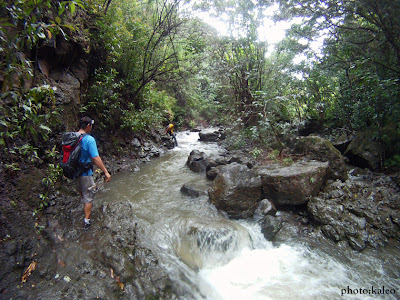 Getting our feet wet. 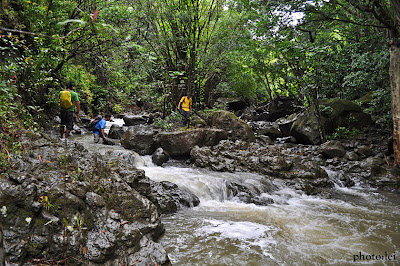 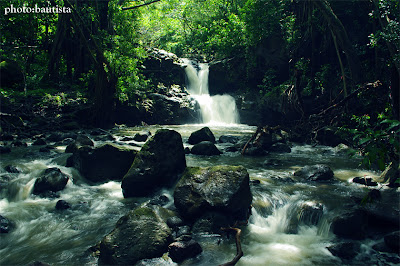 Looks awesome after the rain. When I did this hike late last summer, the whole stream was nothing but mosquito-infested puddles, and the main cascade was barely a trickle.

Heading out on this hike on a few hours, inspired by your post. Thanks for the great write up!