Today was the second time in less than a year that I hiked to the top of Pu'u Kalena, the second highest mountain on the island of Oahu. Daniel's been excited to try the trail out as well, so I gathered up the motivation to tackle this strenuous trail once again.

The last time I hiked Pu'u Kalena was in August 2008. You can read a more thorough write-up by visiting the following link, complete with pictures. Kalena - Aug. 2008. My aim back then was to just get the trail done and over with because some parts of the hike are just ridiculous dangerous, but today was more of an exploratory mission. And exploratory it was because from the looks of it this dangerous trail can be turned into a loop. From the first peak, there is an indistinct trail leading down the north face of the first peak; the trail is marked by an orange ribbon. I didn't go very far down to inspect the route, but I'm pretty sure it is the return route from the top of Kalena. At the top of Kalena, there is another indistinct trail heading southeast, with an obvious and dangerous looking ridge heading to the valley floor. This southeast ridge is what I assume to be the trail that heads to the valley floor and then climbs back up to the first peak, making the the Pu'u Kalena trail a loop hike. This loop sounds like a good idea because going up to Kalena and coming back the same way is very tiring and boring, for you have to do everything you did in reverse.

Aside from the loop hike exploration, I also explored a side ridge off of the Kalena trail. The side ridge exists just after the section with three ropes. The junction can be found on the left. I marked it with a fluorescent green ribbon for those who want to try it out. The side ridge is visible from the Kalena trail, and the last time I saw it I thought there was no way a trail would be on it, but I was wrong. The ridge looks paper thin, and from the Kalena trail, it looks as though it would crumble if someone were to walk on it. But a trail does exist, and there are old and new ribbons indicating that other people have attempted the rocky and extremely narrow ridge. Some sections are very tricky, especially a large rock face protruding in the middle of the ridge. I took some video of my troubleshooting and made a little video edit and posted it on YouTube. Check it out. The drops, especially on the western side of the ridge were insanely massive and vertical.

I didn't get much pictures from the hike, but Daniel and I did get a lot of video footage. Our total time on the trail was about six-and-half hours; this has got to be one of the few trails on the island where going down takes longer than going up. Our next goal will be walking from Wahiawa Heights to a view overlooking the valleys of Punalu'u, Kahana, and Waikane via the Schofield-Waikane trail, weather permitting. 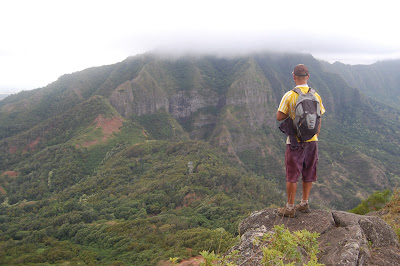 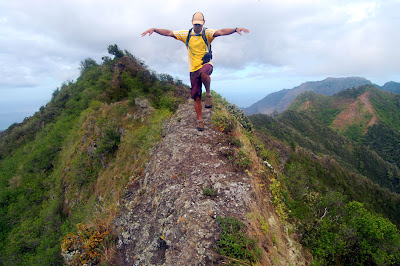 No room for error, but always room for the crane stance. 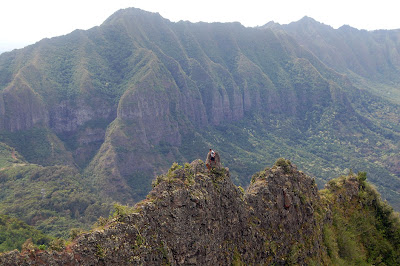 Here I am going around a sketchy rock face on the narrow side ridge off of the Kalena trail. (photo: D. Napoleon)

I've done Pu'u Kalena about half a dozen times so I know that trail fairly well and very familiar with that side ridge you did - watched the video and very impressed. people who have not done this trail have no idea how paper thin that ridge is - this is one of those, you just gotta be there to know coz the video, although great, does not do justice the difficult of traversing that ridge = glad you made it back in one piece! Wind can be distracting!
Nick