My sights have been set on the Schofield-Waikane Trail for quite some time now. On one particular weekend, the Hawaiian Trail and Mountain Club hiked the route, delaying my attempt in tackling the trail, so I decided to do Pu’u Kalena instead. Bad weather had settled upon another weekend I had planned to hike the fourteen-miler. There was no way in hell I was going to walk seven miles to the Ko’olau Summit and be greeted by clouds and rain. I wanted a view, and this past weekend, Daniel and I got that view: a view that may very well be the best I’ve seen out of any hike I’ve done on the island.

There are two ways to get to the Schofield-Waikane trailhead. One way is to drive to the trailhead. Driving to the trailhead requires a permit that can be obtained by visiting the following link: . A four-wheel drive vehicle is highly recommended as well, for the condition of the dirt road after a mile is rutted in spots. From the trailhead, the total mileage of the trail is about nine miles round trip. The second way to get to the trailhead – a lengthier option -- is to walk on the two mile dirt road from the water tower at the top of California Avenue in Wahiawa. The total round trip mileage for this option is fourteen miles.

Daniel and I paralleled the fence that encloses the water tower at the top of California Avenue at around 7:20am. An early start seemed apt because the last time I did a trail over ten miles I spent almost nine painful hours of hiking. Keeping the fence to our right, we followed an indistinct trail that eventually led us to the start of the dirt road. We initially passed a military training area to our right. A couple junctions come into view. Ignoring the right junctions and taking all the left junctions eventually led us to the official trailhead.

The trail begins with a steep descent, one that obviously has to be climbed on the way back out. A short ways in, we encountered a left junction. This junction is what I believe is the trail that leads down to the North Fork of Kaukonahua Stream and it’s multiple swimming holes. The first two miles of trail was cleared extremely well by the Hawaiian Trail and Mountain Club’s recent trail maintenance. However, after two miles, the trail becomes choked with uluhe ferns. The trail also becomes rough, rutted, and very muddy.

About an hour from the summit, the graded trail turns to an ungraded route along the ridge a few times, offering amazing views of the vast, undeveloped valleys of the Ko’olau Mountains. For as far as we could see, there were no signs of any buildings or power lines, just a lush canvas of greenery. The sound of insects, birds, and the cool breeze rustling through the vegetation were the only audible effects that could be heard. Looking back at how far we had trekked was mind boggling, for our starting point was not visible.

As the summit neared, we could see that our view was going to be free of clouds. We edged around a corner and could see Pu’u Ohulehule sticking out its peak, a sign that we were almost there. We reached the trail terminus and an intersection with the Ko’olau Summit Trail at around 11:40a. Spread out before us was the most beautiful view I’ve seen so far since I’ve started hiking. A panoramic view of Punalu’u Valley, Kahana Valley, Ka’a’awa Valley, Hakipu’u Valley, and Waikane Valley could be seen with the ocean in the distance. Mokapu Point could as be seen as well. Other features included Pu’u Piei, Pauao Ridge, Pu’u Manamana, Pu’u Kanehoalani, Pu’u O Kila, and Pu’u Ohulehule. From the viewpoint, Daniel scrambled up a steep hill behind us to get a better vantage point of the spectacular view. We reached a small clearing with breathtaking views in all directions. From this higher vantage point we could see the Waianae Mountain Range and the full length we had traveled from Wahiawa Heights. There was also an ungraded and very overgrown trail that led to the north along the true Ko’olau summit ridge. We sat down and had lunch, then headed back down the trail at 12:15pm.

Being that the Schofield-Waikane Trail is graded, the hike is not difficult. The only thing that is difficult about the hike is the mileage and the overgrown nature of the trail two hours from the summit; in addition, there are several steep climbs on the way back, but the climbs are not long at all. I cannot imagine doing this trail without it being cleared first. The trail will fall into the hands of nature if it’s not hiked within the next two months or so. With that said: if you plan to hike this trail, do it as soon as possible. Furthermore, the weather was God-sent on the day we hiked. Moderate trades, overcast skies, and a clear summit made for a perfect trek. I don’t even recall a point where I found myself sweating profusely. But we did get muddy, and we did – well, I did – fall several times. The fourteen miles took Daniel and me eight-and-a-half hours to complete. Coming back was faster than going up. I’ll probably check out the left junction to the pools in Kaukonahua Stream next time. As for Schofield-Waikane, I would definitely do it again, but it would have to be cleared just as it was this past weekend. 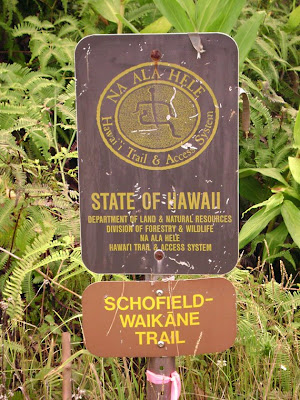 An hour of walking on a dirt road and you reach the official trailhead. (photo: D. Napoleon) 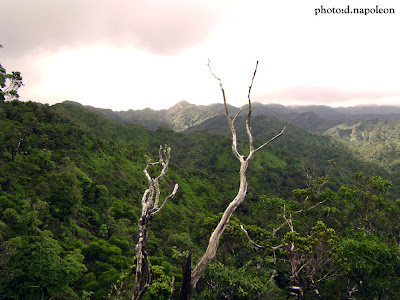 It doesn't get more remote than this. (photo: D. Napoleon) 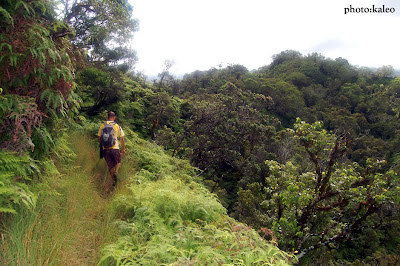 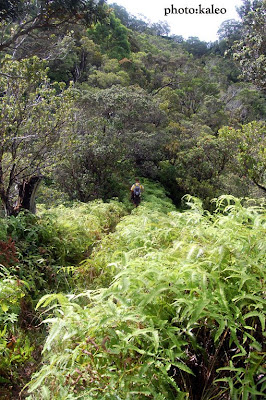 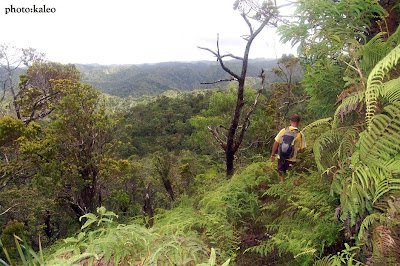 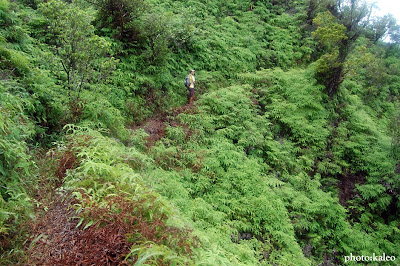 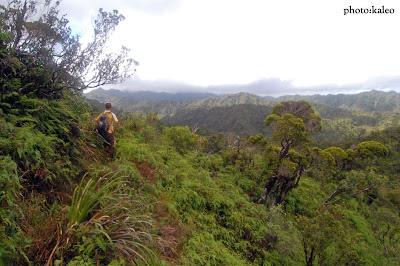 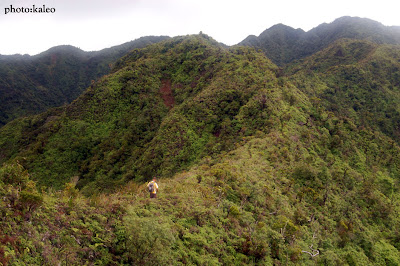 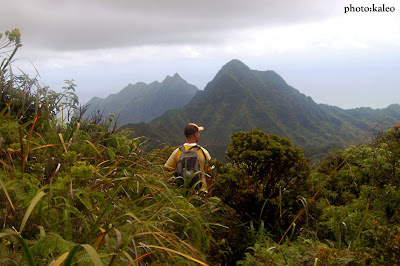 Approaching the lookout, Pu'u Ohulehule and Pu'u Kanehoalani in the distance. 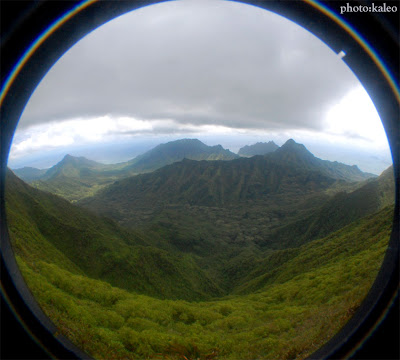 The unbelievable view from the lookout that intersects at the Ko'olau Summit Trail. 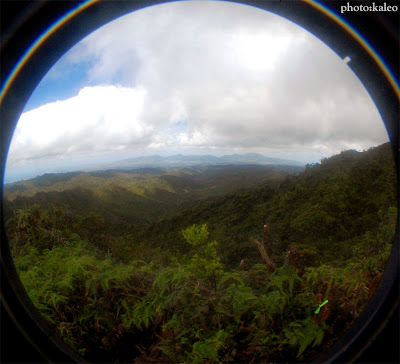 Looking toward the Waianae Mountain Range atop a higher peak. 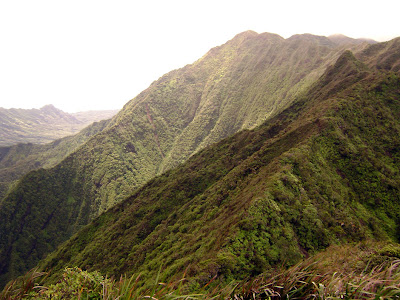 If you look closely, you can see the KST graded into the mountain side. (photo: D. Napoleon) 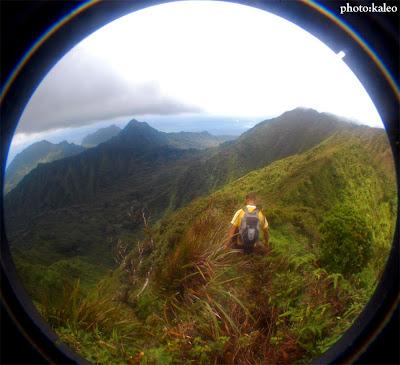 Heading down the higher peak. 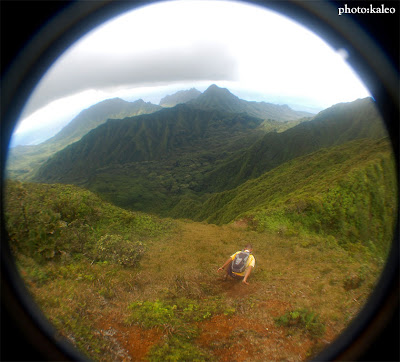 So you were able to access the trail without a permit? Any other tips for the hike?

there are rangers that patrol the dirt road mainly to check that everything is safe and people aren't doing anything illegal. you can get a permit, but i didn't get one; it's not needed, unless you meet a ranger that's strict. all the times i've been on the road the ranger's just asked us where we were going and what we were doing. be honest, and they'll let you go...

i know this is suuuuuper late, but thanks for your help! i actually did this hike back in may and lets just say what a horrible idea that was!! but its all good haha...good memories to look back on. basically the trail was so overgrown that i was slowed down heavily by the plants (many of which had thorns) to probably 1/5 of my normal hiking speed. once i got to the windward side, the trail was pretty much impossible to get by. literally tons of plants growing directly on the trail. i started the hike at 5am an didnt get to the windward overlook (not the end of the trail) until 1pm, with few breaks. so obviously i had to turn around. the hike back was extremely painful because my shredded legs were getting bombarded with vines and thorns. i couldnt even wash my legs when i got home because they stung so much. probably wouldnt do this hike again, but no denying it was a crazy experience!!