On August 22nd, 2010, I completed a big chunk of the Ko'olau Summit Trail between Mariners Ridge (Kaluanui Ridge) and Hawaii Loa Ridge with Ryan Chang, Brandi Tranter, Lei Yamasaki, Albert Carcueva, and Ian Diaz. The weather was ideal: overcast skies, light breezes, and dry conditions. The entire hike took us five-and-a-half hours, compliments of Albert's lung-busting frontman pace. The route intersects the apex of several other trails: Kuli'ou'ou Ridge, Pu'u O Kona, and Kulepeamoa. All the while along the summit trail, the views are outstanding. Ensuring we had a ride at both trailheads, we parked two cars at the Kulepeamoa Ridge starting point and then shuttled in one car to the start of Mariners Ridge. The Kulepeamoa trailhead is located at the end of Anolani Street in Niu Valley; Mariners Ridge is located at the top of Mariners Drive in Hawaii Kai.

Mariners Ridge is definitely the easiest and shortest hiking route to the Ko'olau summit. At a good pace, the top can be reached in around thirty minutes. It is also a child-friendly hike: easy to follow, no extreme ascents, and no dangerous or narrow sections. However, caution should be taken at the lookout because of the precipitous drops directly in front.

We pushed onward towards Pu'u O Kona after our short snack break atop the Kuli'ou'ou trail terminus. This was my fourth time along the section from Kuli'ou'ou to Pu'u O Kona, and it is one of my favorite hiking routes because as the ridge swings left, the view of the Ko'olau mountain range is unlike any other on the island. The trail condition here is also in very good condition. However, it is the most dangerous portion of the hike. The drops are massive, all while skirting the edge of the narrow ridge. At the top of Pu'u O Kona we hunkered down for a lunch break. We took in the magnificent view dead ahead of the Ko'olau mountains and Waimanalo all the way to Kualoa. Looking onward along the Ko'olau summit ridge, we eyeballed our route to Kulepeamoa.

The section between Pu'u O Kona and Kulepeamoa was the worst section of the hike due to the lack of regular hiker traffic and heavy vegetation. The trail is unmistakable, but it is far more vegetated than what we previously trekked. Albert and Lei led the way. They were the only two donned in pants, so pushing through the uluhe was easier for them to accomplish. Brandi on the other hand was wearing shorts just above mid-thigh. She would take the full onslaught of uluhe ferns on virtually every inch of her legs. For all of us with shorts, scrapes, cuts, and blood was inevitable. I even gouged my shin pretty bad from a spear-like stump protruding upward in the middle of the path. Blood pouring from my leg, but I still proceeded further with the brush trending thicker.

The summit trail saddled to a point between Pu'u O Kona and Kulepeamoa. It was here that the ridge leveled out and became more exposed and increasingly narrow for a short stretch. From this saddle we could see our final climb to the apex of Kulepeamoa. The ascent was slippery and muddy, with a couple cable sections for assistance. Finally, we reached the top of Kulepeamoa, and instead of resting, we kept our pace and headed on our final stretch along the summit to Hawaii Loa.

The section between Kulepeamoa and Hawaii Loa is in great condition. It is used primarily by those that hike up Kulepeamoa Ridge and descend Hawaii Loa Ridge or vice versa. It is also relatively short to traverse (+/- 20 minutes). The clouds were more prevalent along this summit section as well. Soon we found ourselves totally covered in clouds, a more than often occurence along this portion of the Ko'olaus. Four hours from Mariners Ridge, we finally reached the top of Hawaii Loa Ridge. Again, we sat down and took a short snack break.

We then descended the popular Hawaii Loa Ridge trail, passing several hikers on the way down. Because we parked in Niu Valley, we didn't follow the ridge all the way to the Hawaii Loa Ridge subdivision. Instead, we took a steep side trail on the left about half way down Hawaii Loa Ridge. The steep trail is marked religiously with pink markers left by the Hawaiian Trail and Mountain Club. It is a great upper body workout. Supporting the body's weight on the descent is accomplished by holding onto and swinging on guava trees. After about a ten mintue descent, we reached the streambed. We followed the stream makai until we finally reached our cars at Anolani Street.

In summary, Mariners to Hawaii Loa is not an overly taxing hike at all. Compared to summit sections from Pupukea to Aiea Ridge, Mariners to Hawaii Loa is a walk in the park. (Proof exists in my write-up of Manana to Waimano, a small section of the Ko'olau summit trail that lies in between Pupukea and Aiea Ridge.) There are many variations to the route we did; one can shorten it by descending either Kuli'ou'ou Ridge, Kuli'ou'ou West, or Kulepeamoa. It is also possible to keep going past Hawaii Loa. My plan is to one day trek every section along the Ko'olau summit ridge from Konahuanui to Makapu'u. So far I've done Wailupe to Wilwilinui, Ka'au Crater, Konahuanui 1 & 2, and Makapu'u to Tom-Tom. One day I hope to fill the remaining gaps with my footsteps. 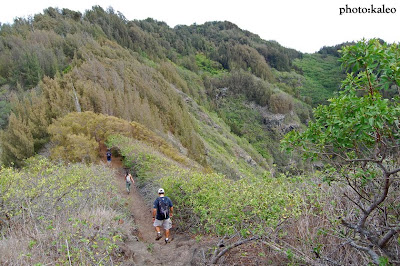 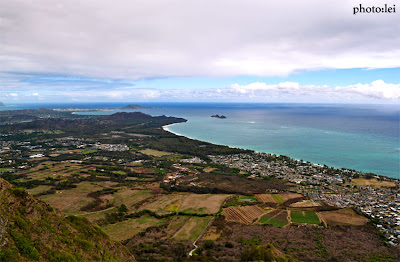 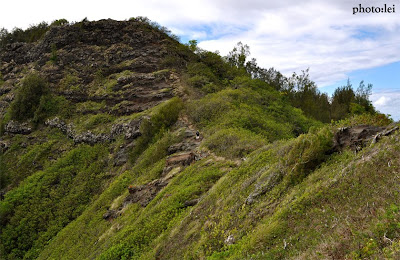 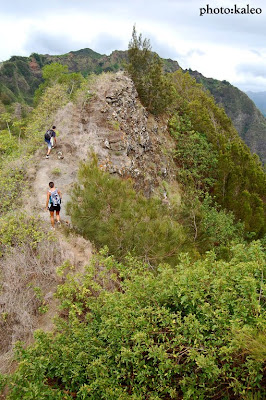 Ian and Brandi on the ridge. 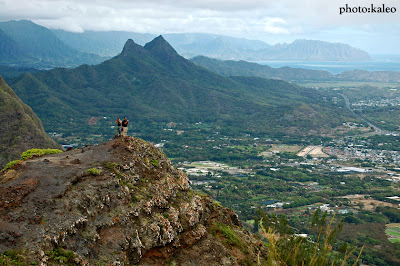 Lei and Albert atop a vantage point.  Olomana in back, Konahuanui at the top left, and Kualoa in the distance on the right. 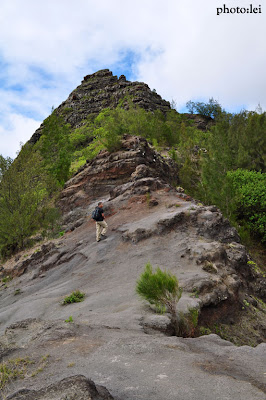 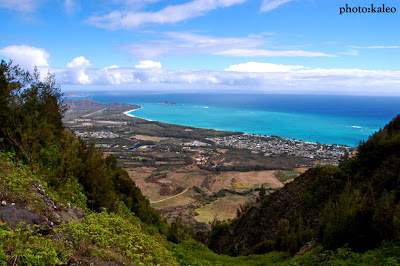 View along the summit ridge taken with my GoPro HD camera. 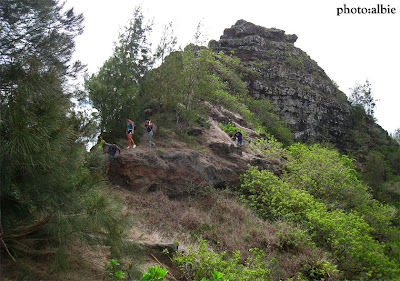 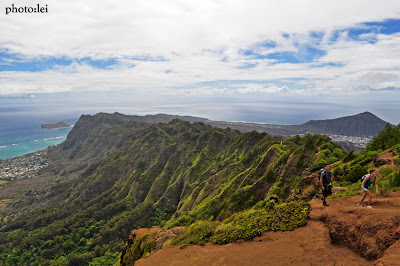 Topping out at the Kuli'ou'ou Ridge terminus.  Kokohead in the right of the photo.  Rabbit Island on the left.  (photo: L. Yamasaki) 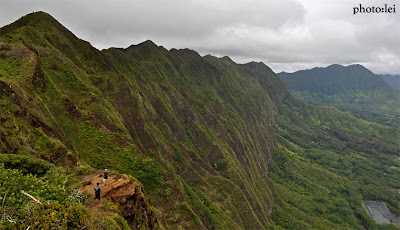 Trekking to Pu'u O Kona along the summit ridge with an amazing view of the Ko'olau mountains.  (photo: L. Yamasaki) 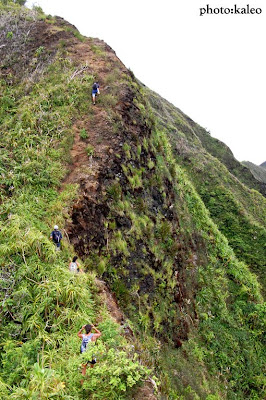 Steep rope climb along the summit ridge between Kuli'ou'ou and Pu'u O Kona. 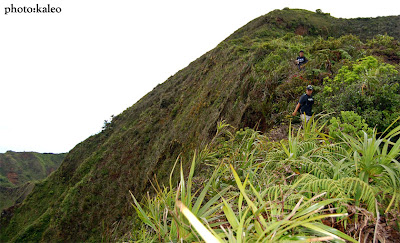 Ryan and Ian on their way to Kulepeamoa along the summit ridge past Pu'u O Kona. 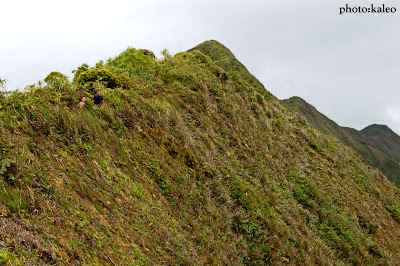 The leaders in pants: Lei and Albert. 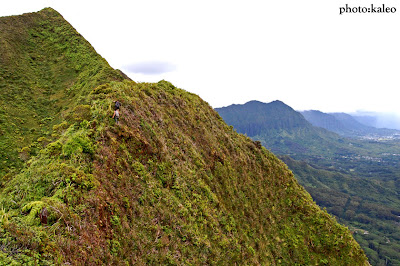 Lei and Albert along the summit ridge toward Kulepeamoa. 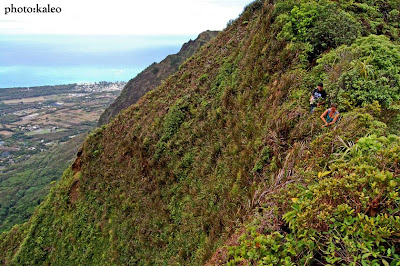 Brandi and Ian with a massive drop on their right side. 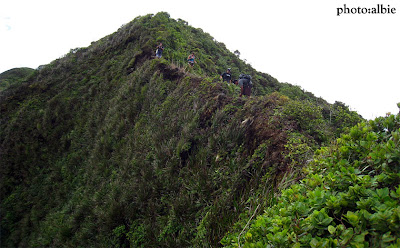 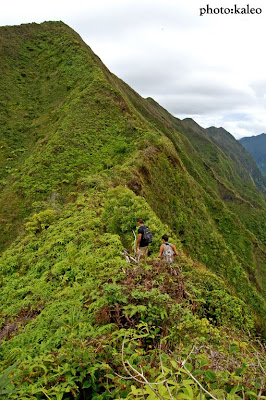 At the saddle between Pu'u O Kona and Kulepeamoa. 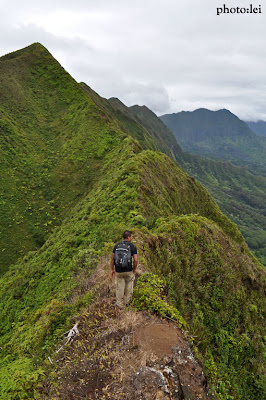 The ridge was a bit narrower at the saddle.  (photo: L. Yamasaki) 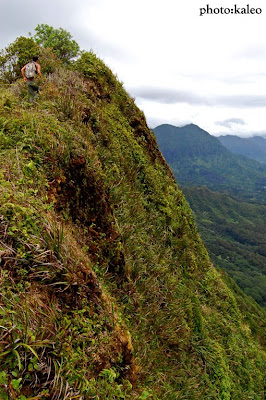 Lei on the edge. 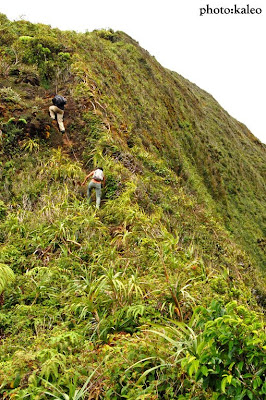 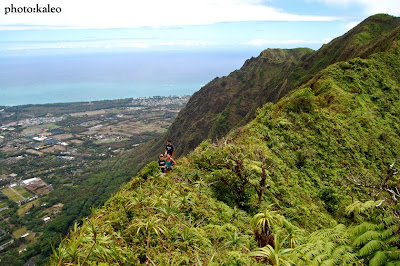 Ryan, Brandi, and Ian along the summit ridge.

this hike looks pretty sick. The pictures are real good

We did Wiliwilinui to Kuliouou last Tuesday. The views from the KST are awesome along the ridge. Great pics and awesome writeup as usual!